War is inevitable, but one day humanity may have to contend with armies not comprised of their fellow man, armies filled with things like aliens, demons, and ghosts with pirate hats. Business suits will be traded for battle armor, briefcases for guns, and prosthetic limbs will be covered in blades that evoke fear as opposed to being covered in inspirational slogans and promoting hope. Assuming that you’ll want to be smack dab in the middle of such a scenario (unless you wear diapers and even then, babies gotta earn their way) you’ll need to check your sensitive side at the door and prepare for levels of manliness not seen since Tarzan discovered performance enhancers. There’s much to be learned from the space opera that is Warhammer 40,000: Dawn of War II. 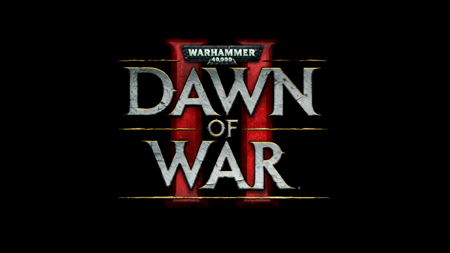 Using your brain will prevent the full depth of your brawn

I learned something today. When cavemen first walked the Earth, they dominated their social circles by being super muscular and overly aggressive. As time progressed, humanity went through a debilitating refinement of sorts, culminating in this skewed idea that your bench press and forty yard dash is not as important as your reading level or ability to hold culturally relevant conversations. With the threat of intergalactic mega wars looming overhead, the importance of reconnecting with our primal abilities will have to be our number one priority. Throwing boulders and beating enemies to death with their own severed limbs will be the only way to see humanity through to the next generation. I mean seriously, how many fist fights have you won with math? Thanks, Dawn of War II. 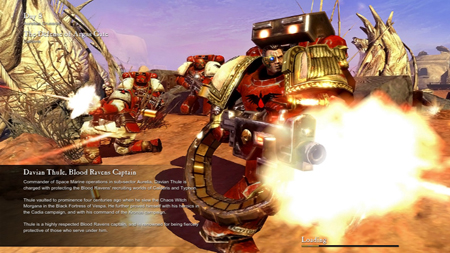 While not a scholar by any stretch of the imagination, this fella makes sure the smarty pants from his graduating class are safe enough to read their Harry Potter and study their physics

I learned something today. Upon first stepping foot onto the front lines, you’ll be asked to make a choice as to what weapon you’ll take with you into battle. The grittiness of the future will mean that anything goes, so the obvious choices include human size gatling lasers or half-sword-half-chainsaw hybrids with names like “Shark Slicer.” You may, however be tempted to grab hold of a mystical book and wield magic as your tool of destruction, but I can’t rail against this enough. While certain spells are powerful, the use of them requires the removal of your most prized sexual organs, thus limiting the amount of damage you can take in the thick of the fight. If dodging around behind your battle brethren like a fantasy fairy waiting for your mana to refill is your idea of being awesome, then by all means go ahead but don’t assume that the guys with spiked gauntlets and flame throwing goggles will sit with you in the mess hall. At the end of the day you’re a liability, so avoid the satchel full of pixie dust and reach for a fireball launching machine gun. Thanks, Dawn of War II.

Battle cries are the ultimate motivator

I learned something today. During the course of these horrific battles, you may be tasked with hefting a battle hammer and leading a charge of your fellow soldiers headlong into the advancing enemy. While an inspirational monologue right before the event is admirable, the effects dissipate rather quickly, only resulting in a short spike in morale and bravery that could have disastrous results once it has run its course. Instead, yell (not scream) something like “Today, our lion hearts drink forth from the flood of blood that pours from the corpses of our enemies” at the top of your lungs. This not only invigorates your troops, but also informs the enemy that you mean business. Thanks, Dawn of War II. 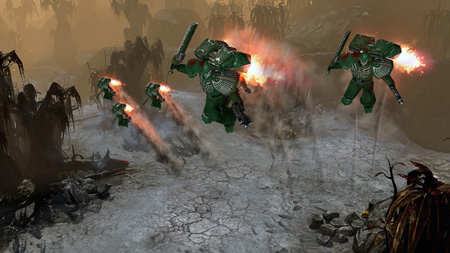 I learned something today. Scientists and other dorks like to throw around this idea of odds, which essentially means that an outcome has a better chance of occurring based on certain conditions. An unwavering belief in this system is the reason why people fear taking chances and run from conflict (usually with urine soaked pants) when the chips are stacked against them. I’m here to tell you that’s all just an excuse to validate cowardice and should only hold true to dudes that wear skinny jeans. When push comes to shove, the odds WILL be against you, but have faith in the fact that a solid internal heavy metal soundtrack and gorilla like levels of testosterone will provide all the inspiration you need to kill everything from an overwhelming numbers of alien grunts to Tyrannosaurus-sized robots with limitless ammunition. Sure it takes more than a big heart to rip through hordes of baddies, but that’s why anabolic steroids were invented, so enhance away and prepare to wear the flesh of your many kills as a big middle finger to any test tube jockey that promotes “realistic” odds. Thanks, Dawn of War II. 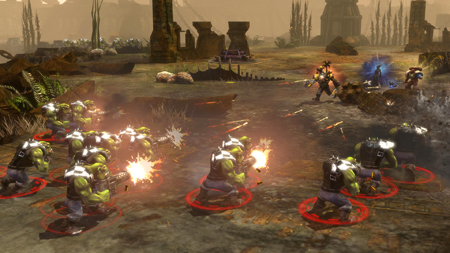 In the world of hardcore heroes, the odds are actually against these orcs

You don’t have to have a giant testicles to make it through wave after wave of horrifying monstrosities, you just need to act like you do (regardless of whether you’re slinging a P or sporting a V). There’s nothing pretty about war, and survival may mean getting jacked up on Mountain Dew and blind siding interstellar/interdimensional intruders with a fire axe and a chain. Thanks, video games.