Survival horror games were a staple back in the mid- to-late nineties; the fear and tension produced as a result of being ill-equipped in a worst-case scenario creating a game play experience that stuck with a person well into their dreams… or nightmares. Those golden days of horror have since gone away with over-the-top action replacing the methodical pacing of games like Resident Evil as a means to entertain more of the masses. However, while AAA developers may want the Michael Bay-effect to run rampant through their titles, indie developers like The Indie Stone have arrived just in the nick of time to breathe fresh air into an endangered genre with their zombie survival game Project Zomboid.

From the get go, Project Zomboid feels more like a sim game than what one has come to expect from zombie themed games as of late. Your character, a balding 30-something, isn’t a soldier, ninja, or grossly overpowered journalist, just a regular Joe Schmo trying to make it in a world that isn’t so bright and shiny anymore. Survival is not guaranteed, nor is it necessarily the goal of the game, as from the very beginning your death seems inevitable. 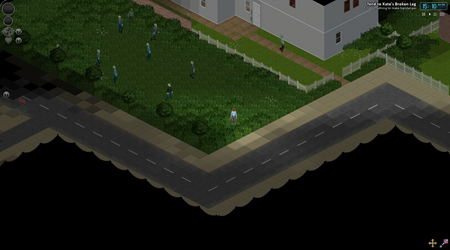 Essentially, your quest is about staying alive as long as possible, but that isn’t as easy as merely avoiding zombie bites or the unbiased shotgun blasts of looters. Like I mentioned before, this game is all sim and with that comes all the components of realism that distinguishes such games from their counterparts. The condition of your character is important, but it’s the amount of conditions your character can be in that separates this game from others. While health maintenance is important, it isn’t just about merely downing health packs every time your character gets scratched. All facets of physical and mental well being are taken into consideration as you play, so starvation, disease and depression are just as likely ends as succumbing to external injuries. 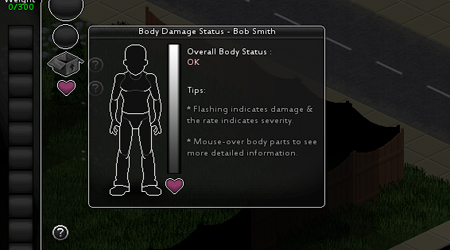 Being familiar with the medical profession doesn't hurt

Sometimes you just gotta run away

It’s this contestant awareness of the fragility of your character that builds tension and creates some rather frightening situations. The first time I encountered a zombie, I panicked (as did my character), a reaction I haven’t had since playing Resident Evil on the PlayStation. Caution is your best tool in Project Zomboid and cowardice is often rewarded with a few extra hours of life. When I first stepped foot outside the house I was hole-ing up in, I approached the game like so many others and quickly met my end at the hands of a zombie horde on the main street of the small town I was in. The next go around, I decided to travel through the many houses scattered throughout, and was iced by a fellow survival who was apprehensive about me sharing his inventory. Finally, it clicked and I found myself slowly walking through backyards, peeping in windows to scan for danger before entering any domicile, much like I would should such a scenario occur in real life. The Indie Stone should seek out a grant to fund this game as the World Health Organization could definitely benefit from the skills Project Zomboid could teach the global population in the event of a zombie crisis. 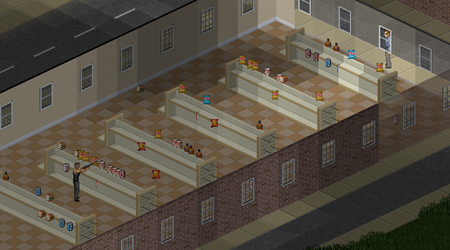 Sharing and caring are not as readily available in Project Zomboid

Another component of Project Zomboid that got my attention was the Minecraft/Terraria like distribution scheme that sees players purchasing an unfinished version of the game and following it through its Beta stages and testing until the final version is released (though pirates have put a wrench in the gears of the game’s release for the time being). While this means a somewhat buggy and incomplete package in the beginning (though this game has very few bugs and feels solid content wise, especially for only being a demo) constant updates and new content releases will keep the game fresh and worth sticking with for quite some time.

All in all, Project Zomboid looks to take the idea of surviving the zombie apocalypse very seriously and gives players a fun, challenging and truly unique alternative to what is being offered elsewhere. Lovers of the undead or those that are uncomfortable with their spouse’s level of zombie preparedness can all find something to enjoy here, though don’t be surprise if you start to view the end of times differently after running headlong into the realism that Project Zomboid has to offer.

Project Zomboid is available now as a demo/pre-beta version with the full version due out in the near future.