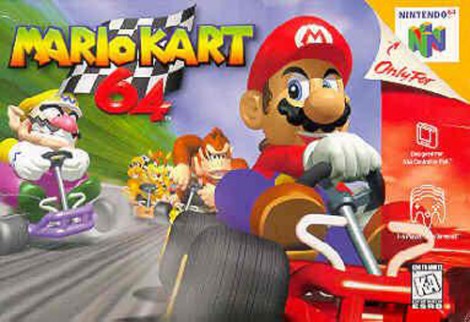 The Mario Kart franchise has historically been my ice breaker with new gamers. With its recognizable characters, easy to learn pick-up-and-play gameplay, fun powerups and varied track designs, there are more than enough hooks to grab gamers of all skills and ages. Sure, it was fun with a buddy on the SNES, but for me, Mario Kart 64 was my catalyst to get a whole group of friends interested in games. MK64 supported up to 4 players at once for the first time and, with the Nintendo 64, the game introduced groups of people to friendly 3D visuals. Needless to say, there were plenty of racing opportunities. Which also meant, in my many play sessions with friends and family of a wide range of video games skills, I had plenty of opportunities to lose in infamous fashion.

Mario Kart 64 will be one of the featured games in the Mario Madness tournament at Horrible Night Out on July 8th.

Now, some of this is going to come across as cocky, when it should just be more of an example that I played way too much Mario Kart 64. However, anyone who has ever played a game that they are really familiar alongside someone who is not, it is important to be somewhat aware of his/her experience if you want to keep playing with him/her. Don’t beat them to a pulp, keep it competitive, show them how to have fun, but don’t let on that you’re going easy on them. That’s why I love Mario Kart 64 – it doesn’t take long for a new player to find his groove. Which I usually remember about a lap too late. 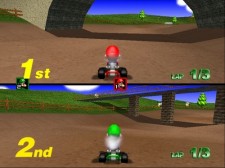 I was being nice to you.

Driving is such a small part of Mario Kart once you know how to stay on the track; it’s all about the items (and understanding that players who are losing get better items). Even the best snaking powersliders can be taken down by the fate of a few random items. While new players aren’t necessarily the best shot with shells or banana peels, lightning and mushrooms quickly become their best friends.

When teaching a new karter, I tend to stay just ahead of them and aimlessly drive side-to-side while answering their questions about each of the items and trying to teach them to powerslide. One particular training session, though, taught me something I didn’t know about one of the new items in the game. About 2/3 of the way through the final lap, the other racer picked up the lightning powerup. It took me a while to explain what was going to happen when the item was triggered. He triggered it just before another block of powerups, my kart shrunk and spun out into a random banana peel. Meanwhile, he obtained a super mushroom and accidently double tapped his trigger, unveiling to my surprise that you could hit the super mushroom boost as many times and as often as you wanted (I thought you had to time each boost). Before I knew it, we were neck and neck as my kart finally recovered. The final powerup row was upon us, and I foolishly pushed into them while in first place allowing him to receive a star powerup. He blows by me as my green shells wait harmlessly by my side. You beat me on your first race, ever, I know. I’m so happy for you.

The other stars of Mario Kart are the tracks themselves. Personally, I come back to Mario Kart 64 for Toad’s Turnpike, Choco Mountain, and Wario Stadium. They are the tracks I will forever associate with the franchise. Every track in the game has a standout feature, the best of which you hardly notice until they make a difference in a tight race.

The train in Kalimari Desert seems relatively harmless at first. It’s big, slow moving and can’t really surprise you. But dammit if it never fails to get in your way at the worst time. I was trailing multiple racers in the desert when I picked up a star powerup and triggered it to catch up. I came up to the crossing and 3 racers were stopped at the tracks waiting for the train move through. Ha, no waiting for me. I was invincible. That is, of course, until my star power ran out mid-train and my brilliant race maneuver ended up being a comedic aside for the real race to the finish. Are you not entertained? 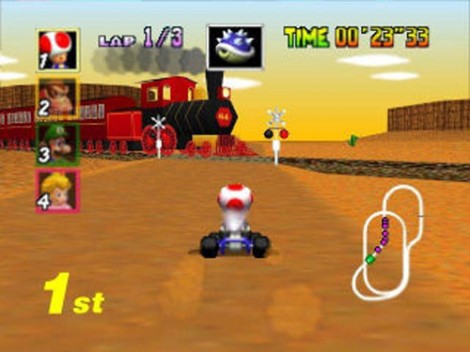 Trains are hard to hit.

Fruitless final thoughts during other races

Do you know how to use that?

Then, of course, there are the famous Mario Kart shortcuts. None of which is more satisfying to pull of than the Rainbow Road jump. Sure, I had used this trick to show off to others or even to illustrate to new gamers that there are different ways to play the game. But really, this was the shortcut made to toy with your enemies. Rainbow Road is an excruciatingly long track. Most of the time the race is well in hand by the end of the first lap, as long as you don’t screw up. So, as I had this race won, and the entire Special Cup in hand with my victory, I wanted to make things interesting. On the final lap, I stopped on top of the shortcut hill and allowed my rivals to pass me. They were already punching me and cursing at me as they knew exactly what I was going to try. It was a dick move, but they deserved it and my ego needed a boost for the day. As the karts raced near the landing point, I made my move. As I drove into to position to leap off the hill and land just ahead of the pack, I didn’t take into account the last place racer. Just as I jumped, Toad comes squealing by and bumps into me. Instead of gracefully/douchely landing in first place, I fell to my demise and completely missed the track. Had my friends not held me down, I may have shut the game off out of spite. I hate Toad to this day. 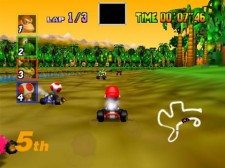 It's not the racers you have to worry about.

I don’t normally have much fun losing at video games, but you have to have a sense of humor with Mario Kart. This series is timeless for a reason and it isn’t because of the level of competition at the highest level. It is because at any moment anyone can fall, whether from a skilled opponent, random chance, or their own carelessness. Don’t worry, I’m sure it was the controller’s fault, too.

2 Comments → Mario Madness: How to Lose at Mario Kart 64