I think it is safe to say that most of us at Horrible Night are huge fans of the Mass Effect series. I might even go as far as saying that it might be one of our favorite video game series of all time. That being said, we may never really know what one of the main character’s looks like. Tali’Zorah, Commander Shepard’s faithful companion in battle (and sometimes in the sack) is a mask-wearing, master mechanic Quarian who can not remove her mask due to her race’s weak immune system. 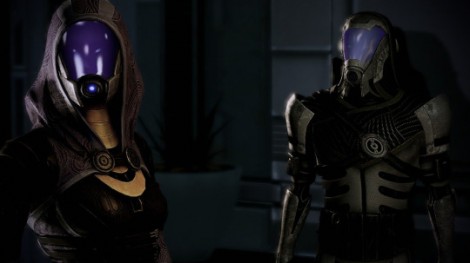 Pay no attention to the girl behind the mask.

The team at BioWare has avoided discussing the mask because no matter what it decides, not everyone is going to be pleased. Some would be happy with the choice, while others would rather have Tali’Zorah’s face remained shrouded in mystery. In an interview with Computer and Video Games, Mass Effect 3‘s Art Director Derek Watts had this to say:

So we’ve had a lot of debate over Tali’s face, but that’s the one we kind of dread a lot. We’re always “well, let’s talk about something else for a while!” That’s something we’re going to have to decide.

The team at BioWare has redesigned the look of many characters in the game which won’t make everyone happy. However, people have to remember that it’s Mass Effect and it is my unbiased opinion that, without a doubt, it is going to be awesome. Find out whether or not Tali’Zorah’s face is revealed next March when Mass Effect 3 is released.