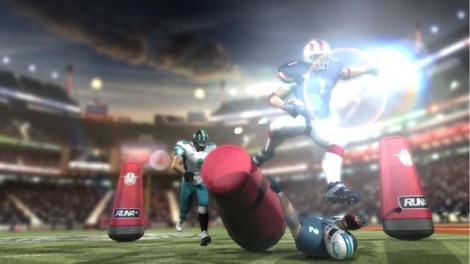 Last June Backbreaker, the football game without an NFL license, hit stores with a resounding, “Meh.” It was a cool take on football, using physics to produce realistic looking moves and tackles. It didn’t rely on the canned animations that EA and the Madden series has used for years. NaturalMotion has taken a step back from releasing a full retail sequel of the original Backbreaker and will be releasing a fast reflex, high scoring based game on the XBLA next week and on PSN later this summer.

Backbreaker: Vengeance will consist of 3 mini-games that will have you challenging your friends to sit atop the leaderboard. Tackle Alley, which was in the original game, has you carrying a football across the field trying to make it to the endzone. If you think it sounds easy, there will be obstacles like other players, out of bounds zones, and obstacles in your way. As you move up in levels, more opponents will be added to the fray to make your life as a successful running back a short one.

The other two modes Vengeance and Supremecy sound like a ton of fun as well. Who would have thought that a game with football as its setting, isn’t really about football at all? Even if you aren’t a fan of football, don’t be afraid to pick Backbreaker: Vengeance up on June 29.