While I love the idea of stomping around a battlefield in the cockpit of a mech, I’ve had tepid feelings towards the mech games I’ve been exposed to. Despite being a ridiculously awesome vocation on paper, I’ve never had much fun piloting these robotic power suits in the digital world as I feel stuck between playing overly complicated simulator games and stupidly simplistic perversions of mechanized combat that only a Nascar fan could appreciate. I imagine Double Fine studios had goals to eliminate some of these frustrations going into the creation of Trenched, as the game is a very approachable action title with enough strategic elements and customization available to keep a wide spectrum of players satisfied. 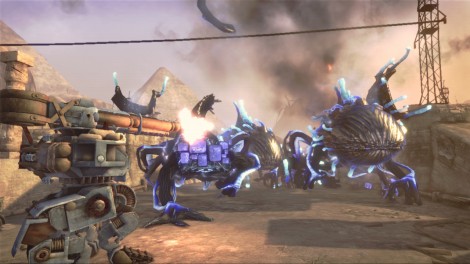 Egypt will never be quite the same

Unlike some mech games (talking to you Front Mission Evolved), Trenched never tries to take itself too seriously, introducing a world where manliness trumps social graces and ammunition never runs dry. The story begins when two radio operators attempting to crack enemy codes happen upon a strange broadcast that kills their fellow soldiers, but turns them into super geniuses for some unexplained reason (both did have facial hair, which is reason enough). After they recover from the initial shock of the event, both men go on to contribute their brainpower to society, the good guy (Frank Woodruf) inventing mechanical legs (referred to as Trenches) for disabled vets and the bad guy (Vladamir Farnsworth) inventing TVs that later turn into world conquering monsters called Monovisions. Your character begins the game many years after these events, with a full scale war being waged between the mechs and tv monsters (ridiculous premise I know, but it works). The narrative woven throughout the story never gets in the way and is actually pretty funny at times, though I would have liked to be able to skip through cutscenes after already seeing them once.

Tower defense minus the waiting

Trenched takes a different approach to the mech genre as it plays closer to a tower defense game than a full blown action title. Each level begins with a strategic asset to protect and you’re tasked with setting up base defenses (in the form of light, support and heavy towers) in order to keep the invading waves of Monovisions at bay. Like tower defense games, there are predetermined paths that your enemies take towards the asset, so you have a general idea of where to be and what sort of structures you need to set up. Tower placement happens in real time, so you have to be quick or else the Monovisions will be on top of you quickly. The Monovisions themselves are very interesting opponents and feature multiple variations with different strengths and weakness (such as flying enemies, armored enemies, and kamikaze Monovisions that focus all their explosive anger on you).  In a gaming era where zombies and terrorists dominate the landscape, it’s nice to see some creativity on display.

The Trench vehicle itself stands in the way of the usual passivity seen in most tower defense games, allowing you to directly combat enemies as opposed to sitting and watching as streams of bad guys march down long, windy paths. The levels are built around this concept, giving you just enough room to maneuver but not so much that tracking the Monovision assault becomes  a pain. The levels aren’t anything too exciting, but they serve their purpose well (besides, explosions happen so often that you won’t have time to take in the scenery). There are fifteen missions total, all spread throughout different areas of the world, with a boss appearing at the end of each five mission section. The boss battles are fun, all of them epic in size and ability, though they aren’t all that difficult since you only have to worry about the health of your Trench in those scenarios. Still, the boss battles help with the pacing and combat monotony, something that tends to bog down other games where the action doesn’t change too drastically from level to level. 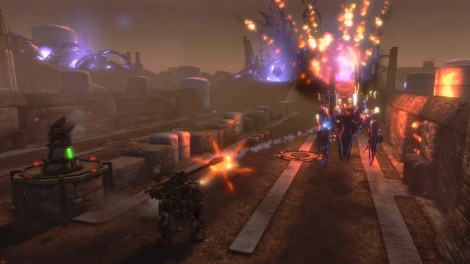 Your Trench is not invincible, so keeping you character upright is just as important as protecting the asset of the levels. As such, making your pre-mission equipment selection incredibly important. Customization has always been an uncompromising component of mech games and Trenched does well to keep with its genre’s tradition. Alongside the many weapon options you have (including machine guns, sniper rifles, canons and more), you are also able to select the chassis and legs of your trench (all with different attributes) as well as different base defense towers. There are many different combinations of trench and tower parts that one can chose, though they tend to revolve around classes such as engineering (cheaper towers, more options) assault (more guns) heavy (bigger guns)  etc. Options are great, but the unfortunate part of the game is that most missions have a specific type of Trench build in mind based on enemy types and taking the path less traveled tends to end poorly. That being said, the sheer number of choices within these “constraints” are enough to stave off that feeling of hand-holding that most people hate.

In addition to modifying your Trench to fit your play style, you can also dress up your pilot in different clothing, though it’s purely aesthetic. I kept my guy pretty standard, but there’s enough here to help differentiate yourself from the people you decide to play online with, you know, if that’s your thing.

Reach out and grab somebody

Trenched features a 4-player cooperative mode which enhances the fun factor greatly and also makes it easier to earn better scores on the levels. Putting together a party is really quite easy as I was able to join up with 3 others within a minute of searching for an online game. It’s not without its problems, however: 4 players on-screen causes some slow down, especially when the action ramps up. There are also a number of missions that are flat-out too easy with 4 people. This is nothing a title update can’t fix, but if you have the option, keep your parties to no more than 3. While it’s not currently available, I think it’d be nice to see some competitive modes introduced via future updates or DLC in the way that Plants vs Zombies did where one player controls the Trenches and one the Monovisions, as well as versus mode. It just seems that after all the work it takes to earn the best gear in the game, you’d want to show it off to people, AKA, shooting at them.

The game looks decent, runs smoothly (minus the co-op issues) and sounds exactly like a war between television monsters and robot walkers should. It features a gritty look that is based off the old “adventure man” magazines from the early twentieth century, a time where metrosexual equated to staying home to help the women folk with the cleaning (times have changed, now I’m doing all the cleaning… Trenched came at the perfect point in my life). If I have a complaint about the design of the game at all, it’s that the Monovisions have a very annoying death scream that you hear quite a bit (unless you suck at the game). My ears didn’t bleed, but my wife did complain and the cats stayed far away from the man-cave. 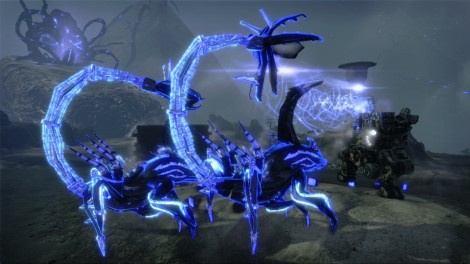 We wouldn't be so shrill if we liked to die

At 1200 MS points, Trenched is a huge deal and offers plenty of replayability, especially given its multiplayer options. It’s a short experience but I’m hopeful that Double Fine will support the game with DLC as it has an incredible core that can only get better with further updates.