In the future, we will all be soldiers. Whether it’s fighting against each other or some robot overlords bound and determined to enslave all humankind, there will be war. In order to prepare for such a calamity we need to train ourselves in the finer arts of high tech fighting. I’m already well on my way to being the leader of men thanks to the lessons I learned from Crysis 2. 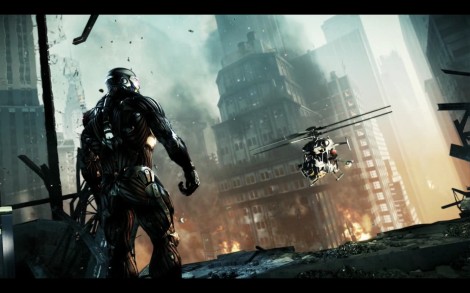 Helicopters are no match for super suits.

The Lessons of Crysis 2

When invisibility is an option, take it

I learned something today. In a world that is overrun by evil humans, robots and possibly aliens, turning invisible might be the best option for survival. Because of outrageous bravado, I’ve often found myself fighting alone. In certain situations, continuing the “solo” mission means sure death. However, because of this super technological suit I picked up that washed ashore after a submarine explosion, I have become almost god-like. I say that because gods are usually invisible. That’s the only thing I have in common with them. Anyway, turning invisible when faced with insurmountable odds makes the chance of survival a little bit higher. Sneaking up on enemies and slapping them with the butt of my gun till they die gives me a satisfying thrill, yet usually pisses off their friends. An important thing to remember: invisibility only lasts so long. Make sure you find cover before that happens or those pissed off friends will be pissing on your dead body after they embarrass you in ways to0 saucy to mention here. Remember the rules of the invisible suit and you might just make it to the next hostile takeover. Thanks, Crysis 2. 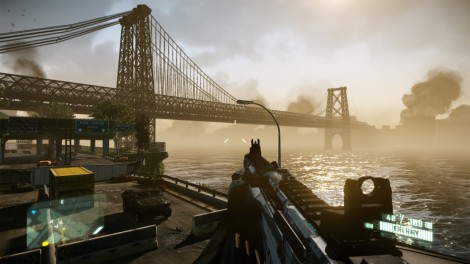 I can get to the top with my sick vertical.

I learned something today. Remember the time before war, when athletic achievement was all the rage? Athletes would earn millions of dollars because they could perform abilities that wowed the average man. In basketball, a high vertical jump was looked upon as one of the most outstanding athletic feats man could achieve. Anything above 40 inches was considered otherworldly. Now, with my technologically advanced war suit, I make those “athletes” look like “mathletes.” Jumping high has become a fun way to shoot dudes in the head for me. I’m constantly jumping around like a rabbit on meth that just slammed an 8-ball of cocaine for dessert. Nevermind the fact that when I come down, I bring the thunder down with me. Don’t be in my vicinity when that happens or you’ll be flattened like roadkill with no hope of being scraped up. Like the invisibility skill, it will drain your suit dry of energy. Don’t get into a jumping contest if you can’t keep up the juice in your suit. You don’t want to be the laughing stock of the JRL (Jumping Race League). Thanks, Crysis 2. 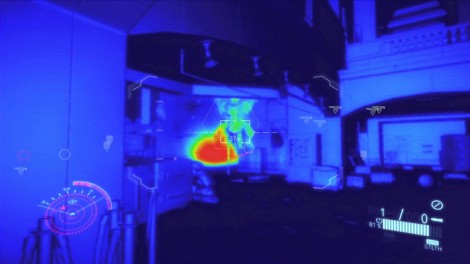 I see you, red blob of heat.

Heat vision opens up the indoors

I learned something today. You remember back in the late 20th century, when they had those things called action movies? One in particular caught my attention because of the unique viewpoint the antagonist (or is it protagonist?) used to hunt his prey. Using infrared heat vision allowed this “predator” to kill the people who were trying to kill him. Now, there is technology that allows regular humans like myself to employ this method of vision. In the war to save humanity, I’ve been known to employ this so called “heat vision” to see my enemies who are hidden behind walls or barricades. It’s been extremely helpful in keeping me alive. What did I do before this innovation? I stayed outside. Being outside allowed me to be aware of my surroundings at all times. I didn’t have to worry about cautiously walking through doors. It kept me alive but cold. I’ve been diagnosed with a unique kind of agoraphobia, called claustrophobia. I love free wide open spaces with enemies, but hate those closed off rooms where anything can happen.  Now, that I have “heat vision” I’m no longer afraid to go inside because I can see you behind that wall. Thanks, Crysis 2.

Wearing a technologically advanced suit during a time of war definitely has its benefits. I can turn invisible and become a creeper, jump like that basketball playing dog, or have the same kind of vision that led to the early demise of Jesse “The Body” Ventura. But the suit also has its downsides. You have to watch the energy meter to remain safe. If I could teach you anything, it’s watch your meters. Thanks, video games.