I know you’re probably dead and bloating from holding your collective breath awaiting The Horrible Show’s E3 Wrap-up, but in the off chance someone let you know that the digital recording gods smote us and smote us hard on Tuesday night and you’re still with us, here’s my look-back at the Big 3’s E3 performances. 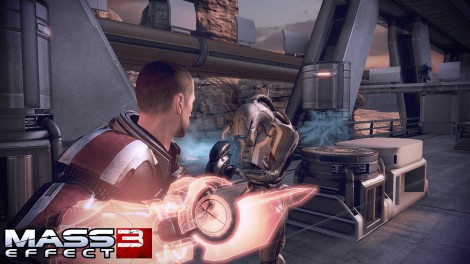 Don't bring a knife to a gun fight. Unless it's an energy knife, you're Cmndr. Shepard and you're killing Geth.

In terms of slamming down a gigantic friggin’ gauntlet to create a line…no, a trench in the sand about who you think really pays your bills to your competitors, you can’t do much better than Microsoft did this year with its game previews. Let’s name-drop: Halo 4, Halo Anniversary Collection, Mass Effect 3, Gears of War 3, Call of Duty: Modern Warfare 3 and Tomb Raider. I always get a warm, fuzzy feeling when I hear a bunch of games I really want to play announced and not hearing the word “experience” used to deflect real questions makes me excited in an almost-inappropriate way.

Of course, Microsoft had to spend a bunch of time talking about how cool the Kinect was, but other than Tim Schaefer, I really, really don’t care. Even for a Star Wars junkie like me, Star Wars Kinect looked more like Episode I than Episode V, if I want DisneyWorld, I’ll get on a plane (and I hate flying), I’ve got a d-pad for controlling my Mass Effect 3 squadmates and if I want info, I’ll use Google. And a keyboard. Okay, to be fair, Microsoft’s trying and even with all of the crap I give it for attempting to get me to want to play a game in a way that doesn’t encourage an increased BMI, the Kinect has a lot of potential to be a cool product (Child of Eden comes to mind). Still, I think that this is where Microsoft stumbled. It had a lot of important news to share that got left out in favor of Sesame Street. (Please don’t take that the wrong way, Big Bird, it’s just that I’m no longer a child and my experimentation with getting high was short lived and quite some time ago). For example: Summer of Arcade 2011, the new, new, new, new XBL Dashboard experience and, perhaps most importantly, friggin’ cloud storage and beacons! Seriously – they spent time on Dance Central 2 instead of this stuff? Anyway. If I didn’t think saying one company “won” E3 was absurd for reasons beyond the fact that it’s completely subjective, I’d say Microsoft “won.” But I do think it’s stupid, so I wouldn’t say that. Moving on.

I know it seems like I’m a Nintendo hater, but I’m really not. Pre-Wii? Bad-ass. They even made some grownup games. My negative reaction to them over the last few years has been a combination of dismay and frustration – dismay because I really want to like what they’re doing and I can’t and frustration because I realize I’m no longer their target market. If Nintendo’s slightly…odd press conference did anything for me this year, it was to confirm that it’s just not interested in regaining me as a customer. That’s cool – I’m going to treat it like a grown up treats a break up: wish them the best and move on with my sexy, new girlfriend.

What about Nintendo’s show made me realize that our affair really is over for good? It’s all he-loves-me-nots, unfortunately. First, I don’t like 3D. It’s a rant I’ll save for later, but I think it’s a gimmick, it’s an immature technology and basically, I don’t care. Second, I’m not going to buy a mobile gaming platform. I’m not badmouthing the impressive tech Nintendo’s got in the 3DS or saying that there aren’t great games on the DS (and will be on the 3DS, eventually, I have no doubt of that); I’m saying when I’m on the go, I’m not going to spend a bunch of time playing, which is why my smartphone’s enough for me and when I’m at home on the couch, I’m going to play in HD on my big TV over a handheld device every, single time. 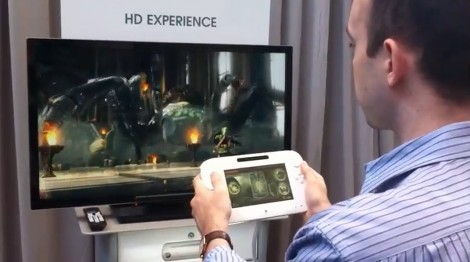 How about you show of some IP developed after the USSR collapsed?

Then, there’s the Wii U. Let’s take a moment and recognize Nintendo’s incredible accomplishment in coming up with the worst product name ever. Wider and deeper, indeed. Alright, moment’s over. If you saw the Wii U demo and say that you weren’t confused, you’re a damned, dirty liar. I’ve had some time to reflect upon the demo and I’m in agreement with some “apologists” that Nintendo may have been forced into demo-ing an unfinished product because it got leaked, so I’m sympathetic. Nonetheless (and this is based on things I’ve read since E3), Nintendo’s neither willing to admit that, “Well, gee, guys, it’s kind of still in beta a little bit, so we don’t have a lot of info for you,” nor give any concrete details and basically been pretty squirrelly. There’s no DVD or Blu-Ray coming with the system, I’m completely unaware of whether you can use more than one controller (or, really, anything else about the controller) and it apparently hamstrung one of its developers when questions came up about technical specs that a developer would undoubtedly know. It’s early days yet, but even though Nintendo’s going HD (woooo! #sarcasm), it’s appearing that I’m going to go through another system cycle with no Nintendo product in my house.

With the exception of Sony’s handling of the PSN issue, I look at them the same way I look at Acura. I drive a Saab. It’s my second one and I love it. Doesn’t mean I hate Acura or people who drive Acuras, it’s just a different brand than the one I own and happen to like very much, so my opinion of Sony’s E3 appearance is pretty neutral. Sony introduced the Vita, its new handheld that looks pretty sweet, technically. Apparently, it’ll even let you play versions of games you can play on your PS3, like Uncharted. Even though Sony made the…questionable decision to tie the Vita to AT&T as its 3G carrier, the demo looked great and if someone buys one and lets me play with it for a while, I’m sure I’ll be amused. However, as I said above regarding the 3DS, I’m not dropping cash on a gaming-only handheld and the concept of playing the same game on a small screen whilst sitting on my couch that I could be playing on my console is mindboggling. I squint enough at work, thanks. I’m beginning to get the feeling that Sony’s counting on having the strongest tech to pull them through, yet, I’m not sure that’s where the answer lays. The PS3’s more powerful than the 360 and yet the 360’s setting the rules for how to do an integrated system (XBLA, “apps” like NetFlix, Facebook, etc., replacement of UVerse set-top boxes…) 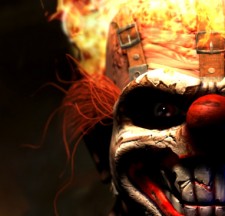 Ladies and gentlemen of Sony's board of directors, allow me to introduce our new chairman.

Other than the Vita, Sony had two major parts to its presentation: a sincere apology about the PSN debacle, which I applaud wholeheartedly (even if it was a little late) and Uncharted 3. If there were anything that could get me to buy a PS3, the Uncharted series would be it. The problem is that…how do you follow up Uncharted 3? I’d suggest The Last Guardian or Twisted Metal. Team Ico is a visionary developer whose ability to create awe is among the industry’s best and Sweet Tooth was practically an unofficial mascot of the PS1 &2 (not to mention David Jaffe’s rockstar status and last year’s Twisted Metal showcase). What I wouldn’t suggest is Medieval Moves or a really, really lame demo of Resistance 3 (especially since that’s going to get your core gamers excited if it looks like a blockbuster) but that’s just me. <Shrug>. Overall, Sony’s press conference was fine, but shuffling things around a little so as not to blind the audience to everything else you’re demoing by showing Uncharted 3 right off the bat could have made it much more impressive. (Oh, and…could Kobe Bryant have looked any more awkward?)

I’m left with mixed feelings about E3 this year, but the one that rises to the top is the question of E3’s identity. Is it for stockholders, gamers, journalists or developers? Is it for everybody? I think that’s where some of the eyebrow-raising came from this year: none of the Big 3 were certain who they were presenting to and, as a result, the whole show suffered. E3 was scaled down before and, while I don’t think it needs to be shrunk, perhaps the exhibitors (dev houses and peripheral makers, included) need to have a sit-down and figure out who their audience is. Maybe I’ll be less snarky next year as a result. And maybe monkeys will fly out of my butt. Tshyeah.