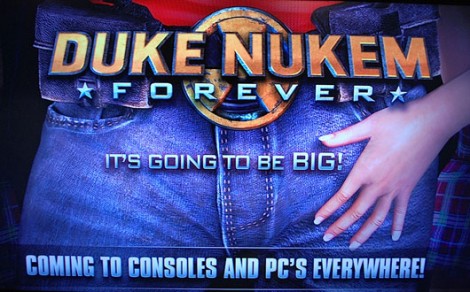 As many of you may know already, Duke Nukem Forever didn’t exactly dazzle anyone despite the insane amount of teasing and hype surrounding its long awaited release. Feeling the need to imitate a mother bear protecting her cub, The Redner Group (the PR team behind DNF) lashed out at the game’s critics, stating: “Too many went too far with their reviews…we are reviewing who gets games next time and who doesn’t based on today’s venom.”  Their review of reviews in order to determine who gets games for future reviews is pretty confusing, so I reviewed the story a couple times to make sure I didn’t miss anything.

In a short interview with Wired, Jim Redner apologized for his statement, going on to explain that the passion he had for his project pulled a full moon transformation and became oral diarrhea before he had a chance to lock him self in a magical cage and prevent innocent casualties (well, that’s my interpretation of how the twit slip came about anyway).  Duke’s publisher, 2K Games, promptly distanced themselves from the statements and noted that the Redner Group will no longer represent the company or its games.

I’ve yet to play it, but Jeff Gerstmann’s review avatar has an angry look on its face, so I can only assume the game either sucks or his avatar needs an attitude adjustment.  I can’t blame Mr. Redner for getting hyped since I punched a grown man in the kidney after an art fair project from my youth didn’t win best use of melted crayons and glitter. Unfrotunately for Jim, the internet has a way of making you look like a huge baby when you’re acting like a huge baby, despite where the tears originated from.