I’ve been getting a lot of entertainment from the reviews of Duke Nukem Forever. Let’s just say I’m glad I’m not in a position where I have to review the game on its artistic and gameplay merits (there’s no point). I’ve known for a while now that I pretty much have to own Duke Nukem Forever. None of those gamers and journalists ripping the game to shreds out of exacting some sort of misplaced sense of revenge can phase me. I’ve been over all of the arguments against the game in my head and here’s how it adds up to my purchase of Duke Nukem Forever. 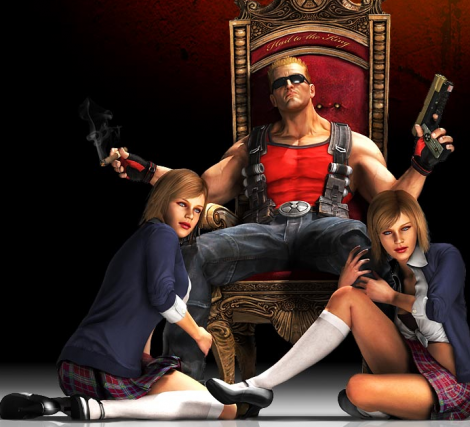 Not a good game

Good may be pushing it. Some are even going as far to say DNF is flat-out broken. I’m sure compared to modern shooters or even shooters 5 years ago, it is going to feel broken and unplayable. I highly doubt though that game breaking bugs & glitches are going to be rampant in this game. It will be a finished game, it will be playable, it’s just likely that DNF is truly terrible. I know this, I expect nothing less from a game that started development over 14 years ago. There comes a time where, if you haven’t made a game and stayed in touch with newer audiences, then your game is going to be out of touch and feel archaic. Which brings me to my next point.

I wouldn’t have bought it before 2010

I’m not even sure I would have bought DNF when it was originally slated for a release. When things went completely off the rails, you knew back in 2002 that there was no chance for this game to be good. That wouldn’t have stopped “them” from telling you that it was a great game if it was ready for release or that DNF  was the cutting edge title you had to own. That it was going to redefine shooters. The fact is, Duke Nukem Forever had a very small window for a chance at greatness and it closed way before anyone was willing to admit it. Anyone who thought otherwise after 5 years of development was out of his mind.

The original Duke Nukem 3D is small sentence in my gaming history. I was DOOM nut at the time and the only reason I played DN3D was for the one liners, which were damn hilarious to a 16 year-old in the mid-to-late 90s. My love for the game came from gore, boobs, curse words, explosions and cheat codes. I didn’t have the patience to actually play the game, as I was already getting burnt out on shooters. So invincibility, all weapons, and unlimited ammo were the only way to play. Sure, Duke had his share of novelty weapons that were fun to show off to friends or to use the first few times, but the action itself was never fun or groundbreaking. It was everything else about Duke that made it memorable. The levels, the “story,” the pig cops, the offensiveness, it was all a show. A dumb action movie that was a blast while it lasted. I treated games like Duke as mods for the games that I really loved that were actually pushing gaming forward. Duke was a distraction until the next big tech upgrade came along. It was a necessary distraction in hindsight, because not every game should be a tech demo (Quakes) and it’s important that games have a bit of character and personality to set themselves apart. That is why we remember Duke.

Because of my views of Duke Nukem 3D, I never held the 3D Realms in high regard as a develeoper. Its biggest strength, to me, was survival. It made a few stellar business moves as a publisher with putting out Max Payne, and things may have turned out alright had Prey held up to its original promises. Its development portfolio, though, just didn’t instill a lot of faith in its ability to pull off Duke Nukem Forever when the years started to drag on. Its insistence that it was still going to come out and be great, year after year, began to grate on me as a fan who really wanted to believe. I wanted to see Duke Nukem Forever come out and fuck with everyone’s heads. I wanted it to be memorable and I even had a little hope that it could be great. Then, the whole waiting period and random screenshots just became a joke, one that 3D Realms never got in on. Somehow during all of this, it thought that it was a id- or Valve-level developer that could get away with the “when it’s done” mentality. Ignoring the fact that we’d all seen their story before with Daikatana and John Romero and that story only had a “merciful” 4-5 year life cycle. The best Duke Nukem Forever could hope for was for a completely new developer with recent experience to save the game and build it from the ground up. That never happened. 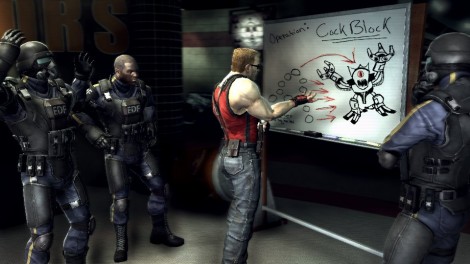 What we have now in 2011, is Duke Nukem Forever HD. A reskinned version of a game that never came out. Having not played a single second of it yet, I can tell you that the shooting will be tired, the map design will be confusing and require backtracking, the jokes will be corny, the boobs will be plenty and pointless, nothing about the setting or story will make sense…but it will be playable. There will be nothing ironic, satirical, or defensible about the content. What we have here is everything that was wrong with video games and every nightmare of what the conservative press thinks all video games are. It should set the industry back. Thankfully, it won’t, and that is Duke Nukem Forever‘s saving grace.

Duke Nukem Forever was never reborn. A developer did not come into recreate and update its original vision. While Gearbox did come in at the 79th hour to finally finish the game. All Gearbox did was stitch together the pieces so that Duke Nukem Forever could actually be called a game. That is all. If this was 1998, perhaps some would even think Duke Nukem Forever succeeded. Instead, Gearbox just embraced what Duke Nukem Forever truly was, a game from a different time that, for better or worse, the industry needed to be released. There’s some honor in that, and that is the core of why I am supporting Duke Nukem Forever in 2011. It serves as a time capsule of the era that brought me into being obsessive about video games, and I’ll get behind anyone who holds that up. 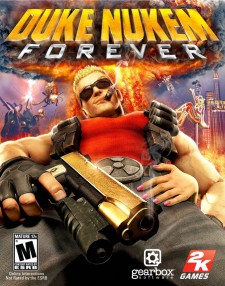 No one cares if you aren't laughing.

The only end for Duke Nukem Forever that I could get behind has happened. Development went on long enough that it was no longer funny, 3D Realms paid the price for their stubbornness, and Duke no longer speaks for the game industry. If  he did, I’d be on the front lines bashing everything about this game trying to bring it down to Earth. Duke crashed a long time ago, but that dust has cleared, and we are now left with a game case in front of us, laying in the dirt. It’s harmless, it’s testosterone in a box, the dumbest of action games. Play it and relive an era that made us gamers. You don’t have to stay long, as I can’t wait to go back and then immediately move on to gaming’s next great chapter. This one is over. Play it, smirk at it, walk away, and toss a cigarette at Duke Nukem Forever to give it the send off it deserves.