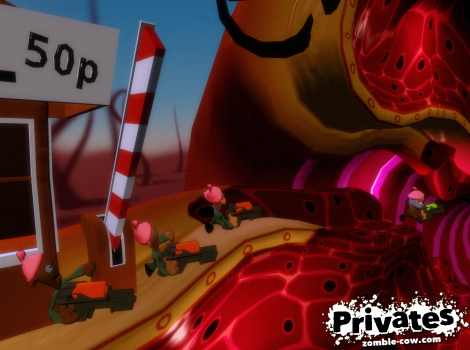 We’re off to see the wizard…wait what?

In last week’s newest Horrible Night Feature, Reply to All, we covered the game Privates. In the game, developed by Zombie Cow Studios, condom-hatted marines dive in between the legs of a woman and fight off monsters. While not the most pleasant of scenarios involving a woman’s vagina, it definitely gets points for originality. However, that originality doesn’t seem to be getting it very far in terms of a publishing agreement.

Microsoft answered the speculation in a statement made to the Seattle Post-Intelligencer:

This game has not been submitted to our pre-publication peer review process, and it has not been approved for distribution on Xbox Live Indie Games. We have guidelines in place that closely track requirements of content ratings boards worldwide and, among other things, prohibit the publication of strong sexual content.

While we haven’t seen this game, we can confirm that if it is consistent with the description we have seen on the Internet, this game would not pass peer review and would not be permitted to be distributed on Xbox Live.

Zombie Cow Founder Dan Marshall doesn’t seem to be worried about eventually releasing the game on XBLA. He said in an interview with the Seattle PI, “it’s one of those bridges we’ll just have to cross when it comes to it.” Are they still going to release the game on XBLA or will they bow to pressure and make enough changes so it could be released? They still plan on releasing it on the PC, which doesn’t have the publishing standards that Microsoft does. It seems unlikely they would release two separate versions of the game.

The controversy is bound to raise the level of awareness and interest in Privates, which is probably what they wanted in the first place.