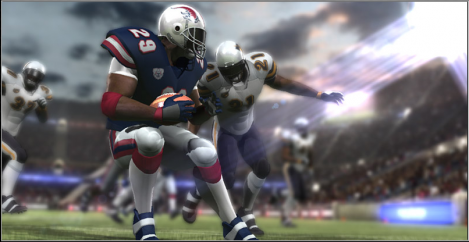 A couple of years ago, NaturalMotion announced that they were working on a physics-focused football game called Backbreaker which would be developed using their Euphoria engine. Since then the Euphoria engine has gone on to power games like Grand Theft Auto IV, Star Wars: The Force Unleashed, and, more recently, Red Dead Redemption. However, Backbreaker had only been seen as a browser based mini-game and on the iPhone. It was starting to look like the original Backbreaker videos were just a tech demo, not a full game. That was until new trailers started coming out in the last few months, and this past Friday when the Backbreaker demo showed up on the Xbox Live Marketplace.

What surprised me the most about the demo was just how different the game feels from any other football game that I have played. Regardless of the presentation and the graphics, which are forgettable at best, it’s the ever so slight change of camera perspective that makes it feel so much different. The game makes you feel like you are in the shoes of your selected player, rather than feeling like the manager of a team with direct control over a specific player. The camera is low to the field and placed over yourshoulder as to feel a part of the action. It will take some getting us to, but the few huge tackles I laid on my opponent got me pretty excited (as well as the many more and harder hits I took on offense) about the possibilities. 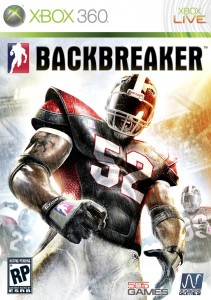 The controls have a lot more depth than I expected. The main movement controls are handled with the left stick, while hits, passing, tackles, and action are handled with the right stick. I expected NaturalMotion to dumb down the controls to make this game more accessible, instead they modified the complex controls from Madden to give it’s own feel without lowering the bar of entry. Switching between players during the action can be a bit unwieldy, and sticking with one player can sometimes make you miss the action. The learning curve on the controls of Backbreaker is going to put off the arcade football fans, but fans of realism that are looking to try something new should embrace it over time, if they can stick with it for that long.

I’m a huge supporter of healthy competition, so I was very frustrated back in 2004 when the NFL decided to go into an exclusive deal with EA Sports as the sole publisher of NFL Licensed videogames (currently lasting until at least 2013). This was a time when the Visual Concepts‘ 2K football franchise was just starting to make a dent in Madden’s football supremacy. Since then, if you wanted an alternative football experience you had to go with the lackluster revitalized Blitz series, the out-of-practice All-Pro Football 2K8, or convince yourself that Europe is right and soccer is the real football. Needless to say, it’s been quiet for non-Madden football fans. We may be grasping at straws here, but Backbreaker is all we have. It is a more than capable football experience that feels distinctly different from the Madden franchise. Will that be enough to earn your dollars, or are licensed sports games the only ones that matter? You can let your voice be heard on June 1 when Backbreaker is released on the PS3 and Xbox 360.