Meanwhile… we’ve actually been playing games. Each week we recap our recent gaming experiences and tell you what we’re looking forward to, so you can use your time more wisely than we have. Those PS3’s of ours finally wake up from hibernation. Funny what free games can do. Everyone else is still stuck in the past or down some deep hole that they dug for themselves. 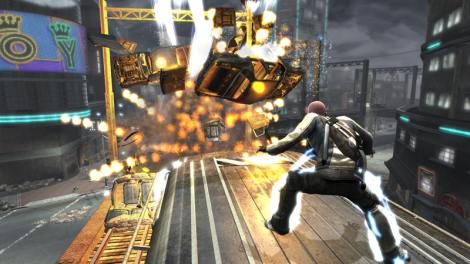 Thanks to the Welcome Back program Sony is offering PlayStation Network subscribers, I’ve finally gotten the chance to play inFamous and I’m having a great time. Cole is a bad ass and I love the ability to roam around the city and just blast fools with lightning. Sure, Zeke is annoying but I don’t mind him that much. It’s the most fun I’ve had on the PlayStation in awhile and I look forward to playing Infamous 2 at some point.

I played a ton of Crysis 2 multiplayer last week and I have yet to get bored with it. In fact I love that it is not Call of Duty. I have yet to run into anyone dropping derogatory remarks and actually had a good session with some one I met in game. Moving up from the beginner multiplayer tier into the normal one was a reality check but even though I’m dying way more often than I’m killing, it is still great. I definitely want to get a group of Horrible Nighters together at some point. 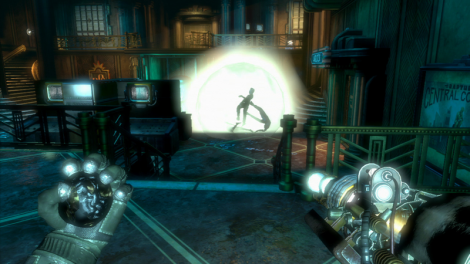 My gaming has been all over the place lately. I finished the Portal 2 single player campaign in a few sittings. That game was great. I loved it even more than the first. I’m really looking forward to working through the co-op campaign with JDevL. I’m hoping we get to that here in the next week or so. I also finally picked up Crysis 2 so I’ve been working my way though the campaign on that one. The game looks great, and so far I’m loving it. I haven’t really touched much of the multiplayer but that’ll be coming soon. After only making it through a few chapters in Crysis I started getting this urge to play some BioShock. It’s mainly due to all the E3 buzz about BioShock Infinite. Luckily, I had picked up the Minerva’s Den DLC for BioShock 2 a while back when it was on sale. I made it all the way through the first section of the map, so I figure I’m either halfway through, or maybe just a third. I’m really not sure how long this storyline lasts, but I’m having a good time with it. I think it’ll be a nice way to put some closure on Rapture before I move on. No matter what some people have said, I think BioShock 2 was a great sequel.

Sony also got a little love this past week. The welcome back package increased my PS3 game library from 1 to 3. I had always meant to pick up LittleBigPlanet, but just never got around to it. I’ll be giving it some decent play time because since my Wii is broken, it’s pretty much the only 2 year old friendly game I have than I can actually play in front of my daughter. She loved it so we’ll be seeing more of that game soon.

I hate to admit I got a second wind for Minecraft here over the past few weeks. I spent a ton of time cleaning up our spawn area and building a tower with an underground lava encased nether portal entry. I also searched for a few hours for a pet wolf only to be quickly saddened when they were both taken out by a mob of angry skeletons. I don’t know what it is about Minecraft, but I guess my childhood love for legos just keeps me going back to that game. I’m not sure what’s going to happen once that releases for Xbox. If it has achievements that could be dangerous. 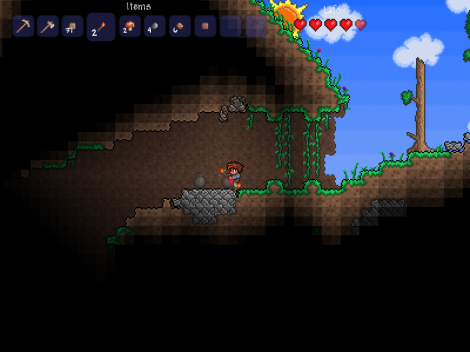 Still chugging along through the Honest Hearts DLC for Fallout: New Vegas and have determined that it is far better than Dead Money. The extra area you get to explore in Zion is huge and there isn’t as much hand holding to make the action drag. I am really expecting to be blown away by the next couple DLCs, but I’m not holding my breath.

I’ve jumped into Terraria a couple more times, but I find myself feeling guilty playing that game while others are on the sidelines. It’s a good game, don’t get me wrong, but without much narrative I am starting miss connecting with a game’s story (a clear weakness in these type of games). As my schedule starts to slow down a bit, I hope to jump into inFamous and Dead Nation, the games from the PS3 Welcome Back package that I chose this past week (after a ten hour download). Dead Nation looks to be a fun but simple zombie shooter while inFamous is one of those games that I missed because of a later PS3 purchase. I love super hero stories that aren’t too over the top, and very few people have had bad things to say about the game, so I’m pretty excited. Lastly, I’ve had a hankering (yes hankering) to play some Section 8: Prejudice but needs some bros and brosephines to join forces with. It’s just not very fun getting yelled at by preteens and sociopaths. 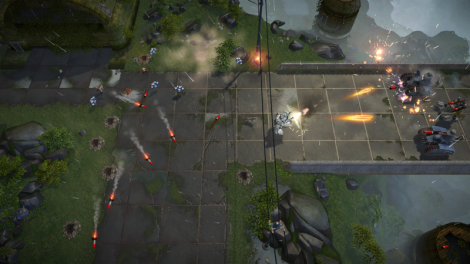 These towers could be better defended

I actually got a lot of gaming in this last weekend – my girlfriend and I did some triathlon training on Saturday, which just happened to be the hottest Indy has been on that date, ever. It also happened to be the second weekend a person who will remain anonymous was a little less than cautious in putting sunscreen on my back…so Sunday, I spent a lot of time exhausted, on the couch. I wrapped up L.A. Noire and…wow. Just wow. If you haven’t played this game yet, you’re seriously missing out. I’m still spending a little time playing it here and there to get 5 star ratings and I still have the DLC case to play. I also cracked into Gatling Gears and Risk Factions. Gatling Gears is a fun, steam-punk, overhead-shooting XBLA game where you get to control a goofy-looking mech. It’s a cute game although the people running around shooting at you are kind of hard to see. Risk Factions is…Risk. I’m still not positive what the best strategy is there, but since I’m playing the computer, I’d probably better sort that out. Or not. It’s not that fun. 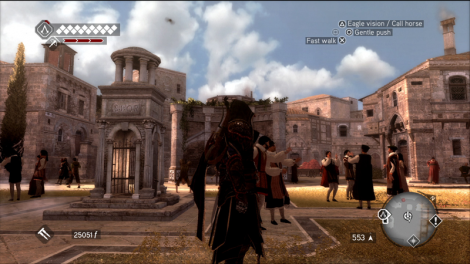 I actually remained strangely focused last week. I went back and completed the remaining achievements in Assassin’s Creed II when I discovered I didn’t have too many feathers left. I felt like I owed it to the franchise to see through one of the games completely, and I knew I wouldn’t be able to do that with the multiplayer achievements in Brotherhood. Speaking of Assassin’s Creed Brotherhood, I played a decent amount of that one, too. The small changes that this series as made with each iteration are not only smart, but they make the basic city traversal/exploration not feel as repetitive with each game. Building up reputations with factions, having mini-assassination missions with the Borgia captain in each area, and restoring merchant locations keeps distracting me from the main story missions, and I’m not complaining one bit.

I’ll be sticking with Brotherhood this week, but I have a feeling I’ll be a bit burnt out on games after E3 coverage so I may get some air before returning. The only game that might distract me is if I happen to find a deal on inFamous 2 or read a review that reminds me how much fun I had with the first game. Otherwise, I hope to hold strong and see through Assassin’s Creed in the coming weeks.