When Resident Evil concluded, the Spencer mansion was in the process of exploding as a lone helicopter made its way back to Raccoon City with the five remaining members of the STARS Teams. While this seems like a rather hearty number of survivors in lieu of the nightmarish conditions of the secret Umbrella research laboratory, the Special Tactics and Rescue Service lost a total of 8 members throughout the course of its mission. While most the survivors would go on to face similar confrontations with Umbrella in the years following the incident, those that lost their lives weren’t honored and were rarely mentioned, despite the sacrifices they made to the success (or lack thereof) seen that horrible July day in 1998. 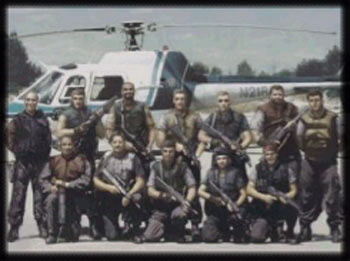 The good ole' days, before people discovered there really are monsters in the closet

While the body of Kevin Dooley was the first apparent KIA of the mission (his hand was the one found in the helicopter wreckage, detached from his body but still hanging onto his gun…like a freaking boss), Joseph Frost’s brutal maiming by zombie dogs was the first that players actually bore witness to. Even though he died rather quickly (a case of eager beaver syndrome at its finest), he was actually one of the main contributors to Alpha team. The canine feast he found himself in the middle of made for the perfect distraction, ensuring that his fellow teammates could escape to the worst retreat destination of all time. Had he not been around, either Barry, Chris, Jill, or Wesker (though that wouldn’t be a huge issue) would have been the introduction kill-of-the-day, thus changing the future of Resident Evil games forever. I imagine that once all was said and done, Alpha Team kind of felt bad for giving Joe a hard time for wearing a d0-rag to work. 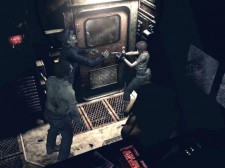 Still less creepy than Tom Hank's version of a conductor

However, before Mr. Frost’s fateful best-in-show even happened, Bravo team was crossing off team members like unwanted guests on a wedding invite list. Edward Dewey survived long enough to warn Rebecca about the monsters aboard the train featured in Resident Evil Zero, but soon after, he decided that being a zombie was much better than bleeding to death from mortal wounds. Without that warning, Rebecca may have naively assumed that the train was a relative of the one featured in The Polar Express, which would have been very disappointing should she have been a fan of the book.

Birds of a feather

It may be an assumption, but I’d like to think that Bravo’s marksman Forest Speyer was able to pick off a few undead assailants before succumbing to the very annoying death pecking of a flock of mutated crows. If not for him, then the halls may have offered a few more dangerous surprises for the remaining crew, a huge issue given how low ammunition supplies happened to be. Like Edward, he became a zombie,too, which is a point against him, but being that he could hardly be held responsible for his corpse being reanimated by a biologically engineered super virus, we’ll give him a mulligan. 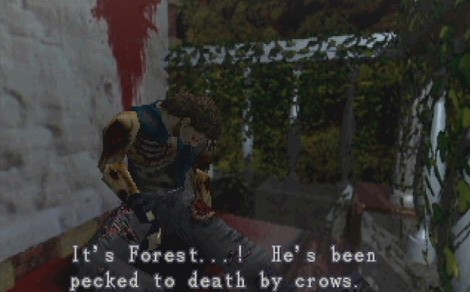 Those crows sure are beaky

Everyone knows that the African American members of any elite fictional combat unit tend to lose their lives early on (I know, I know it’s not right but it’s true, this kind of explains it), so it wasn’t too much of a surprise to find that one of the first bodies discovered during the initial investigation of the mansion was that of chemist Kenneth J. Sullivan. Let’s hope he had a bit of combat training since forcing a chemist to be part of a dangerous mission seems irresponsible at best, but again, the lack of ammo reserves and adequate first aid points a finger at how effective Wesker’s sabotage actually was, so maybe Kenneth’s recruitment was just part of that very intricate stab in the back . Either way, poor K-Sul found himself the unwilling recipient of a zombie hickey. Fortunately, being the best educated of the group as well as the most forward thinking, he decided to grab a few extra 9mm clips and stash them away. He didn’t exactly get to use them, but his Alpha team cohorts celebrated Christmas once they got done pilfering his cargo pants right after his funeral.

Screen time does not equate to remembrance

Richard Aiken and Enrico Marini both lived long enough to have a few lines during the game, and in doing so, instilled a bit of hope that all was not lost since discovering dead team member after dead team member tends to cause morale to dip in even the most battle hardened individual. Had Richard not gone nosing around in the attic, the dynamic duo of Chris and Jill would have run headlong into the snake and been poisoned by that heinous venom. Sure, Barry or Rebecca could have saved them, but the lost time could have impacted the course of events quite dramatically. For fans of the remake (and in my opinion, the true canon of the series) Richard also jumps in front of a shark to protect his buds, thus giving him the award of most eager to endure horrifying injury for the sake of the team.

Enrico was the team leader of Bravo, but never learned to be real concise with his guidance or else the mystery of the STARS traitor would have been revealed much earlier. That being said, he did make it the farthest into the laboratory and was able to at least hint at the fact that there was a double agent in their ranks. It is sad, however, that after all his struggles he was finally killed by a measly shot to the chest. I’m sure the Italian heartthrob on the inside was hoping for something along the lines of a decapitation, but as some guy sang in some popular song, you can’t always get what you want.

Lost but not forgotten

Very few of us had much of a chance to develop any sort of relationship with these characters seeing as their appearances were often their first and last, but the impact of their actions is arguably as important as any character throughout the series. Like the commando team from Predator, this group did not perish because they were weak, quite the contrary. Their passing actually demonstrated the strength of Umbrella’s BOWs, as well as indirectly helping their team to survive and ultimately allowing them to end the reign of the pharmaceutical giant many years later. A tip of the hat and a pour of a pint for you dear brothers, even in death you still did more than that jerkoff, Brad Vickers.

3 Comments → Characters that Games Forgot: The Lost Souls of Teams Bravo and Alpha