I decided to visit the woods a couple weekends ago in hopes of establishing a foothold in the natural world as the urban landscape I called home was beginning to close in on me. I needed to replace the concrete jungle with a real one, breath in the crisp air of the wilderness and start anew. I’d soon find out that starting from scratch is tough, but not impossible thanks to the lessons of Terraria. 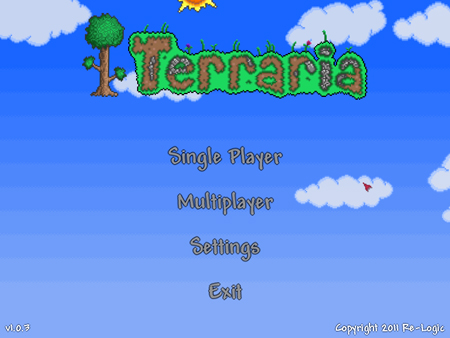 The Lessons of Terraria

I learned something today. When I used to shop for tools, I tried my best to find the greatest deal. What I didn’t realize was there’s a direct correlation between the value of the metal used in the production of said tools and how long digging, chopping, and hammering actually takes. My lowly old iron pick axe was costing me time, I was going to need some bling or else the hole I was digging for use in the establishment of a secret base was going to take forever. Thanks, Terraria.

Everything has a use, even poop

I learned something today. At home, I tend to throw things away without thinking of potential future uses. It’s a different world out in the woods and every item I find counts no matter how useless it may seem. Twigs can be used for kindling, stones for defense and the abundance of dead leaves makes it easy to create a suit and jacket combo that doubles as a ghillie suit. Sure, storing all my feces in a hole may seem gross now, but it’s malleability may prove useful in future crafting projects. Thanks, Terraria. 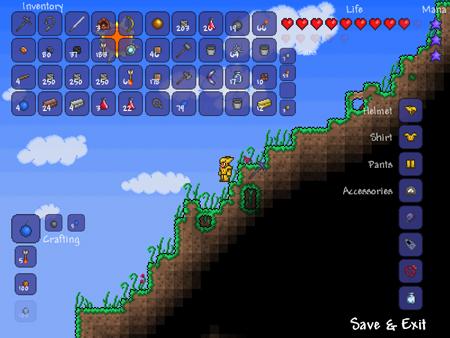 Need some bros, build some houses

I learned something today. I’d been in the woods for quite some time, and loneliness began to set it. Not only did I need to talk to someone, but there were chores piling up around Camp America and I was only one man. Knowing that houses tended to attract people, I decided to build a few extra shelters around my main encampment in hopes that others would be drawn to the off the grid lifestyle I was trying to contend with. Knowing that a house is only a house if it has a door, light source, and a table and chair, I got to work building. Before I knew it, drifters started finding their way to their new abodes and Camp America went from a lonely outpost to a bustling village. Thanks, Terraria.

I learned something today. Many years of city dwelling had made me an outsider of nature’s domain, and nature doesn’t like outsiders. After frequent attacks from a variety of forest creatures, I realized that the last weeks of peace was actually the calm before the storm, and I was either going to leave that land of my own free will or stay forever buried deep beneath a grassy hill. Not being one to give up, I took up my tools and took the fight to the forest creatures. If I can dig a hole in the earth with the greatest of ease, my once passive arsenal could be turned to the dark side and start digging holes in the flesh of my enemies. Thanks, Terraria. 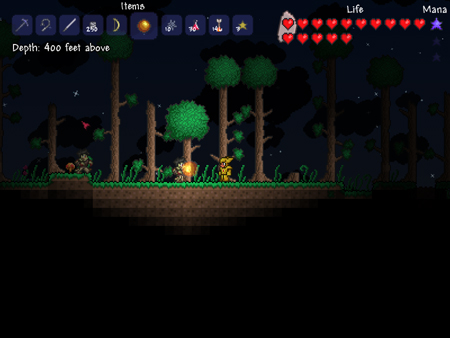 Taking to the land may seem like a way to simplify one’s life, but naivety caused by creature comforts can spell doom for any idealistic forest dweller. Invest in some quality gear, don’t be wasteful and when the natural world decides to bite you, be prepared to bite back. Thanks, video games.