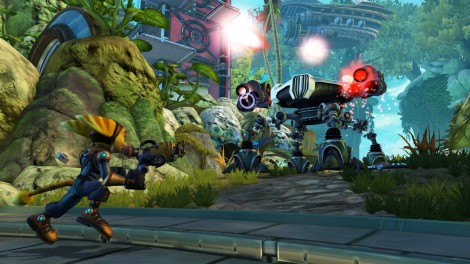 It won't be a Ratchet & Clank game.

Insomniac Games, makers of fine video games like the Ratchet & Clank and Resistance series, will be announcing a new IP at this year’s E3. Previously a producer of games only released on the PlayStation brand of consoles, Insomniac has broken away and will be releasing its next game for multiple consoles. In 2010, Insomniac announced that it was signing a deal with EA Partners which allowed the chance to develop an original IP for the Xbox 360.

It is not yet known what the game or what universe the game will take place in but that will all change later today at E3 The Electronic Arts press conference begins at 3:30 ET on Monday. Place your guesses on what the game could actually be in the comments below. Will it be a 3rd person character platformer, or another in the long line of first person shooters that will surely be featured in Los Angeles this week? Once the game is announced, come back here and let us know if you are excited or disappointed by what the game actually is. I have a feeling it might not live up to the hype, but I want to be disappointed.

The new game is called OverStrike and is a co-op focused spy shooter. Looks to be full of gadgets and damn entertaining.