Based on my preferred genres, I tend to be full of piss and vinegar after a play session, my heart still beating quickly after an intensely violent fire fight with monsters, terrorists or whoever else happens to be my adversary at that given time. That’s why it’s a relief  to find a game like The Tiny Big Bang Story, a title that’s a bit off the beaten path and full of good vibes, soothing tunes and puzzles that sit at the perfect level of difficulty.

When the game first begins, you witness a meteor crash into the unnamed world where the story takes place, a catastrophe that could have been averted had the astro-mining team of Affleck and Willis been around.  Fortunately, instead of ending the tiny little world, the explosion just causes the planet to erupt into puzzle pieces, taking the event from apocalyptic level to a slight inconvenience. Your goal is to locate the missing pieces, solve a few puzzles and ultimately, rebuild the world. 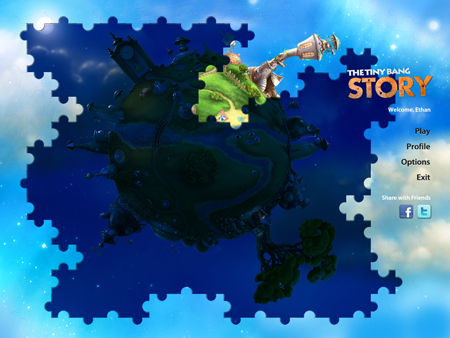 This really could have been much worse 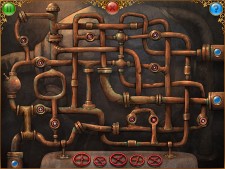 Pipe puzzles are the bane of my existence, I'd be a horrible 19th century plumber

The Tiny Big Bang Story is the result of a sexy encounter between the I-Spy Books I loved as a child and the point-and-click adventure games that got me through my awkward preteen years (I do understand that it’s a bit creepy that my underage memories are making love in this description). Each level consists of identifying the need for objects such as cogs in a machine or light bulbs in an array and then searching the area for said items. Once the necessary number of items is located, you’re then tasked with dealing with one of many varied puzzles types. The puzzles themselves aren’t anything that hasn’t been done before, but are still challenging and fun enough to make progression through each level rewarding.

Because of the necessity to scan levels thoroughly for items, it’s tough not to recognize the incredible level of detail each has to offer. Even being static images for the most part, the hand drawn art is always interesting to gaze at and unique enough to make it difficult to classify it alongside other styles (though its closest relative style is probably steam punk meets the Genesis Land of Confusion music video). I’ve played all kinds of different games in my time, but never before have I wanted to exist in a world like I did with The Tiny Big Bang Story. There’s just something completely serene about the locations you explore, a welcome change of pace from the anxiety other games create with their life and death struggles.

I need a prescription for this

When I start fixating on art design, you know the game has something special but when my attention turns to the music, I’m either drugged or there’s magic involved. The soundtrack of The Tiny Big Bang Story is one of the most pleasing groups of tunes I’ve ever laid ears on. There is genius behind both the creation and the mechanics of the music choices. Because the game requires a brain that acts like a fine toothed comb, extraneous distraction to the senses must be eliminated, and that is precisly what the music accomplishes. I literally have ADHD, yet was able to sit still and focus on the game long after my medication had already worn off. Other games keep me hooked with action, this game kept me hooked by offering me peace at every turn. The next time you have some bad news to tell your significant other (such as spilling marinara sauce on the expensive white couch) put on the TBBS soundtrack and I bet the situation becomes exponentially softer.

Too little of a good thing?

I’d love to finish this review off by continuing to praise the game, but there are a few issues that need pointing out. First, it’s a disappointingly short game (took me around 3 hours) with very little replay value. Because it was only $9.99 on Steam and had beneficial residual effects (hyperactive me was calm for hours), I never felt as if I overpaid, but would have loved more time to further explore the world I had been so entranced with. 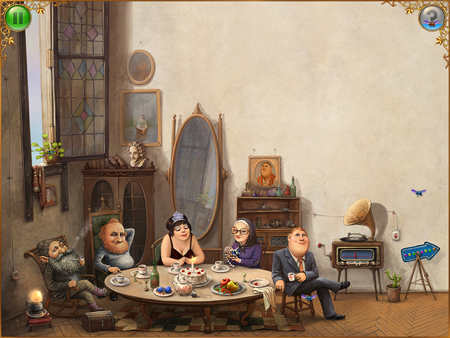 The game's cast is relatively indifferent to your presence.

This is also a game that many players will get bored with mainly because the gameplay is not exactly varied, nor is it exciting in the conventional sense of the word. Feelings of accomplishment come from finding a hard to locate item or solving a tough puzzle and not from defeating a towering boss or leveling up. The comparison could be made to a foreign art film with most gamers prefering the summer blockbuster, The Tiny Big Bang Story inherently suffers from a smaller demographic. That being said, I tend to exist in the world of meatheads and TBBS had something for me, so it’s worth a try even if you prefer brawn over brain.

The Tiny Big Bang Story’s value comes not from its size but from the heart at its core. I am not sure whether Colibiri Games has plans to release further iterations of the series, but I’d personally like to see them create a point-and-click adventure game along the lines of a King’s Quest (I like I-Spy, but  have to admit that it loses its appeal after a while). At the end of the day, some games are merely played and some are remembered for a long time after and I’m not going to forget The Tiny Big Bang Story.