With all of the time I spent with the developer Splash Damage’s two Enemy Territory games, Wolfenstein and Quake Wars (and the exemplary job it did refining and improving on the formula between the two games), Brink‘s lineage was obvious enough to get me excited to see what the next iteration would have in store. Like its predecessors, Brink is an FPS, focusing on objective- and class-based multiplayer. Think Team Fortress 2 or the Battlefield series and you’re on the right track. The game claims to seamlessly integrate a single player storyline into co-operative and competitive multiplayer gameplay on a series of maps following a narrative…but never totally delivers.

When global climate change raises the Earth’s oceans to dangerous levels, a large, experimental, floating utopian city, known as The Ark, becomes a safe haven for fleeing refugees. Practically overnight, the Ark’s population goes from five thousand to fifty thousand and its resources are strained. The overcrowded refugee population believes that the people in power are withholding precious real estate and supplies, but the Ark’s security forces see it differently. Tensions increase and eventually fighting breaks out between the citizens and the security forces – the basis for the game’s conflict. 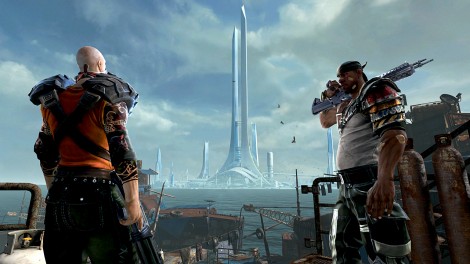 I hear the rent is cheap

After the opening cutscene, you must choose to side with either the Resistance or Security. Your choice doesn’t limit you from seeing any content, though, since you can choose to play any mission from either viewpoint at any time. Once you pick your side, you can customize your character’s appearance. While you need to unlock most of the options via leveling up, the early options are varied and do a respectable job of showing off the game’s unique and detailed art style. The variation in clothing, hair and gear ensures that you won’t run into your twin on the battlefield. On top of character customization, Brink features some impressive gun-porn, letting you customize your weapons with various unlockable attachments like silencers, extended magazines and red-dot sights. There are enough assault rifles, SMGs and pistols here to make Neo jealous, although you’ll struggle early on to determine what the benefits of each one are due to their vague stat bars.

Each of Brink’s four character classes has its own special abilities such as deployable turrets and landmines for the Engineer or disguise kits and EMP grenades for the Operative. As you gain experience, you can purchase upgrades that beef up these abilities and unlock some new ones. Some abilities are more useful than others while some are only really useful once upgraded. The ability to reload while sprinting was a useful unlock, as was an upgraded engineer turret, which dealt more damage and seemed to take more punishment.

Perhaps as a side effect of the deep visual character customization, it’s very hard to distinguish one class from another in battle. Since any body type can play as any class (and weapon selection is tied to body type), the only way to determine an enemy’s class is by placing your crosshair directly on him or observing his behavior, which makes it kinda’ hard to prioritize targets in the heat of battle.

Before you play for the first time, the game offers you a bribe of one thousand experience points to watch an introductory video explaining the core gameplay concepts. The video is informative, but it’s hardly a replacement for an actual tutorial. How worried was Splash Damage that people wouldn’t understand how to play its game if it felt it necessary to bribe them? On top of this early quirk, there’s a jab taken at console players: they’re informed that the video was made for them…although that PC gamers might find something useful as well. Really, guys? In my experience, there are just as many PC gamers that have no idea how to follow instructions as there are on the consoles.

Despite what the instructional video might make you think, the game actually has a set of real tutorials disguised as the Challenge mode – 4 different sets of levels that teach you the basics: the four character classes, different map objectives, and the SMART system (read: parkour elements). Completing these levels also nets you some vital weapon unlocks that you wouldn’t get otherwise, so it’s confusing why Splash Damage didn’t just call it “Tutorial” and make it just as unskippable as the opening splash screens. 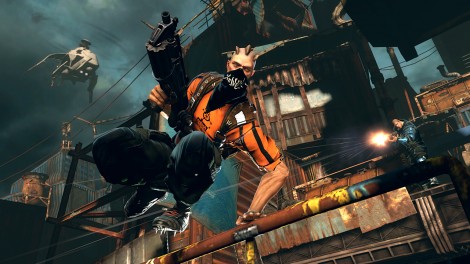 I may have been born at night…

Although Brink would like you to think that the Campaign and Freeplay modes that make up the meat of the game are more than just “multiplayer” and “multiplayer with bots”, don’t be fooled. That’s exactly what they are.

The Campaign mode consists of eight narrative-driven levels per faction, playable either solo or with up to seven friends, with the AI filling out any open slots. Despite its supposed integration of a co-op/multiplayer game with one driven by a strong narrative, the story elements are very light: a brief audio voice over during the loading screen, a short cutscene before the level begins, an occasional three-second clip after an objective is completed and another brief cutscene of the winning team at level’s end. If you were expecting a full-fledged story mode found in almost every other shooter, you will be sorely disappointed. The only reason to spend any time at all in the Campaign mode is to avoid the increase in difficulty that will naturally come with playing against real people. And avoid that difficulty you will, since the AI ranges from “moronic” to “not great.”

The Freeplay mode is exactly the same game as the Campaign, except the opposing team consists of actual humans. You get the same light story elements, play on the same maps and compete for the same objectives. If you decide to brave the Freeplay mode, you’ll discover something that more closely resembles the Enemy Territory games of the past, but with some new twists.

Each of the eight maps has an end goal that progresses the “story” from one perspective or the other, but the heart of the action lies in the battles for the numerous objectives en route to that final push. As you (or the enemy team) complete the various level objectives such as planting explosives on an access door or hacking a computer console, new ones will open up, moving the action to new areas. Each class has different mini-missions available to break off and do and reward you with bonus experience points. These missions are dynamic and change as the level progresses; as an engineer, you might have to build a gun emplacement to suppress a bottleneck, but then fall back to guard a key point as the enemy pushes forward. If you play as a medic, you will see when teammates are incapacitated and can go revive them, which can change the course of a battle. 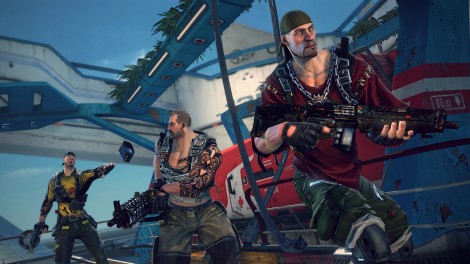 With so many objectives and sub-objectives to attempt, you’re can easily find yourself alone and vulnerable if you don’t coordinate your backup. Brink tries to encourage actual cooperation through escort missions for teammates that have a major objective selected, but again, falls short. More often that not, my teammates were too concerned with jumping headlong into battle to bother providing me backup; while it might be fun for a bit, it doesn’t help the team and that’s what Brink‘s about.

On top of the lone-wolf tendencies of my teammates, sparse communication was a problem as well. Even with the built in VOIP functionality, I never received a response. Falling back to typing my messages, my pleas for help still often fell on deaf ears. This isn’t a design flaw, but without coordinated efforts, many rounds ended in defeat to a more organized team.

The SMART system (Smart Movement Across Random Terrain) adds unique traversal option while moving around the levels, allowing you to vault right over short walls and boxes, grab ledges and perform a running slide. With your SMART proficiency tied to your character’s body type, the system feels very natural and only requires you to hold down sprint, jump, or a combination of the two to perform most of the moves.  You’ll find yourself using that running slide often as it provides a quick way to get into cover and knocks down any enemies in your path. Although you can perform some slick wall jumps in the middle of combat that can really throw off the enemy with a “Light” body, the game’s eight maps don’t seem to offer that many opportunities to explore the system’s full potential and you’ll soon forget about the more interesting techniques learned in the parkour challenge levels.

The gunplay can either be very satisfying or extremely frustrating, depending on which guns and attachments you use and the situation you try to use them in. With the frantic pace of combat, the player with the right weapon load and perk unlocks will often win out, even over a player with better aim.  I couldn’t help but notice that this seems like a deliberate and somewhat odd design choice, since it seems to be contradicted by some of the equipment options and map layouts. The SMGs are the safe choice with their excellent firing rate, reasonable damage and surprisingly good accuracy at range. A couple of the assault rifles can be very versatile with the right attachments, but on average, are only useful in rare long-range engagements and with steady aim and controlled bursts. The majority of firefights will take place from short to medium range, so SMGs usually reign supreme. Shotguns and pistols act like they should and heavy body types can use heavy machine guns good for supplying suppressive fire. Unfortunately,those machine gun emplacements are nearly useless with their large cone of fire and paltry damage. Prefer to sit back with your long gun and dish out headshots? Too bad. One of Brink‘s  fast moving SMG wielders can nullify snipers at almost any range and Engineers’ turrets suffer a similar fate, as their firing arc and damage output are limited and are easily dispatched with a standard grenade. 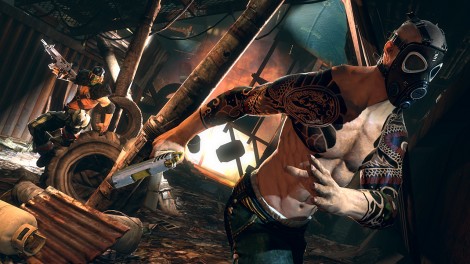 Didn't I see you in Borderlands?

I’m not mad at you, just disapppointed

So many of the game’s features seem reliant on its players understanding the way the developers meant for the game to be played. Even if you’re successful in deciphering this formula, you will still find that some play styles are just more useful than others in a game full of adaptive, thinking humans. Many of the habits learned in combat versus AI in the Challenge and Campaign modes will just get you killed against live opponents, limiting those modes’ utility. Once you become acclimated to the online experience, you’ll quickly discover that despite the proliferation of weapons, skills and equipment many of them just aren’t worth using.

If you were to jump into one of the game modes with seven friends, all with microphones and playing with some modicum of teamwork, you might just find a compelling experience that keeps drawing you back night after night. Or maybe you’ll get lucky and discover a dedicated server with a crowd of regulars that thrives on communication and team play and bans the unsavory fellows that think they’re playing Team Deathmatch.

Brink isn’t a bad game. In fact, it’s full of good ideas and interesting gameplay hooks that both hearken back to its roots and iterate in exciting ways. Unfortunately, the way it all comes together is uninspiring and ultimately makes the net experience not very compelling. It requires that the stars have to line up juuuust right to make an enjoyable experience and begs the question: Why choose Brink when so many other, more consistently fun online action games are available?

This article was submitted to us by Josh Lee and promoted by a member of The Cursed. If you’d like to submit your own article, please Contact Us.

6 Comments → Brink Review: On the Verge of Fun