Released on August 14, 1989, the Sega Genesis was the first real competitor to Nintendo’s dominance on the home console market. But seeing how Justin L and I were die hard Nintendo fanboys, we didn’t get the chance to play many of the games released on the Genesis. Luckily, the Fine Brothers are there to help us catch up on the storylines we missed out on while we were drinking the Nintendo Kool-Aid. Even though it’s only 3 minutes long, you can get a good grasp on what those “heavy storylines” in the Sonic games were all about. 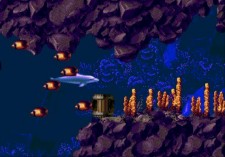 Now we can find out what happens at the end of Ecco: The Tides of Time.

This isn’t the first video the Fine Brothers have produced in their spoiler series. They’ve also do one on Nintendo games, so Sega owners like Justin G can catch up on all the great games they missed out on. Now, I’m just reminded of how many games I never got around to playing. There’s a laundry list of games we haven’t finished that we need to disclose.