There was a time in my life where I stepped into the squared circle and became a professional wrestler. I was a huge fan of the sport but didn’t really know what I was doing. I had no formal training but ended up with the victory anyways. If I had started out playing Pro Wrestling, I might have stood a shot at making it a career. It’s a shame I never quite made it into the other famous ring: the boxing ring. I could have been a contender.  I could have been world champion thanks to the lessons I learned from Mike Tyson’s Punch-Out!!. 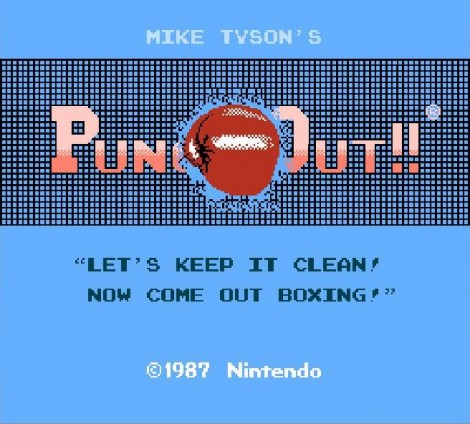 Dodge and weave, even at the title screen.

The Lessons of Mike Tyson’s Punch-Out!! 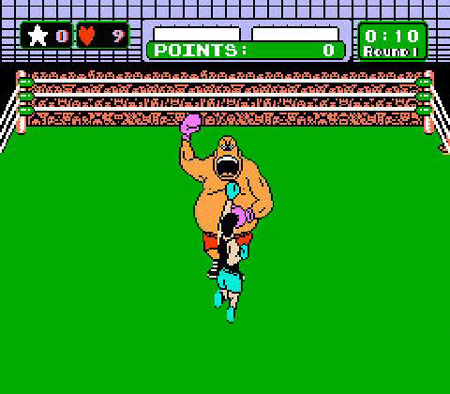 Even opening your mouth is a pattern.

I learned something today. Patterns are everywhere. They’re in your clothes, on your old Windows 95 desktop wallpapers, and even in your boxing matches. And they can be used to your advantage. If you ever find yourself in the middle of a ring with no way out, look for a particular head nod or glowing jewel on the top of a turban to point you in the right direction. Look, boxers aren’t smart. They make a career out of getting punched in the head. You’re just starting out so right away you are going to be smarter than most of your opponents. Look for their tells and learn to abuse them for their shortcomings. I’m telling you this so you can become a somebody and not remain a nobody like me. Thanks, Mike Tyson’s Punch-Out!!. 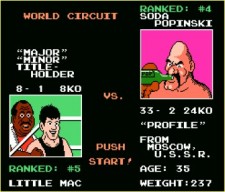 I learned something today. We live in a world that is becoming more and more politically correct. Certain terms and language that has been used for years is no longer the “correct terminology.” We all know that Russians like to drink vodka and what better way to dull the pain of getting punched in the face than to constantly down bottles of the liquid fire before a match. But forcing a boxer to change his name just because he’s representing who he is as a person is wrong. Calling someone Soda Popinski is derogatory and demeaning to the nth degree. What if he doesn’t even like Soda Pop? As a regulatory body, the World Circuit should know that soda is all empty calories. You want to portray your boxers as unhealthy, dehydrated losers go ahead. I know your true name Vodka Drunkenski and I won’t let it die. Thanks, Mike Tyson’s Punch-Out!!. 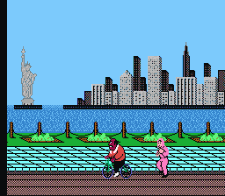 It really stands out against that blue sidewalk.

I learned something today. Don’t laugh if you happen to drive by and see me in a pink tracksuit running behind an overweight African American man on a bicycle. I’m in training. You might ask yourself, “Why is he wearing a pink tracksuit? He could wear any color he wanted.” I’m here to tell you that I can’t just wear any color. Obviously I can’t wear red or Doc and I would clash. Look, if I’m going to be running on the streets of New York City, I have to stand out. There is a lot of traffic and I want those crazy taxi drivers to be able to see me. I don’t see any of you training to get in the ring, so get off my case. I’m a man. I wear pink. Thanks, Mike Tyson’s Punch-Out!!.

Health can be regenerated

I learned something today. In every sport there is an opportunity for rest. In basketball your coach could put you on the bench for a breather. In baseball, when your team is at bat you get to sit in the dugout and grab a handful of sunflower seeds. But none of those sports allow you to heal. Sure you get to catch your breath, grab a drink or in the case of baseball, get your fix of nicotine. However, in that minute between rounds of a boxing match you can regenerate some of that health you lost. Be careful though. You’ll only have one chance per match to pull it off. I’m not going to tell you how to do it. Just know that it can be done. If timed correctly, you can go on to become a champ. Be forewarned, your opponent might know the same trick. Thanks, Mike Tyson’s Punch-Out!!. 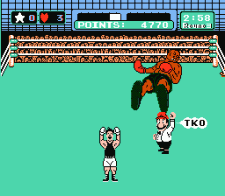 One of the most satisfying game endings ever.

I never made it as a boxer because I never stepped foot in an actual boxing ring. That doesn’t mean I didn’t train against some of the best men in the sport. I still learned what it took to become a champ. The little tricks of the trade if you will. If you want to become a boxer, you would do well to take my advice. And soon you might hear these words “Kid, you look like you’re ready to take on the world.” Thanks, video games.