There are a ton of games out there that could easily be made into palatable movies, but I wanted to start big while at the same time resurrecting a franchise that essentially shaped my adolescent life, so I went with Altered Beast. Why Altered Beast, you may ask? Well, before I punch you in the teeth for asking such a stupid question (and despite what your teacher told you in fourth grade, there are such things as stupid questions) let me pose a question to you: Are you a pussy? 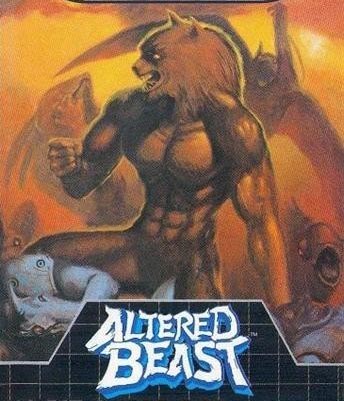 Altered Beast would be the perfect game to bring to the silver screen for a variety of reasons. Not only does it involve punching and jump kicking (America’s favorite past times next to baseball and BBQ wings), it also features shape-shifting strong-men with a penchant for revenge and a slathering of Greek Mythology to top it all off.  I literally began and finished puberty after a single session with this game (my testosterone levels were so high that I failed a drug test the following day after a little league game that saw me sling 5 long balls over the left field fence). I’m pretty sure the reason we haven’t seen another episode of the Altered Beast series this generation is because most developers are afraid to screw it up and get on the bad sides of gamers like myself (their fears are warranted, Altered Beast fans lost all ability to show appropriate and humane expressions of disappointment after Altered Beast: Guardians of the Realm).

The beauty of Altered Beast comes in what most would consider its ultimate weakness: it’s simplistic plot. For those not in the know, the game follows the exploits of a centurion resurrected by Zeus, tasked to save the god’s kidnapped daughter, Athena, from an evil demon lord named Neff.  In order to accomplish this feat, the unnamed centurion spits in Mother Nature’s face and defies all her laws by transforming into different beastmen and smashing the skulls of Neff’s legion of undead goons. The game is literally 90% action, 8% options menu and 2% plot, which gives me ample room for expansion. I don’t want to get too far off the goal that Altered Beast set for itself, but a bit of story here and there wouldn’t hurt anything. For instance, the centurion needs a backstory and a reason why Zeus showed interest in him in the first place.

A main character with character

The beginning of the film will flesh this out by starting off with the centurion fighting in a gladiator match to the death with a bunch of thugs and animals. For some reason, the animals determine that the centurion is their friend and help him fight off the thugs. As the battle ends, the centurion looks to his emperor in hopes of his freedom, only to be executed by a bowman off screen. The animals are totally ticked off by this scenario and fight back and are themselves killed by the same douche. The scene will fade away to show the centurion, plus his animal friends, lying dead in a circle with anger still painted across their still faces. (Take notice of the beastman connection subtly illustrated here. That’s called foreshadowing, bros and brosephines).  Most game-to-movie conversions try too hard to either recreate the game’s story from scratch (Resident Evil) or stick to ridiculous game plots that needed some help in the first place (House of the Dead). People will flock to see Altered Beast for action, adventure and manimal shenanigans, but a bit more depth couldn’t hurt.

What I believe the rest of the movie would amount to is a combination of Troy, The Lord of the Rings and Rambo. For a moment, I believed switching the setting to modern day could be appealing, but that would limit the set-piece battles and finding contemporary roles for the main characters could turn corny really fast.  People love swords and spears, anyway, so throwing in an enraged werewolf will only make things better.

Money is no object with a cast like this

I don’t tend to get caught up in the casting of my hypothetical movies, but in order for the mainstream public to be remotely interested in this film, I need some headliners (just have to get them in the door, the face melting potential of this film is universal and the word of mouth/positive critical reception will spread like that crazy virus in the movie Outbreak). 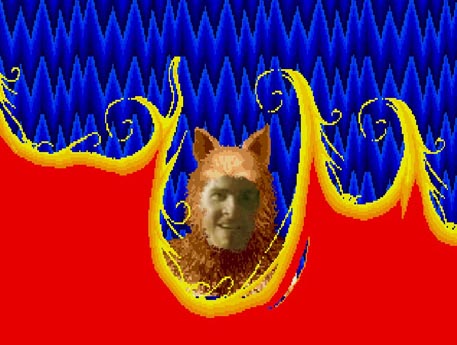 Power U...why are you standing off frame, you're blowing my concentration!!!!!!!

Christian Bale as the Centurion – I’m a Bale fan because he’s a versatile actor, not only based on the different characters he plays but also in his ability to manipulate his body. He looked like he was on Death’s door in The Machinist, then bulked up to a solid wall of muscle for his role in Batman Begins. Because the game featured 4 stages of centurion transformation (wimpy guy, pretty ripped guy, beefcake and beastman) I need an actor that can put varying degrees of weight on his frame in a short period of time (the less CG the better). Bale is also a pretty intense guy, which is needed in the screaming, flame-filled transformation scenes that will occur every time he takes his last dose of awesome sauce and flips the man/animal hybrid switch.

Liam Neeson as Zeus – Despite the movie’s suckage, Neeson played a legitimate Zeus in the remake of Clash of the Titans, so why not strike while the iron is hot? I’d definitely stear clear of the shiny armored direction the Clash of the Titans guys took and feature a Zeus that was half Qui-Gon Jinn and half Bryan Mills from the movie Taken, because in my movie, Zeus isn’t going to take a back seat and let the centurion do all the demon punching. I imagine a pivotal scene in the movie where the forces of evil are beginning to be too much for our hero and Zeus looks at the camera, ties his flowing mane into a trucker pony tail and states through gritted teeth, “Not on my watch!”. 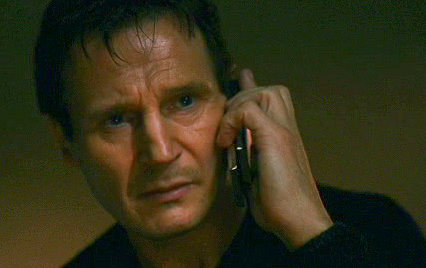 I know that you have my daughter and I want you to know that I have a certain set of skills... I'm also a god

John Malkovich as Neff – Neff isn’t the type of bad-guy boss that lacks personality, so to adequately cast a screeching, yet charismatic demon lord, you need an equally charismatic actor…and John Malkovich is just the man for the job. While I’d suggest to him a Cyrus “The Virus” type approach to Neff, an actor of his pedigree is prone to free-balling his scenes, and who am I to argue? Also, Malkovich tends to sport a bald head, so the costumer doesn’t have to do much more than give him a purple robe and paint his skin white.

Any chick with solid rack and pooper as Athena – I am not trying to be sexist or immature with this statement, but the game features Zeus’s daughter Athena in passing and the money saved from opting out of a big Hollywood name could be put into a more realistic transformation process or a full soundtrack by ManoWar (not to mention that the previous three will probably equate to half the budget). Either way, acting chops are not a prerequestite for this role, but the ability to induce boners is.

PETA may be an issue

There are always unseen obstacles in the development of any type of entertainment medium, and I believe that the thorn in my side during this process will be PETA (People for the Ethical Treatment of Animals). It’s going to take a lot of trial and error to genetically modify the animal/human hybrids for the beastman fighting scenes and I’m not the type to deny that a couple animals may not make it through the process intact. You think a masterpiece like this is going to be risked on furry costumes or computer generated Shreks? Hell no! I want authenticity and that comes from taking science to a level that makes steam shoot from pipes and computer screens blink “CAUTION.”  PETA has connections (especially with a whole city full of bored celebrities lusting after a cause) so as part of a predetermined agreement with them, I’ll agree to release all beastmen into the wild once filming is complete (unless, of course, there’s a sequal in the mix). 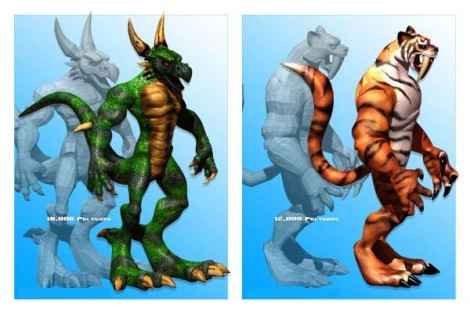 I’m not exactly a screenwriter, but I’ve tried out for enough school plays to have a basic understanding of the structure. If I am going to get anybody jacked up for funding this little project, I’m going to need a highlight scene that flies off the table and smacks them in the face. Obviously, I won’t option this script to anyone whose bench max is less than 250, but even they need more than just the promise of were-animals battling zombies and other creatures in order  to validate digging into their wallets.  Without further adieu, here is a pivotal scene from The Altered Beast Movie for your enjoyment:

The centurion stands on top of a mountain, hordes of monsters slowing climbing up after him. He’s in beefcake mode at this point, but is unable to find the final power ob to finish his transformation.  Lighting strike behind him as a storm slowly picks up intensity. The camera zooms in on his face, an expression of weary desperation beginning to settle.

He turns towards the oncoming monsters, fists clenched and ready for action. The music slows to a melancholy violin and the slow motion begins as the monsters close in for what looks to be the end of our hero. Suddenly, lighting strikes the ground in front of him, setting a group of monsters on fire. A ring of electricity surrounds the centurion as the previously on-fire monsters explode, showering their brethren with charred bits. A slow drum begins banging, followed by the shrill sound of a badass electric guitar solo. Zeus appears behind the centurion and puts a hand on his shoulder.

ZEUS
You forgot this bro

Zeus hands him the last orb, and the transformation begins as the heavy metal soundtrack goes full bore. The screen is obstructed by smoke, and the monsters are confused but still pretty confident in their ability to kill the centurion. Slowly, a figure walks from the smoke, and the camera pans from the ground up to introduce the centurion in his most crazy awesome form; the half were-sabre-tooth tiger / half were-polar bear.

CENTURION
Oops, looks like the cat is out of the bag…I hope you can bear with this sudden change in plans (it won’t be said aloud, but the double pun is intended)

At this point, the centurion just goes wacko on the monsters and starts throwing boulders and shooting heat waves, really making a mess of his opponents. A shot of Zeus follows, an expression on his face like “Whoa, this guy is hella intense!” (note to digital guys: I’m not really into describing every moment, just make the fighting awesome, but avoid the scene looking like a bunch of muppets wrestling. That would kill the momentum).