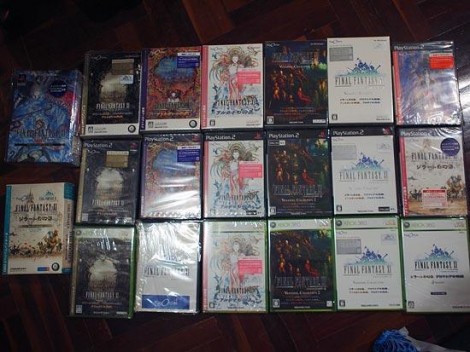 You only have until June 5th to bid on this ridiculous collection.

Even though I consider myself a fan of the Final Fantasy series, there are always going to be bigger fans out there. Case in point, undkodlor is selling his entire Final Fantasy collection on eBay for the low low price of around $15,000. If you think that’s an awfully high price for a series that only has 12, ahem 14…no eleveny billion games in the series. This dude has gone a little overboard in his fandom and collection of all things Final Fantasy. The guy even has the MSX version of Final Fantasy and I don’t even know what a MSX is. He even has all the limited edition consoles to choose from. Even the GameCube branded with Final Fantasy: Crystal Chronicles.

There are only two reasons why he is now selling, what is assuredly his most prized collection:

I’m sure there are other reasons out there, but it’s probably one of the two I mentioned above. As much as I like Final Fantasy, this is a collection that I just can’t afford. Plus my wife would never allow it. I guess his two reasons for selling are the same two reasons I have for not buying. Good luck undkodlor with your auction and in passing on the torch for being the craziest Final Fantasy fan we’ve ever heard of.