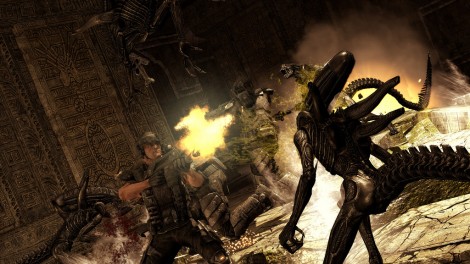 The Australian ratings board has given an “M for Mature” rating to a game called Aliens Infestation that is being produced by Sega and developed by WayForward Technologies. A platform for the game was not mentioned, but seeing as WayForward is mostly into handhelds, one can assume that will be the direction such a game will go in.

Sega’s history with the Alien’s franchise is rocky at best, and WayForward made the movie to game adaptation for Despicable Me as well as a game called Barbie and the Three Musketeers, not exactly a sci-fi horror pedigree, so we have two groups that can’t possible do Aliens justice.

As a fan of Aliens as well as the preservation of all things awesome, I feel the need to begin a crusade to save the Xenomorphs from demise at the hands of those that wish to use their powers for evil and profit (check out some Aliens novels, namely Aliens: Genocide and you’ll see a parralel beginning to form here folks). Like my fistfight challenge to the hackers disrupting Sony, I am stepping up to take the reigns of the next Aliens video game as executive producer (whatever that means). I’ll work cheap, I’ll work hard, and by the end of 2012 we’ll have a game that will make Sigourney Weaver, Michael Biehn, and Ridley Scott place me upon their shoulders and parade me throughout the dimly lit halls of the Nostromo.