Real-time strategy games have never been my cup of tea. I’ve never played any of the Heroes of Might and Magic series. I’ve never played Civilization. And I’ve only played Warcraft III a handful of times. How then do we get to today, where I’m the leader of a quickly-growing alliance in the game Lord Of Ultima, commanding almost twenty-five people at last count, only one of whom I actually know in real life, and all in less than a month? 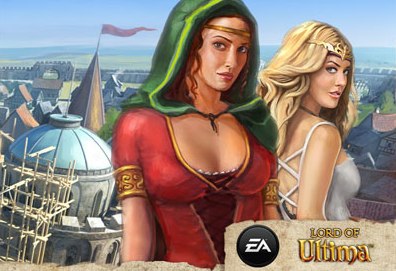 These women in the game? Not a chance!

Let’s Back it Up

Ok, first let’s get into how I found this game, and my initial experience with it. Recently, I decided I was going to check out Chrome’s web store and see if there were any new, interesting games worth trying out. Right on the front page there was a featured game emblazoned with the EA logo, and a rather busty pair of women next to a castle or something like that. This was genius on EA’s part, especially since you see NO people in the game… just buildings. The game was called Lord of Ultima, and the description mentioned two reasons for me to give the game a shot. It’s free, and it’s browser based. I’m all for those two traits in a game and I decided to dive in. The game had a fantastic string of in-game beginner tutorials to help me get used to the controls, my goals, and my motivation. I was having a blast, and after seeing lots of people chatting about alliances (required to “win” the game), I decided to form my own for us here at Horrible Night.

Learning From the Best

Soon after I created our alliance, The Horrible Nights, I did what anyone in this age does to try and recruit people for a cause, I plastered the link all over Twitter and Facebook. Eventually it turned out one of my friends was already playing LoU, and even on my server. He joined up and showed me the ropes of making the most out of the game. There were external tools, Chrome extensions, and all kinds of tips and tricks to making the game more straightforward, simple, and easy to use. After I really felt like I knew what I was doing, it was time to take over the world. 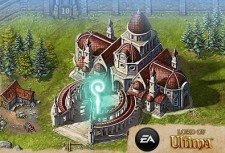 I knew if I was going to do well in this game, I was going to need more than just one friend. I started trolling the in-game chat, as well as the area around my city, looking for potential candidates. I found a few great players, and a few great players found me and wanted to join up. We started to organize, help each other with the game, coined the term Horrible Strategery, and began laying the foundations for what would be our grand scheme to rule the lands of Caledonia. This was a really cool time because frankly, I’m a single player junkie. I don’t normally play games online, and when I do it’s only with friends and family. This was going to take it up a notch. The word on the street is that one “round” of this game, the time it takes for an alliance to win on a server, is about a year. That’s a lot of time to game with a group of people, especially for a game with little story (my gaming lifeblood), but I somehow couldn’t put it down. 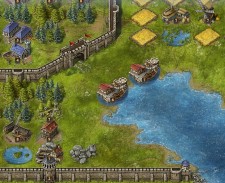 This be the city of Alchemia!

Now we fast-forward about three and a half weeks. Our alliance membership has swelled to about 25 members, I’ve gotten the hang of improving my own cities, as well as giving advice to our little nooblets (great term from a player there), and things are going great. Now this is where the game shines. While a good game is fun to play, a great game gets out of the way, and lets you be immersed. The tools Lord of Ultima provides are just awesome. As you progress to higher levels this game requires extensive amounts of teamwork to get anything done, but it provides you with exactly what you need to do the work. It gives you the ability to assign different alliance members leadership roles with custom permissions. LoU has great built-in forums and chat just for your alliance (also with permissions) alongside all of your other game controls. I can’t compare these tools to those in other games, but what I hear from our members who’ve played similar games like Evony, is that this game is deeper, more thought out, and just more fun than any others on the market.

All I know is that this game was able to get someone like me, who normally only plays single-player storylined games, completely hooked for the long term. Lord of Ultima has the ability to morph into what you want it to be. Early on it’s slow paced enough that you don’t get overwhelmed, and you can stop and enjoy the scenery of your first town. Then, when you’re ready to take it up a notch, it opens up and lets you go all out, creating cities, destroying other players, fighting giant multi-headed Hydras, and even defeating pirate galleons in the sea.

I’m looking forward to making more friends, conquering foes, and uniting the lands of Caledonia! Please join us on Lord Of Ultima World 28!