During the Game Developers’ Conference, studio head of Silicon Knights, Dennis Dyack spent some time talking about the 2008 XBox 360 release Too Human and Silicon Knights’ plan to complete the trilogy. If you’re curious about the pre-launch fanfare, development cycle, all of the brouhaha surrounding its release and Dyack’s sometimes-contentious relationship with his consumer base, try a Google search. What we’re interested in today is whether the series is fixable and, if it is, what needs to be done to fix it.

If you’re not familiar with the game at all, here’s the CliffsNotes: In the distant future (or maybe the ancient past), humanity has been besieged by their own robotic AI creations. Only their “gods,” the Aesir, with their cybernetic enhancements can defend them. It’s loosely based on the Norse polytheistic pantheon and associated legends. You play as Baldur, the “god” with the least cybernetic enhancement and a conflicted soul.  Bad (as in, worse than normal) things are afoot and it’s up to you and your brethren to figure out what’s going on while killing a lot of robots with swords, machine guns and lasers.

I was one of those people who was really excited about Too Human before it was launched, pre-ordered it and spent a lot of time playing it, my disappointment growing with every hour I spent with it…which probably has something to do with why I take a lot of Dyack’s statements with a grain of salt. With that disclosure out of the way, let’s move on. 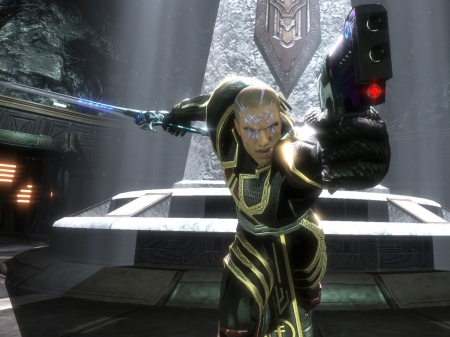 By "too human," I assume you meant "nowhere near perfect?"

If you’re not clear difference between the two terms (or are grinding your teeth because I didn’t use “burst”), it’s a colloquialism that’s at least common in Southern Indiana where I grew up. “Broken” = non-functional but able to be restored to working order whereas “busted” = kaput, dead, not able to be repaired. Too Human had all kinds of issues ranging from a gun-aiming mechanic which was…sub-par to the constantly-referenced Valkyrie death-scene animation. (When you died, which happened a lot, a Valkyrie would appear over your body and recover it while the game loaded the last checkpoint. It took forever and was annoying), but were those issues so serious as to render the thought of sequels as exercises in futility? In a word: no.

Although I trend pretty strongly towards the completionist side of the gamer spectrum, I’m not a masochist. If a game is totally busted and not fun to play, I have no qualms about quitting and playing something else. Too Human had plenty of problems (and totally deserves its metacritic score of 65), but I played all the way through and don’t consider it a waste of my time. It wasn’t a bad experience and the idea and basic gameplay elements were solid, so the concept of finishing the trilogy isn’t immediately DOA. Still, there’s some serious fixin’ to be done.

When you’re repairing something, it’s best to have a plan of attack that systematically categorizes what’s broken and how to fix it, so here’s my list:

Different people might have different opinions on what needs work and what was fine, but to paraphrase Adam Sandler in The Wedding Singer, I have the microphone and you don’t. I’d really like to get excited about the next Too Human, particularly since Silicon Knights is responsible for one of my favorite games of all time (Eternal Darkness) and Too Human showed a lot of promise even though it didn’t deliver. Mr. Dyack? Silicon Knights? Do you have your pens and notebooks ready? Because…Here. We. Go.

Everyone loves a good plot twist if it’s done well (even if everyone who’s ever read the Gylfaginning or American Gods already knew Loki was a bad guy). Prime example: “Luke! I am your father!” Unless you speak Dutch, you never saw that coming (“vadder” is dutch for “father”). On the other hand, getting into a story at the beginning and discovering quickly that the plot is full of elements for which you have no frame of reference is no fun whatsoever…and it was a serious problem in Too Human. The game used cut scenes to tell the story and unfortunately, those cut scenes were full of meaningful glances or oblique references from the get-go. Without a codex to fall back on, I remember feeling confused and frustrated that there were story elements I wasn’t getting and it wasn’t because it was a difficult story to follow, it was because there were important elements completely missing from the story.

Fixing this problem from Too Human to Three Human or whatever it’s going to be called is straightforward: get a lore-master and pay attention to the details. I’d probably storyboard it and then have someone who didn’t work on the game from the beginning check out the storyboard to figure out if the “common knowledge” in the studio was actually “common” or if the story had become so ingrained with the writers and editors inside the studio that it resulted in carelessness with the dialog and story telling. Too Human was an action RPG and not multiplayer focused beyond its co-op. If its sequels are planning on following that model, a strong storyline is absolutely necessary. As an action RPG, though the “action” part needs some work, too. 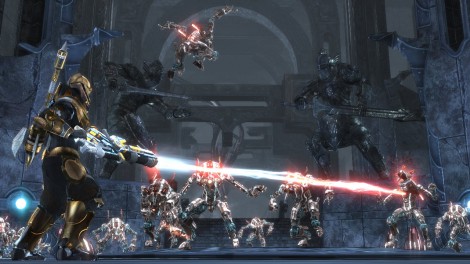 Like the Bengals Offensive Line, this plasma rifle only LOOKS dangerous.

The gameplay of Too Human took some hits and some of them were more legitimate than others. There have been complaints about difficulty, but I’ve got a pretty low tolerance for that – I don’t mind difficulty and I don’t like games that automatically aim for the lowest common denominator. I like a challenge. On the other hand, there have been complaints about the controls and weaponry in the game and those I share. Too Human tried to integrate the gun-and-swordplay of Devil May Cry into a deeper game structure and was only partially successful; it was probably the most frustrating part of the game since it was obvious how much potential it had if it were tweaked properly. The auto-aim, dual-stick targeting and weapon power were all out-of-tune.

If Silicon Knights actually does turn out a sequel, they don’t have to tear the entire system down and rebuild it, but it will definitely need some work. There is never a time when you’re using firearms that you feel that they’re anything other than distractions to your enemies. It doesn’t seem to matter whether it’s a laser, a pistol or a machine gun, the gun play is underwhelming. Too Human spent a lot of energy in making your character’s load-out highly customizable with loads of different weapons and modifiers (in the form of runes); if its sequels follow that model, care should be taken that the actual performance of the long-range weapons is more than an afterthought. In addition to being underwhelming in their effectiveness, picking out which enemies you actually wanted to target was a serious chore; the system for doing that should probably be totally reworked. On the other hand, the melee combat was very well done, particularly after you get a handle on it. Stringing together combos and getting faster and more powerful as you did was a lot of fun, particularly since you could do so with just a push of the analog stick. When you’re surrounded by dozens of enemies, dashing from one to another, juggling them in the air and thrashing the bunch of them was probably my favorite part of the game.

This is a two-fer category that orbits around the same problem: sloppy interface. Managing your and weapons in Too Human wasn’t that difficult. Keeping track of the runes you had collected and how you could combine them was. Since runes were slotted into sockets on weapons and armor to improve them, that was a problem. If Diablo II made this uncomplicated in 2000, Silicon Knights can definitely do it in 2012 or whenever the next Too Human game comes out. 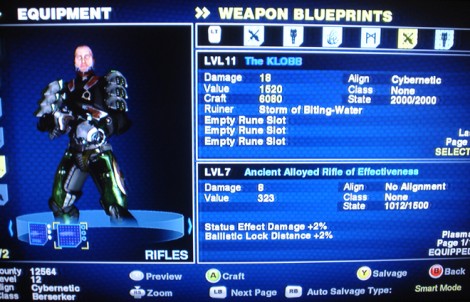 If I wanted glowing white eyes, I would have played Arkham Asylum.

On the other side of the coin was the non-combat exploration and interaction, particularly in the virtual reality world of the Norns. Put simply, it was difficult to navigate the world of the Aesir. It wasn’t always clear where you supposed to go and it was usually in an area full of elements that looked like interactive but weren’t. The non-combat sections of the game were by far the most frustrating and need the most work. The only thing that made up for them was a fairly fun core gameplay mechanic and even that had a serious mar. 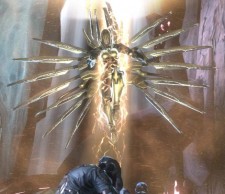 I'm dyin' here, think you could move it along, sister?

Everyone who played Too Human hated the Valkyrie scene when they died, mainly because you died a lot and the scene took something on the order of 20 seconds to play through. Dyack’s most recent response was a little disjointed – either the game was too hard for casual gamers (boo friggin’ hoo) or the fact that the Mass Effect load screen post-death was longer was an excuse. The former is just a horrible, horrible thing to say when no casual gamer is going to get into a deep action RPG and the latter is absurd because it’s an issue of apples and cam-shafts (i.e., they have no relationship to one another). Howso? I didn’t die 17,000 times in Mass Effect, you could save whenever you wanted in Mass Effect and when you died in Mass Effect, it was normally due to carelessness, not an integral part of the game (which it should be in an action-heavy game like Too Human).

Repair instructions for the Valkyrie: Get rid of the cut scene. Call Team Meat and ask for help.

It’s broken, so fix it

At the time of Too Human’s release was probably my most-looked-forward-to game… and then I played it. It wasn’t busted, but it was broken. If Silicon Knights is serious in its intention to resurrect the series and turn out a sequel, it has its work cut out for it, but I think it’s a studio with some solid talent in the stables and capable of turning out great games. I’m just hoping that if it does move forward with Baldur and the Frost Giants, it swallows its collective ego and takes a long and hard look about what was successful in the first game and should be retained and what wasn’t and should be thrown on a heaping pile of burning corpses for disposal.

3 Comments → Hope for the Broken Too Human Trilogy