I look out onto the Martian landscape with the eyes of a sociopath, the possible consequences of my actions unknown as the thirst for destruction sets itself upon me. The volley of rockets from a homemade launcher clip my first target, a cylindrical building with a mass of tubes spouting from all sides like the tentacles of a frozen squid. The subsequent explosion still gives me a sliver of satisfaction as flames erupt and scrap metal flies into the air. After a few more rockets, the structure is razed and I am pleased. 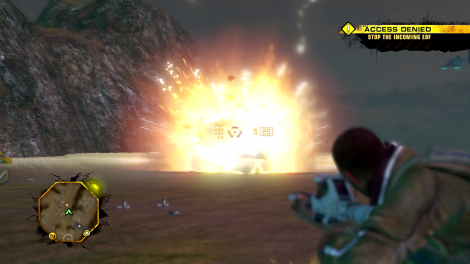 This explosion wasn't even part of the mission...oh well

It may seem simple and crazy, but I like to make things go boom. I feel like I’m a relatively stable guy, but watching burning buildings collapse under their own weight has always interested me and since I’m not a real sociopath, I have used games to live out that dark fantasy (though bad guys have always been my victims in games, so that may be a saving grace).

Destruction in video games before this past generation was never truly satisfying for me. Sure, I could blow up people and vehicles, but limitations still stood in place and rampant elimination of structures was impossible. As the technology improved, so did my glee as the once-unflinching backgrounds began showing wear and tear from my latest bazooka test. Games like Red Faction: Guerilla and Battlefield: Bad Company 2 gave me the ability to break everything, and break it I did. Soon, developers began testing the waters, pushing the limits of destructibility for games and allowing me to live out truly memorable sequences. I was amazed at the possibilities, and will never truly grasp the power needed that allowed me such freedom. 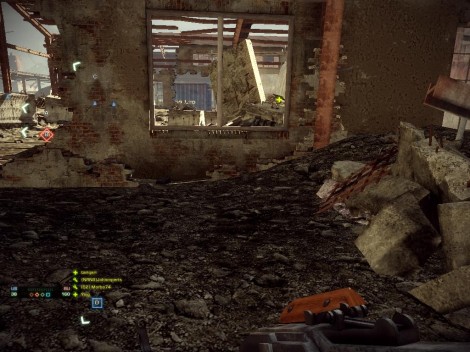 Tough to hide when the walls start disappearing

Making stuff is fun too!

The strange thing is, as my ability to destroy grows, a parallel and yet quite opposite event is also transpiring, one characterized by games like Minecraft and Terraria. Despite my lust for destruction, another part of me is being compelled to create. Gun powder and debris has been replaced by mortar and brick, as whole towns are forming at the click of my mouse. In my youth, I had a fascination with LEGO and, as I grew, was drawn to games like Sim City but eventually drifted away from them as the more-mature games offered the blood and gore I had yet to experience. Yet, despite the high tech approach to war being heralded by my favorite triple-A companies now, a couple of low-tech Indie groups are taking back my brain and what little focus I have. 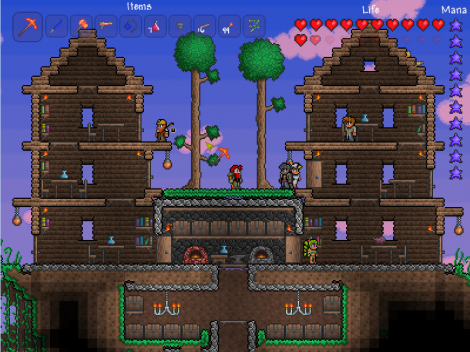 Like most things in my life, opposite interests have always made it difficult for me to stay focused and functioning in a world that demands a consistent viewpoint and loves to take sides. I work as a social worker, yet am quite conservative in a lot of my political viewpoints. I love endurance sports, yet play 20+ hours of games a week (in addition to writing for this site). It’s an internal tug of war that I’ve dealt with; I’ve always thought that a victor should be decided, but as I began really thinking through my recent game choices, I came to a conclusion that I always wanted to be true but never expected it could: I need to become content with building AND blowing things up. The world is grey, always has been and always will be.

However, things grew complicated as I began to think about others in these regards. Is the question to destroy or to create also a query into good and evil, right and wrong, responsible and irresponsible? While it seems simple to attach a moral standing to a general game mechanic, it does make you wonder. There are people out there that ONLY like destruction, so is that a clue to their character or merely a coincidence?

As I continued to ponder, I realized that my first observation, this idea of grey, answered the questions that followed. I wasn’t destroying good people and children’s hospitals, destruction was just the only way to maintain order in a disordered  digital world. I am sure that the construction tools in any game can be used for evil purposes, so this idea of creation is not completely innocent either. What I came to realize is that games allow us the freedom to live in worlds that we know aren’t possible and test interests and curiosities that have nothing to do with who we are or are not. Create or destroy ’til your heart’s content. In the end, it’s all like dancing; no one tries to validate it, we just do it because that’s what our brains tell us to do.