The game I played is not in its finished state, so certain features may be missing or buggy as a result.

When I first saw Terraria, comparisons to the king of indie construction games, Minecraft, quickly popped into my head. While the game does resemble a 2D version of the aforementioned super hit, its action ambitions are much loftier and way more fun.

I wasn’t able to play the multiplayer version because I don’t have many friends, and those that I do have didn’t have access to a server. Sure, I could have started one, but I’m lazy, so I stuck to playing by myself in my lonely, lonely man cave (it’s not that lonely, my cats were there…crap, that’s a dork trifecta: games, loneliness and cats…hopefully my wife gets back from Scotland soon).

Before you do anything, you have to create a character and a world to toy around in. Character creation is pretty simple and features an assortment of options for your particular look while world creation merely requires you to select a name for your land of opportunity. I called my level Ethanville, because my name is Ethan and I’m freaking in charge. Once the level loads, you’re plopped down in the thick of Terraria with an axe, a pick axe and a blank canvas to begin modifying. There’s a helpful guide roaming around that gives you some tips on how to play the game, but tutorials are for losers and I’m a winner so I avoided his cheerful advice. In all honesty, he didn’t have a trustworthy face, so I probably saved myself future allegiance confusion. 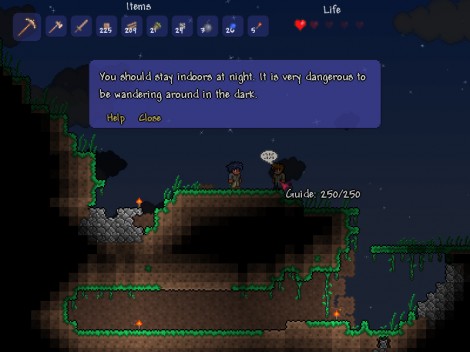 Thanks for the advice Dr. Phil, but I'll take my chances

The graphics reminded of classic 16-bit Squaresoft titles like Secret of Mana, a style in which I’ve always been a fan of.  The colors are vibrant and the low-tech approach to the game’s look should allow for a ton of on screen objects and action without any of that nasty slow down that tends to happen when chaos ensues in other games. I’ll be curious to see how smooth multiplayer is because in the end, that’s going to be the make or break aspect of this game in terms of a rabid fanbase (which I really believe Terraria is going to have).

My first order of business was to get with the geological manipulation and deforestation. Terraria has a pretty simple point and click system of harvesting material and building structures. Before too long, I had built a small shanty with stone floors and a dirt ceiling. This isn’t Laguna Beach, so accessorizing wasn’t a priority at this time, however, I would need to focus on making livable structures in the future if I am going to be able to attract the numerous NPCs in the game. There are a variety of these characters that will move in to the buildings you construct after certain criteria are met, all offering unique services that include trade, nursing and magic lessons.

As tends to happen in these sorts of games, my digging and tree chopping was interrupted by a bouncing ball of slime. No disrespect to the indigenous species of this realm, but there’s a reason it’s named after me. I quickly hacked at it with my pick axe, finally killing it and collecting the goods it dropped after it exploded.  I would later find a sword that made slicing slime and other baddies a bit easier. From what I’ve read, there will be a wide variety of destructive tools for you to wield in the ravenous world of Terraria. In addition to weapons, there are also multiple armor sets and ability enhancing items that will aid you throughout your play. Hopefully, there’s a vacuum available at some point because my rugs are covered in slime and they’re starting to smell like Sasquatch snatch. 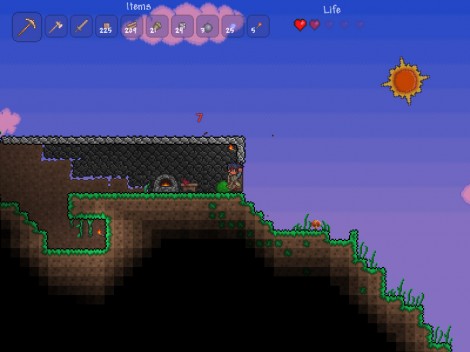 Aaaagggghhhh! You're ruining my sketchers!

As soon as I had enough material, I was able to start crafting items. I had very few options until I created a work bench and stood by it, which then opened up a much longer list of objects with both functional and aesthetic usability. The creation system is nice because it doesn’t require you to combine objects together in certain configurations; if you have the material you just have to click the icon and presto, the item appears in your inventory. I tended to rush back to my home base every time I found a new item or building material, which, in reality, is a very poor strategy, but my patience isn’t necessarily intact. Even in my short time with the game, I could access quite a few building options, something that will increase exponentially the further I progress and after subsequent updates from the developers.

The toy is always at the bottom of the cereal box

Like in real life, anything that’s useful to humanity is deep underground and heavily guarded by scary skeletons and other creepy critters, so I began my journey downwards in an attempt to find sparkly crap for building bigger, better items. As I ventured below the surface, I stumbled across a small pond and decided to see what would happen if I started digging inside of it. As the dirt eroded, the water shifted dynamically which is a nice little touch that looks pretty neat while it’s occurring. I imagine there is lava somewhere underground, and knowing that, my mind raced with the prospects of bathing my enemies in a shower of molten rock (the logistics of digging through lava haven’t been worked out completely, but the game does make the boast that the possibilities are limitless). 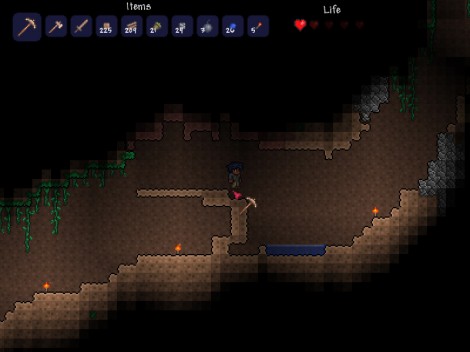 Caverns can be scary, but worth exploring if you want to find anything cool

I’m excited about the prospects Terraria has to offer, but it’s release is a tad bittersweet because I just recovered from my Minecraft obsession. I know I’ll eventually move on, but my wife can only take so many late night conversations about mining. In all seriousness, while Minecraft comparisons are fair, this game has an extra layer of icing on top of the building mechanics and mining that I think make this game even more approachable than Minecraft at this point in it’s life cycle. Making towers is fun, but fighting a large variety of creatures while defending those towers is even better. Terraria is currently available on Steam for $9.99.