Growing up as a little brother to a sister who got into every sport they’d let her play, I’ve seen my share of volleyball matches. Let’s just say I was never driven to participate in one. However, a V’ball match? Now that’s something entirely different because I know the lessons of Super Spike V’ball. 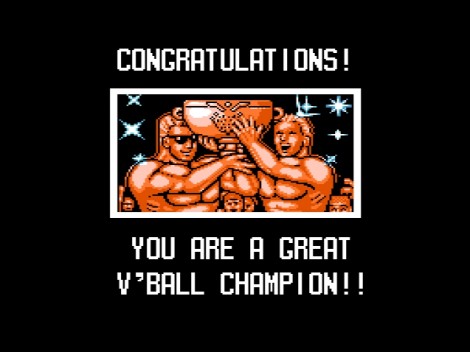 You have a new goal.

The Lessons of Super Spike V’ball 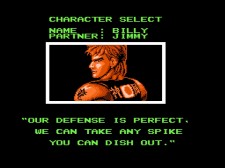 Go fight Abobo or something.

I learned something today. Not everyone was born to be a V’ball player. After witnessing one match, I was compelled to stick to the sidelines. There was a pretty mean duo back in the day. They had a rep of being unbelievable fighters. If your girlfriend was kidnapped, you call Billy and Jimmy. But if your girlfriend needed a V’ball match won with some style, you should look elsewhere. I’m not sure why they even showed up, come to think of it. Defense does not win V’ball. Thanks, Super Spike V’ball.

I learned something today. Professional sports are a mess, but at least when a homer ref is screwing you over, they look and act professionally. Pro referees in other sports are hand picked for the most important matches. Only the most experienced (or most expensive) refs officate a championship match. Those refs don’t waste their time with exhibitions or the lower ranks. Unfortunately, V’ball’s one big draw back is that there is only one referee. That means only one match anywhere at a time which has really hurt the growth of the sport. The baffling thing though is this ref doesn’t treat any game any differently. She always shows up in the same bathing suit, with the same stupid visor. Not to mention that I can never tell if she’s making calls or flirting with the winning team. I don’t know what kind of stranglehold she has on the rules of the sport, but she needs to be stopped. Thanks, Super Spike V’ball. 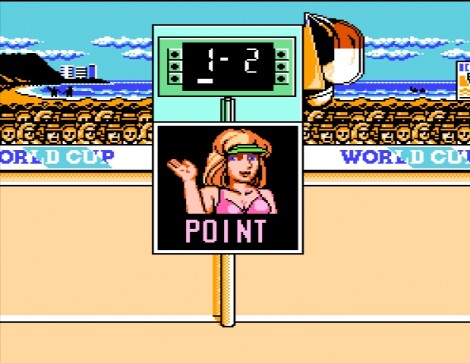 She refs every single match, but can't afford more than one visor.

USSR was good at everything 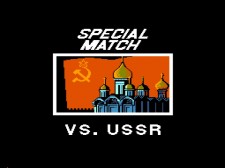 Let us have one sport where we don't have to play you.

I learned something today. V’ball peaked in the early 90’s. Being an alternative sport with limited sanctioned matches, I was surprised to find out that the sport actually had a pretty entertaining world circuit. Now, I know the United States and USSR tended to dominate world sports, but I still couldn’t believe USSR was the top ranked team in V’ball, too. You’d think our U.S. Navy Team could have taken them, but they were only ranked #2. I, for one, think the USSR was cheating. Next thing you’re gonna tell me is that they dominated dodgeball, too. Thanks, Super Spike V’ball.

The art of the Super Spike has been lost

I learned something today. The one thing that volleyball and V’ball share is that the only exciting moment in the game is when the ball is spiked. Where I thought V’ball would take over though, was in that its players were the only ones skilled enough to pull off a Super Spike. This devastating (and shiny) version of the common spike, when executed perfectly, was known to knock opponents off the court. The ball would hit with so much force that the word KABOOM would manifest as it struck. It really had to be seen to be believed, because I don’t have to tell you that the athletes these days do not pull off anything nearly as spectacular (or manifesty) as a Super Spike. Thanks, Super Spike V’ball. 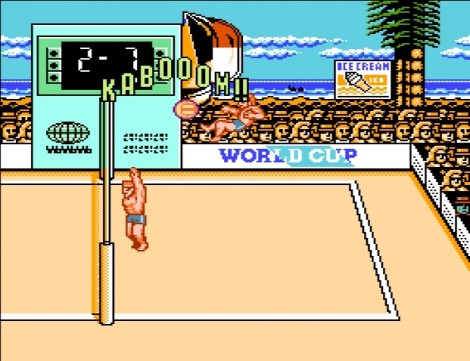 That's how you do it.

Let’s face it: pro sports are boring these days. There are alternative ways to play the games we love to keep things fresh. Not every version has to turn out like the XFL. I really believe that if we bring back V’ball, athletes (and our armed forces) will recapture the imagination of today’s fans. All it takes is an amazing feat capable of generating words out of thin air. Thanks, video games.