Hey kids, playing video games about sweet robot suits is great, but remember that prejudice itself is not. Having preconcieved issues with people of different races, backgrounds or idealogical foundations is straight up whack.

When people think about downloadable gaming, they tend to think of the myriad of unique puzzle games and retro-influenced side scrollers that populate the digital marketplaces of their systems of choice. Few would expect to find a full blown FPS with multiplayer and single player components and even fewer would expect that same game to cost as much as its arcade-inspired brethren. Section 8: Prejudice is not only a huge bargain, it’s a deceptively deep game that’s competent enough to stand on its among the vast sea that is the FPS genre.

A tale as old as time

Essentially, Section 8: Prejudice tells the tale of a group of dudes in robot suits, hanging out and dealing with the day to day problems that arise in their professional and personal lives. Due to differing value systems, some of these mechanically enhanced bros tend to cause problems, thus they are cast into the role of bad guys (Arm of Orion) and fight with the good guys (8th Armored Infantry) in a quest to determine who looks the classiest in his gear.  I’m sure there’s more to it than that, but I glazed over during the juicer tidbits throughout the single player campaign, which honestly felt more like a tutorial (which I think is what Timegate Studios was going for). That’s not necessarily a bad thing because the game, at its core, is driven by a robust multiplayer. If you picked this game up for the campaign, you’re an idiot. 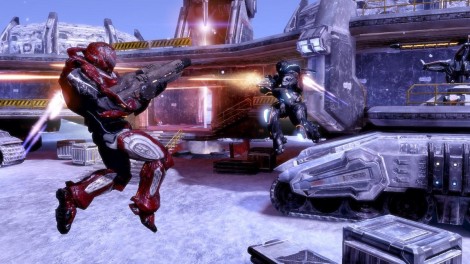 In short, S8:P’s  multiplayer is fun, extremely fun, in fact, but not in the same way as other FPS games where fun equates to having the best kill-to-death ratio.  This game’s charm comes from the fact that the action rarely stops and something new is happening at all times (actually, comparisons to Super Smash Brothers are appropriate in this situation).

Why spawn when you can fall from the sky?

Instead of normal spawn points, you rocket in from orbit, flying to Earth and impacting the ground like a flesh-filled missile. Actually, surviving this free fall isn’t guaranteed, as anti-air batteries fill the sky with lead and will smoke you silly should you choose to land in enemy territory, so keeping enemies from creating new anti-air guns is important if you want your teammates to land safely and intact.

Landed safely, great, but don’t get too cocky, hot shot, as there are 32 people fighting it out around you, and 16 of them aren’t your friends. Despite the levels being large, with that amount of people duking it out, it’s often pretty easy to find a target…or be targeted, which can be a low point in your experience should you have a run of bad luck. Throw in the numerous vehicles (including a sweet mech that can grab enemies and smash them into the ground), turrets and support strikes that can be purchased after earning enough cash during a game and you have a recipe for chaotic brutality that will never let up. 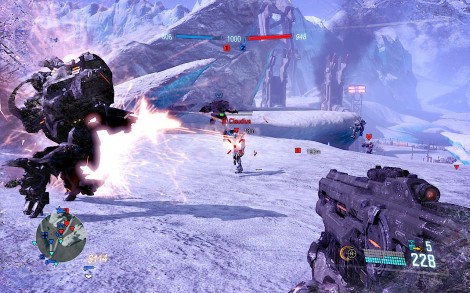 This is down time in the world of Section 8: Prejudice

There are a couple different flavors of multiplayer in S8:P including  Swarm mode (you and up to 3 teammates protecting a control point from CPU soldiers), Assault Mode ( teams are separated into attackers and defenders and fight over territory) and Conquest Mode (the not-so-standard core mulitplayer mode). The unique aspect of Conquest mode is that, in addition to controlling the most territory points, random missions pop up throughout your play time that reward your team with victory points and other swag should they be completed in a timely fashion. These side quests include everything from attacking enemy convoys to  infiltrating an opposing base and stealing data. These missions (called dynamic combat missions or DCM) really help the games to stay fresh and prevent players from “turtling up” while in a dominant position.

Suits are great, but it’s the accessories that make you shine

Another great quality of the game is the customization available when choosing your character load out. There is a plethora of guns that can be further modified to fit your particular type of play (an example being incendiary rounds for people who like their enemies to die a slow death) as well as other gadgets that contribute to the sort of soldier you aspire to be. You like fixing stuff? Grab a repair tool and be an engineer. Rockets rock your socks? Be a bazooka boy (it’s called something different in the game). On top of that, you can also adjust attributes such as armor, bullet damage, stealth, etc., in order to really differentiate you from the rest of your robo-hoodlum buddies. Did I mention that everyone gets a jet pack and super speed? Yeah, it’s a freaking smorgasbord of cool crap, enough to help S8:P stand far away from other super popular FPS games featuring robotically enhanced heroes. 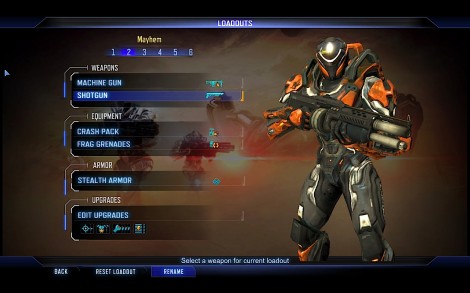 Should I pack the pistol or the shotgun? Ohhhh, this weight limit on baggage is infuriating

The game is not without its issues, as the graphics won’t make your eyes bleed (which used to be a plus back in the day) and the chaos that unfolds can be a bit much at times.  As mentioned, the single player isn’t going to win an Oscar (and not just because there is no such category) so I can’t imagine many people feeling all that inclined to represent game characters in the unnerving world of cosplay.

Unless you’re one of those dorks that only plays one single game over and over in order to become the best in the  universe, then Section 8: Prejudice has enough to validate parting with those three five dollar bills collecting dust in your ill-fitting khakis.