Meanwhile… we’ve actually been playing games. Each week we recap our recent gaming experiences and tell you what we’re looking forward to, so you can use your time more wisely than we have. This week sees the debut of jmgist who survived all of our hazing rituals with his wit intact.

JDevL
Things have simplified in the past week. I did end up sticking to my needler, er guns, and wound up finishing the single player portion of Halo 3: ODST which I will be reviewing soon. In a moment of weakness, I picked up Monster Hunter Tri and it has indeed taken over my life. I recommend caution to anyone that approaches that game. However, I’m still going to pick up Alan Wake today and I have vowed to see that creepy adventure through till the end before going back under to hunt monsters. At which point, come save me if you don’t see any signs of life.

Colefacekilla
Since the Steam Client was released for Mac this past week, I’ve spent a lot of time playing Portal. It is a game I’ve always wanted to play but never got around to it and I’m loving it. Way more involved than I expected. Red Dead Redemption is looming large on my horizon. Every single piece of media I see on this game has me salivating and I can’t really put my finger on why. I haven’t played a sandbox game since GTAIV so that could be the reason. 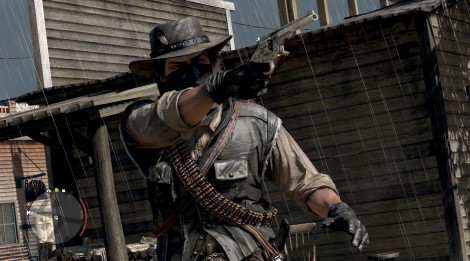 Better than Gun.Smoke I hear

EndlessBen
Mass Effect 2, Mass Effect 2 and more Mass Effect 2. I finally finished the first game at the end of last week and I’m excitedly beginning the second. Though, I am looking forward to playing several of this week’s releases, like Red Dead Redemption, Alan Wake and Split/Second, I have a feeling I will be lost in Citadel space for a while before I get around to those. Unless that’s not where I am in the second game… Don’t tell me!

Pixelmixer
This week I’ll still be playing quite a bit of Modern Warfare 2, the multiplayer is challenging and changes with every match, so it still hasn’t gotten old with me (I’m not planning to buy the next round of DLC). Red Dead Redemption is probably the game to look out for this week, I’m hoping to find a few minutes to get some gameplay in on that one. I recently installed the Wii Homebrew channel with an SNES emulator, so I’ve been trying to get some game time in with SNES games, this week NBA Jam.

In the wake of Iron Man 2, I found that I desired more spandex, more gadgetry and additional acts of superheroism. Thankfully, a scan of my ever-growing backlog revealed Batman: Arkham Asylum, which asked that I simply finally finish the playthrough I began months ago, and X-Men Origins: Wolverine, which I had yet to even crack open. I fully realize how late to the party I am on Batman, but what a damn fine party it is, no?. I’m not sure that a party was ever thrown for the Wolverine title, but allow me to speak of its virtues for a moment…the game kind of owns, and utterly transcends the film from which it spawned (not as though that was a difficult task for a film that decided to literally sew Deadpool’s mouth shut and imbue him with Cyclops’s signature power). The game deserves praise for accurately demonstrating what happens to fools that come into contact with adamantium blades (Hint: They bleed, a lot, and lose limbs…often in glorious slow-motion).