We don’t see as many new franchises by new developers these days, especially in the crowded genres of 3rd person action games and shooters. this is probably for good reason, as it is hard to for games to separate themselves from the pack. Deviating too much from the norms of a popular genre can pretty much break a game for would-be fans. Back in 2003, 3rd person shooters were still figuring out a lot of their strengths. Gamers of the time associated 3rd person games more with traditional platforming or stylized action like Devil May Cry. Pure shooters were reserved for the 1st person perspective. Ratchet and Clank had begun to open things up, but they had a full fledged Sony budget behind them and had plenty of platforming. In addition, 3rd person “character” games were already generic with seemingly every company wanting a mascot platformer to represent them. It was hard to tell when anyone was doing anything significantly different. So, when Activision and Swingin’ Ape Studios decided to release a 3rd person shooter starring little robots, I don’t even think I knew about Metal Arms: Glitch in the System. However, after a month of reading great reviews I decided to give them game a shot, and the game quickly became one of my more memorable experiences of the GC/PS2/Xbox era.

Metal Arms was certainly a little rough around the edges, but these little robots had a lot of personality. While I adjusted to the controls in the first few levels, I was carried through by the characters. Even though the story wasn’t anything special, the voice work was very well done. By the time I was invested in Glitch’s adventures, I had figured out the gameplay and was drawn in further by the variety of the weaponry. Fighting each batch of enemies hearkened back to Mega Man in finding each enemy’s strengths and weakneses compared to my available ammunition. Add in some puzzle solving, big boss battles and a satisfying difficulty curve and I was hooked. 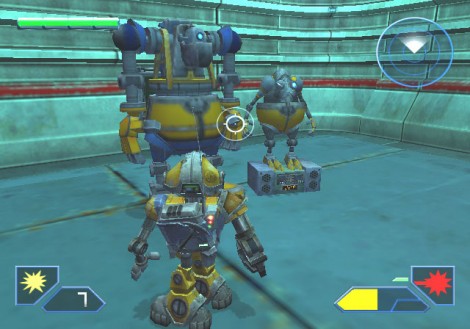 The thing is, Metal Arms went unnoticed by a lot of players and it has been forgotten in the Activision game library ever since. Admittedly, the game had a lot of quirks that made for a bad first impression for most players. Those that survived the first few hours were greeted by an unrelenting difficulty setting that could turn the game into a grind if you weren’t skilled with multiple weapons. If just a little bit of today’s gaming tech was applied to Metal Arms, a remake would finally reveal the fantastic robot adventure that I know is underneath its tough exterior. 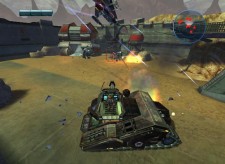 Good lord, the controls were clunky. There is a lot of strafing in Metal Arms and it never felt natural. I couldn’t tell if this was on purpose, to make it feel like you were piloting more of a mech than a normal character, but it took a lot of getting used to. Adopting a true dual analog control scheme is the way to go here. Plus, camera systems have come a long way in 8 years, so let’s get one that feels more over the shoulder than in the anywhere/everywhere style of Super Mario 64. Tightening the controls and camera would allow for a more technical shooting focus, which is where Metal Arms needs to be. Allowing precision shots with specific weapons on the weak points of robots is key to making this game fit inbetween Ratchet and Clank and Gears of War.

Speaking of Gears of War, Glitch needs a cover system. This little robot is outgunned and oversized at every opportunity. He needs to be agile, stealthy, and be able to use his environment to his advantage as much as possible. Again, Metal Arms has to keep its robotic personality so the developers should look towards making the movement feel somewhere inbetween its restricted old school style and the robotic suit enhancements used in Vanquish. I still think the pacing should be on par with Gears of War, but a few jet pack bursts never hurt anyone.

My guns need guns with guns on them

The other major selling point of Metal Arms is its weaponry, but the options of 2003 just won’t do anymore. Enemies need multiple weak points, each with their own unique vulnerabilities to specific ammo types. That rocket may work on that robot’s head, but his knees are only susceptible to metal blades. Your tactics will change depending on what ammo you have access to, and while variety was king in the original, limiting Glitch to 3-4 weapons at a time may make for a better balance and less overwhelming experience. Of course, these weapons need to level up and have special abilities for those who are particularly skillful with them.

As with any remake on a new system, we’ve got to upgrade the graphics and audio. Metal Arms was one of the better looking games in its day, but it was kind of generic. All of its personality came through in the voice work and dialog, so Metal Arms need a sense of style to match up with its great sound. Something colorful without being kiddy, because, in the end, this needs to be a mature game disguised in a Teen rating. There’s no blood and gore, but plenty of gears and oil. Get a few of the Portal writers to come help upgrade the dialog since they have a knack with funny technology cracks that would fit right in with Metal Arms‘ world. 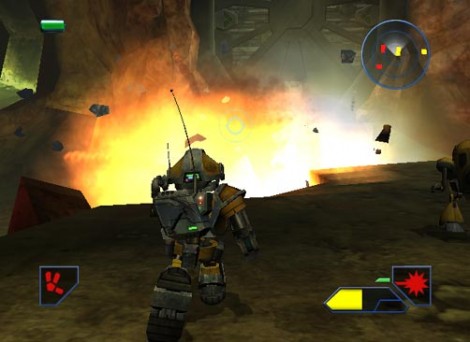 I realize reviving a one-off game that didn’t sell too well isn’t high on Activision’s to-do list, but every time I’m reminded of Metal Arms I think of two things. First, the enterataining “hell yeah” types of conversations I had with the two other gamers I knew who had played the game. Second, the fact that most gamers have no clue that this is a game worth playing. Underneath its completely dismissable package, Metal Arms is one of the best action games of the last console generation. That gameplay will hold up, and with a talented developer with an updated bag of tricks, a Metal Arms: Glitch in the System remake would allow a lot more people to love the game as much as I did. It’s one of those games where the vision was larger than the technology available at the time. Now is the time for a new Glitch.

Metal Arms: Glitch in the System is currently available for download as an Xbox Originals title on Xbox Live.

1 Comment → Remake It So: Metal Arms: Glitch in the System