Most of the games our partners play are fairly casual titles. The easy to get into stuff like Angry Birds, Bejeweled, Diner Dash, and the like usually dominate what little time they may devote to games. So when my wife said she wanted to try out Red Dead Redemption after seeing an ad on tv, I knew it would be a great Yuletide gift from her gamer of a husband. From the moment she started playing Red Dead I could tell she was going to be in it for the long haul. Over the course of a month or so I watched her play through the entire game and here is my interview with her about the experience. 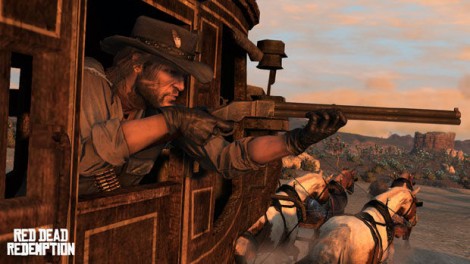 I call it Vera

What did you think of Red Dead Redemption when you first saw it?

(This is what I get for getting her hooked on G4TV!)

How long did it take you to like Red Dead Redemption enough to keep playing it?

It only took me ten minutes. Once I got past the trauma of having to shoot a bunny, I was hooked and needed more.

(She really did hesitate for a least a few seconds before going after them like a zombie bear going after a tasty brain-snack.)

What made you go back to Red Dead?

This game just has an amazing story. It was easy to play and easy to understand what you were doing. Your objectives were clear and you wanted to know more about what was going on in this world. The side missions kept it dynamic and it was just awesome!

(She got VERY good and picking plants, skinning animals, and looting dead folk.) 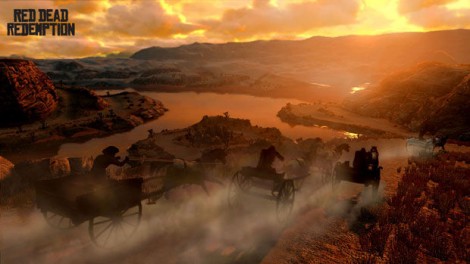 Riding into the sunset is the ministry of silly carts.

Are you the good guy or the bad guy?

I played as the good guy because I’m afraid if I play as the bad guy I won’t get to the right place in the story. But now I’m going to go back through and play as a bad guy since I already know the ending and don’t have to worry about the storyline as much.

(Now she kicks chickens every time she sees one.)

Favorite part/aspect of the game?

It’s really hard to pick just one. I guess the imagery is what stands out to me. Like the fact that as you travel through the different places, everything changes. It’s a very immersive game in that way, and in how the animals and plants interact appropriately with the environment. It didn’t come across as hokey… and shooting stuff was fun.

(She even punched a cow once just to hear it moo.)

How would you describe Red Dead to a friend in order to get them to play it?

It’s freaking awesome. You get to ride on horses, and shoot shit. It’s like the story never ends, so it isn’t a game you get sick of playing really fast. It’s just awesome. And while it has many of the modern game controls, it’s not over the top hard or gory. It’s not a harsh game or a fluff game, it just hits the sweet spot of what it’s trying to do and does it well.

(Seriously, a cow, she punched it… She also screamed when a bear started chasing her, it was hilarious.)

Anything else stand out about the game?

Dueling was a pain in the cooter… I beat the game and I still don’t know how it worked… Also, some of the dead people were creepy. But it’s definitely the best game I’ve played in a while and I can’t wait for L.A. Noire. 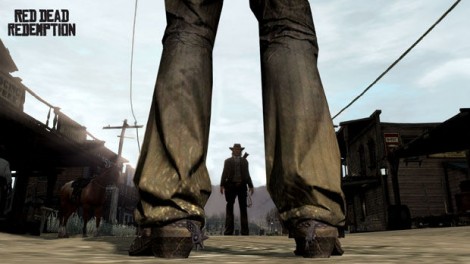 Watching her play through all of Red Dead start to finish was very cool. I got a chance to sit back and watch the game play out like a movie with my wife doing an awesome commentary track. On top of that it was very exciting to see how she would react to a totally new type of game. She even jumped online and posse’d up with a few of our friends from out of town for quite a few killin’ sessions. As much as I want to play that game, watching her beat it really felt fulfilling for me too and I’ll probably just get back to my ever-expanding cue of games to beat and I can’t wait to watch her play L.A. Noire next! (Though, I think I’ll be playing that one myself as well.)