Meanwhile… we’ve actually been playing games. Each week we recap our recent gaming experiences and tell you what we’re looking forward to, so you can use your time more wisely than we have. Coop is back this week, and not surprisingly, he just wants to shoot people, while GiffTor gets sucked into the world of on demand 360 games and remembers how to fly. 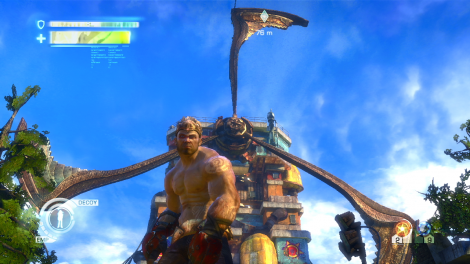 Standing in front of a windmill makes anyone look like a badass.

Wow. I had a great gaming week. Not only did I get in a little more MLB 2K11 but I achieved a goal that I set out for myself at the beginning of my weekend. I didn’t necessarily think I would reach that goal, but after a few lengthy play sessions I beat Enslaved: Odyssey to the West. If you haven’t played it, it is really cheap at every store so you can’t use budget as an excuse. Hell, I’d even let you borrow my copy. Enslaved needs to be played by more people, not only to support Ninja Theory and the awesome work they did in telling a beautiful story, but it is because of the story that makes it stand out. For the first time in a long time I connected with Trip, Monkey and Pigsy. I was worried about them completing their mission and rooting for Trip and Monkey to fall in love. That is something that doesn’t happen very often with me and video games. Play this game, so Justin and I have more people to talk about it with. It’s short. You can beat it in one sitting if you are dedicated.  I would have, but life got in the way.

This week’s game on the schedule is Alan Wake. I finished the first chapter a few months ago but never played it after that. It’s time to get into the creepiness and devot a weekend to that game. I hope I don’t get too scared. 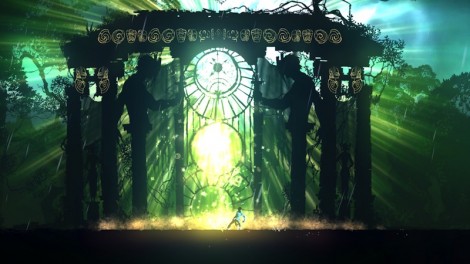 Best looking thing on XBLA in a while.

I really don’t know how I did it. But somehow I turned the weekend into an old school marathon of finishing multiple games. I finished the Story Mode in Mortal Kombat, much to the pain of my thumb. Then I regrouped and pushed through Portal 2‘s single player campaign. Granted both are short games, but still I was pretty satisfied with my accomplishment. Especially considering how great the games are, and nothing beats the Ah-ha! moments of Portal 2 (more on Mortal Kombat soon). Now, I just need to find a few a co-op buddy. Who is in?

All of a sudden this week seems pretty wide open. I want to spend more time with Outland on XBLA as it has taken one of my favorite game mechanics (polarity from Ikaruga) and applied it to a platforming game. I’ve heard the game gets pretty brutal, so I want to push through while I’m still excited about it. Otherwise I will be jumping back to WoW as we are nearing the end of The Burning Crusade dungeons and getting ready for the Wrath of the Lich King content. However, I have a feeling that our crew of the Cursed on the Gears of War 3 Beta may go get in more than a few rounds of that wonderful tease of a game. 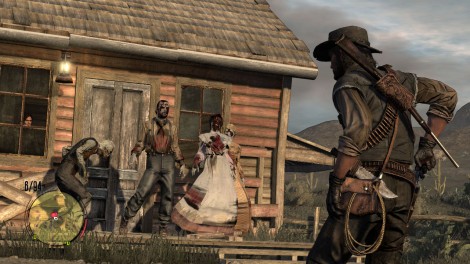 I don't want to be presumptuous and assume zombies are the reason why Ethan is playing Red Dead.

I played the fuck out of Red Dead Redemption this weekend. I’d never before put as much focus into it as I did on Saturday and Sunday, and when the oppurtunity arose (wife out of town, tired after a 5k) I dove headfirst into the game and haven’t looked back. It was my longest marathon session in some time and I am happy I got though the barrier that had held me back (I play too many huge games). With the mini marathon coming up soon, it couldn’t have come at a worse time. A funny story from my exploits is that once my wife got home, she scolded me for hunting in the game as if the animals had real feelings. I told her, just like in reality, animals are there to be shot and eaten or just slain for fun. Duh.

Finished up the campaign for the Imperial Guard on DoW2: Retribution and moved onto the Tyranids. Actually (and surprisingly) I’ve enjoyed being the insect like aliens alot more than I did the grunts of the Imperial Guard. That game is still a great bargain and if you haven’t bought it yet, then you’re a total loser freak idiot ( even if you’re not a fan of RTS, I still will judge you by this criteria, grey is too tough…black and white is where it’s at). 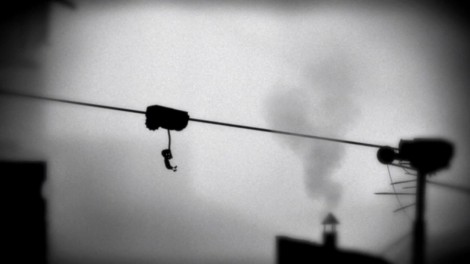 Zip lines are a lot scarier when there are spikes greeting you at the end.

The past month has been kind of all over for me. I bounced back and forth between Crysis 2, Monday Night Combat, Left 4 Dead 2, and Gears 2 while at Net Heads a few different nights. The few nights I spent there reminded me of how much fun online multiplayer is when you’re all together. Sure playing online at everyone’s house is easy, but it just isn’t the same as the good old fashioned lan party.

At my crib, I finally picked up Limbo while it was on sale. It’s really an awesome looking game.  It’s creepy and challenging, but i can already see how short it is. It’s fine for the price though. Most longer games cost you at least 3 times as much. I probably made it about 60% of the way through that and decided to spend a little time with the Kinect I got for free from attending the Mix ’11. Call me lazy, but I still prefer to just sit on the couch with a controller. There also isn’t much to pick from.  I can see where it would be fun at a big party with a lot of alcohol involved, but by myself I just felt dumb.

The rest of my month as well as the next few weeks will probably only be spent with the Gears of War 3 beta. I really had forgotten how much I loved that game. I never really spent much time with the multi-player, but there’s just something about all of the new updates that have me hooked. Once the beta is over i’ll go back to trying to play catch up on my current stack. I just picked up Vanquish which will more than likely be my next one.  I may also throw in some Bioshock 2 or Borderlands DLC that I have sitting in my queue. Brink has me interested, but I doubt I’ll pick it up right away.  If I purchase another game anytime soon It’ll be Portal 2. 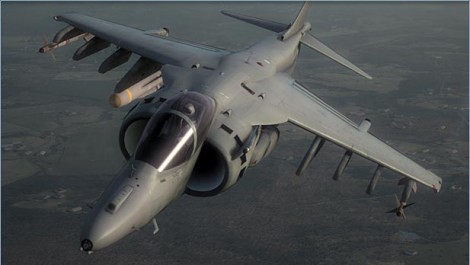 There is no "uncanny valley" for the AV-8B Harrier. Well, there was. But it got blowed up.

I got into two games in the last week – one I’ve had for months and not played and one I’ve wanted for months and surprised JDevL that I didn’t have it: Bionic Commando Rearmed 2 and HAWX 2. I honestly think I downloaded Bionic Commando Rearmed 2 (“BCR:2” because I’m tired of typing it) mistakenly, as in, I wanted to download Bionic Commando Rearmed, but downloaded the sequel instead. Such is life. It’s entertaining and clever, but it’s more Metroid than Bionic Commando: there’s a lot of “backtrack here when you have the proper weapon/tool so that you can get this tool”. It’s a totally legitimate game design…but not when you’re making a game with Bionic Commando in the title. The original was a straightforward side-scrolling shooter. BCR:2 is not. I know it’s hard to tell from text, but there’s a fair amount of disappointment in my voice right now because the original Bionic Commando was one of my first “all nighter” gaming experiences and I loved it, so it’s disappointing to me to see an old IP (Bionic Commando) basically ported to another old IP (Metroid) instead of staying more true to the spirit of its progenitor. Meh.

The other game I got into was HAWX 2. I loved the first one but for some reason didn’t pre-order 2 and then it just sort of…fell off the radar. In the meantime, I had read some sort of lackluster reviews about it but having played it, I think that some of the criticisms were well deserved (some of the controls, particularly in the “off” mode were changed from HAWX, not for the better, and the inability to swap camera modes on the fly is one of the dumber design decisions I’ve seen) and other ones were written by people who suck at flight sims (the one that comes to mind first is the “landing is hard.” No, it’s not. Maybe if you use the landing-assist tool…or you have no concept of how a plane works. Or you have scissors for hands). I’m really, really good at flight sims and have unlocked everything on every Ace Combat since 4, so I know what I’m talking about on this one. Anyway, It was like a $30 digital download on XBLA, which kind of blew my mind. In addition, the graphics, especially in the cutscenes, were good enough that I had to send a text to JDevL saying, “Just downloaded HAWX 2. Seeing the cutscene and in-game animation…what the **** is the next gen system going to look like?!” So, yeah. It’s shiny. And I love it. Oh, and I may need a “gaming buddy” to remind me to move on to all of the great games coming out this summer.