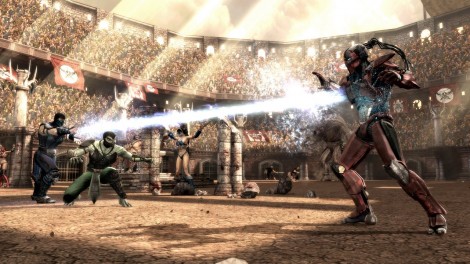 How much are tickets?

I don’t consider myself particularly good at fighting games, nor do I consider myself a huge fan of the genre. What draws me into a fighting game is the action, the characters, and whether or not you feel like a bad ass when you win a match. That’s why Mortal Kombat has always appealed to me, the very idea of a fatality, a finishing move, to put that exclamation mark on your victory made me want to invest in getting to know these characters years ago. However, it had been almost a decade since a Mortal Kombat game grabbed me enough to learn its tricks. Since then, I had soured on the genre as a whole, as my days of having other peers to compete against had gone away. I struggled to find a reason to venture solo into another full priced fighting game. No matter how great the previews looked for Mortal Kombat returning to its roots, I couldn’t help but wonder if there would be enough to draw in us casual fighters for a worthwhile experience. Well, my newly callused thumb can attest to the fact that not only is 2011’s Mortal Kombat is the most complete fighting game on consoles, but Mortal Kombat will hook its dirty claws deep into the gamer who takes even the slightest bit of satisfaction from winning a blood soaked fight.

From the familiar ashes

Mortal Kombat and its development team managed to escape the crumbling Midway Games when they both got picked up by Warner Bros in 2009. For as uncertain as the future for the series seemed at the time, NetherRealm Studios has rediscovered the soul of Mortal Kombat by returning the fight to the 2D plane while keeping the graphics rendered in 3D. The fact that the game can feel both instantly familiar and incredibly modern is shocking to someone who played through any of the solid-but-flawed MK games in recent years. Renaming the game to just Mortal Kombat was the perfect move, as fans of the original games and new fans will both feel comfortable in the tournament to save Earthrealm. It’s not so much of a redefinition of MK as it is a refocusing of the game on its strengths as both a fighting game and a collection of its greatest cast of characters.

Here’s the funny thing about MK’s graphics: the old MK games used to get a lot of flack for being offensive, bloody, disturbing, etc., but it took until 2011 for MK to actually fulfill those “promises.” The world of Mortal Kombat certainly has its own character and cannot be taken too seriously, but seeing smart updates to individualize each fighter is a genesis that fans have been waiting a long time for. While these changes have taken place gradually over the years, they now seem fully realized. We’ve come along way from the same ninja in different colors representing different characters. You won’t be confusing Smoke and Reptile with Scorpion any time soon. While each character has his own share of outfits that are both new to this version and updates of old costumes, the most impactful addition to the character models was their ability to show damage over the course of the fight. Scorpion’s skull face is even more disturbing through a tattered mask and let’s just say the women’s costumes continue to be impressive with their gravity defying abilities. I was also struck not only by the range of the environments, but their subtle details in the background. You have classic upgrades and new locations across Outland and into Earthrealm with plenty of environmental fatality options. The colosseum and city street fights stood out to me the most because of they have large demon/dragon creatures fighting in the background during your seemingly important one on one battle. 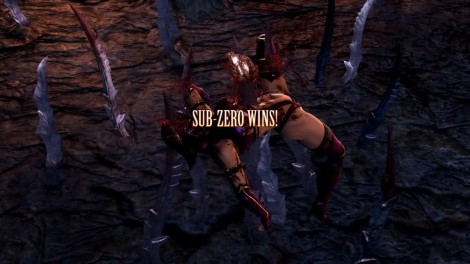 I won’t kid you though, the graphics really pulled me in when the fighting turned bloody. It should go without saying with this franchise’s history and the M rating, but the fatalities and (awesome) X-ray moves featured in this game are not meant for kids or anyone with a squeamish stomach. Breaking bones, severed limbs, dangling tendons, eye gouging, and exploding skulls are an every fight occurence. They are spectacular if you are a fan of gore. I even found myself a bit shocked at the brutality of the more simple fatalities. When dealing with decapitations and broken torsos, you’d think a gunshot would be pretty tame, but there is nothing tame about how up close and personal the violence can get in Mortal Kombat. It’s not for everyone, but for fans, you can tell the MK team has wanted to show these off for a long time and they do not disappoint.

That’s actually kind of messed up

So far so good right? But not great. MK games have never been slouches, they just suffered from the same tired trappings that all fighting games fell into until the genre’s recent uprising. However, even as good as some of the newer games have been, they were all short lived for anyone without a steady crew of gamers to play against to keep them fresh. If you weren’t into competitive multiplayer, there just wasn’t much for you other than the basic single player ladder tournaments and weak quest mode alternatives. What Mortal Kombat has done with their story mode is give gravity and legitmacy to a previously loosely defined game universe. Playing through the story as it revisits the tournaments of MK 1 and 2 before thrusting us into an altered version of MK: Armageddon finally establishes a reason to care about the other 20 characters in the universe. You play through each chapter of the story as one character through 3-5 fights per chapter. Some of the fights are part of the tournament, while other fights take place when Earthrealm characters seek out answers and run into resistance from Shao Kahn’s forces. The transitions between cutscene and fight are seamless, making each fight feel more natural than two fighters showing up at a pretermined time in a pit. The story is chock full of cheesy one liners that action fans will love, but overall the narrative succeeds in giving each fight and character some weight.

While I finished the story mode, it wasn’t because I was driven to see the conclusion of the story. The story existed enough to propel me forward to want to learn how to play each character. There were multiple characters introduced over the course of the history of the franchise that I had written off as too ridiculous. In particular, the cyberninjas, Cyrax and Sektor. Robots in Mortal Kombat just didn’t fit into that universe for me, so I found myself playing the same old characters; each game was starting to get redundant and I was annoyed every time I fought against the arbitrary characters that were just filling up the roster. Early on, you get to play as Cyrax, which opened up much more of the background behind that cyberninja initiative. While no less ridiculous as a high-level concept, it fit with everything else that was going on. Plus, after a few battles and having to win as Cyrax, I began to understand how to play as him. By the end of the game, I still have my favorite characters, but I don’t feel the aversion to trying to play as the other characters anymore. Suddenly the roster of 25+ characters has a ton of replay value and the credit is mainly due to the effective structure of the story mode.

As for the fighting itself, the controls are as tight as MK has ever been. I never felt hindered by the 360 controller and its d-pad and I didn’t get into any major arguments with my XBox (probably due to my preference for the way special moves are handled in MK versus other fighting games). At any time, you can pause the game to look up special moves, combos, and even fatalities. While fighting, your character builds up a power meter that can be used for enhanced versions of your special moves or to perform a reversal when you are caught in a combo from your enemy. When the meter is fully powered up, you gain access to a devastating X-ray move. This move is executed with the same buttons for every character, and pauses the action for a brief cutscene as your character performs a bone-breaking combo. I’m a huge fan of super moves that pause the action in fighting games just enough so that both players can feel the momentum shift.  It’s the next best feeling to a fatality, and a great addition to MK. 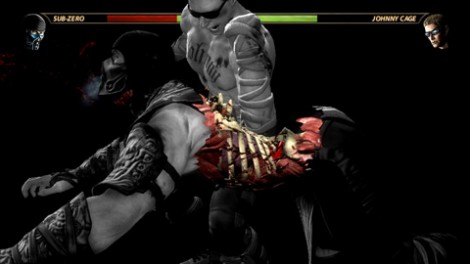 One of the tamer breaks

All of that seems to be plenty of MK, but NetherRealm went above and beyond with the rest of the game’s features. Of course, you can count on the de-facto online and local multiplayer, training (including fatality training), and the traditional ladder mode from the old MK games (along with individual endings for each character). There’s also a 300 level challenge tower, giving your fighter a different handicap (like no arms) or goal (don’t get hit for 15 seconds) for each battle or challenge. In a nice touch these also include the test your might, sight, strike, and luck minigames. Tag battles are also included and the gameplay has been designed around them so that tag battles don’t feel like throwaway feature. Tag battles are available for solo players or up to 4 players at a time. As if that wasn’t enough on its own, each mode offers the chance to earn coins for use in the krypt where you can unlock alternative outfits, fatalities, and concept art/music.

I never expected Mortal Kombat to overwhelm me with multiple ways to play the game. Fighting games have always weekend projects or games I only pull out when a worthy opponent stops by so there has never been a reason to keep playing or having fun while solo. Sure, the experience only gets better in multiplayer and with friends, but to gamers wondering if there was enough to Mortal Kombat to own it inbetween those rare battles, this is the fighting game you’ve been waiting for. For everyone else, this is the definitive Mortal Kombat game and the best fighting game consoles have to offer.