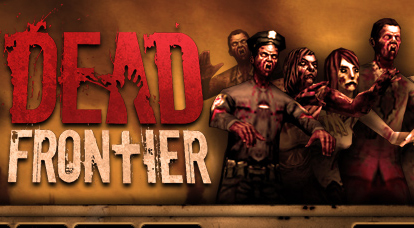 With the release of the Call of Duty: Black Ops new DLC Escalation and its zombie level Call of the Dead having been released yesterday, the zombie craze that just won’t die is back and strong as ever (pun intended).  For those of you that own a PS3, don’t have $15.00  or just want to shoot zombies for free, Dead Frontier may have what you need to scratch that undead itch and prepare you for the inevitable day when the world’s nightmares (and my dreams) become reality.

Dead Frontier is a free to play zombie MMO that tasks the player with exploring a zombie infested world, scouring decrepit ruins for supplies and making friends (or enemies) with other survivors who’re doing their best to maintain a smile through the darkness of an undead uprising. Like a lot of free to play MMOs, Dead Frontier allows players to make microtransactions (in the form of credits or membership plans) that can be used to purchase shinier more useful in-game items (such as guns, armor and fashi0nable hats). So depending on how awesome you want to be in the game will drive how much you’re willing to spend, but a variety of credit packages gives all levels of players options across the board. 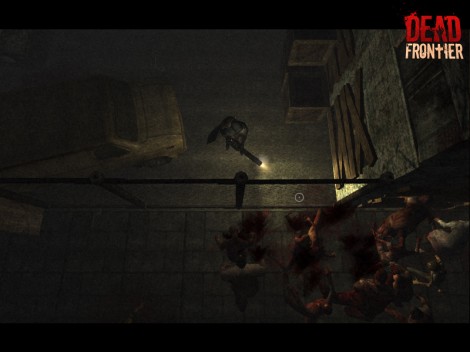 Not exactly a happy go lucky view of the zombie apocalypse

Graphics are relatively simple, but it’s a browser game so that being stated, the game looks solid. The mood is dark and gritty with every zombie encounter being nerve wracking and at times brutal (especially in the beginning when your skills are low and ammo is in short supply). Zombies react to sound, so while shooting them may seem safer, it tends to attract others, which can be a problem if you’re armed solely with a pen knife and charisma (charisma means nothing to zombies, they aren’t known for handing out congeniality awards).  Since the arrival of Left 4 Dead and Resident Evil, zombies have been coming in all sorts of flavors and the same can be said for Dead Frontier. Expect your run of the mill Romero zombies, your running zombies and zombies that have mutated into forms that defy nature (these are the same zombies that always have to have the newest gear and tend to one up their friends).

Controls are simple and utilize the keyboard for movement and the mouse to aim and fire, along with hot keys for searching items, bringing up inventories, etc. Again, simplicity is the running theme in this game.

When starting your character, you can pick from a number of different occupations that each have accompanying skills or attribute enhancements (teachers gain experience faster, engineers can fix armor, and dancers* mystify zombies with their hips). As you increase levels, you’re able to put points into these stats and also into your proficiency with the assortment of weapons available in the game (the usual pistols, machine guns and rifles that gamers are familiar with). The system is not overly complicated so casual questers can enjoy the game as much as the most dedicated MMO fanatic (though there is no magic so fantasy fiends need not apply). 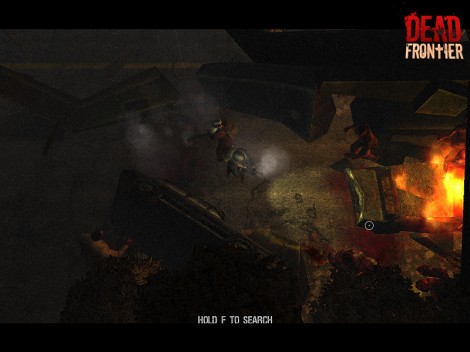 The game itself is divided into the infested zombie city and an outpost where you’re able to buy new equipment, store your items and even compete in combat arenas. The outposts are safe, but at times will come under attack and require players to do their best to protect their homebase from the hordes of undead.

If anything, Dead Frontier is a great game to play during a slow day at work and while it may not have the depth of  World of Warcraft or Rift, it’s community and gameplay are enough to foster a love for MMOs in those that have yet to test those super addictive waters.  Just remember to tell them Wizardtrain187 sent you and they’ll know you’re cool (and I’ll get an in game cash award – what can I say, I’m a whore).

*There is not a dancer profession in the game but there should be, I feel a bit alienated.