It’s time for a bit of a history lesson about one of the model video game companies in the industry, Blizzard. The retrospective video (which you can watch here) is quite long, but if you are a fan of gaming and more specifically, Blizzard, you will definitely enjoy it. Told from the perspectives of the founders and original employees , the video takes a look back at the formation of Blizzard in the early 1990’s.

If you weren’t aware of Blizzard’s history, it was originally called Silicon & Synapse and made Super Nintendo games like Rock ‘n Roll Racing and The Lost Vikings before moving on to its more famous franchises. 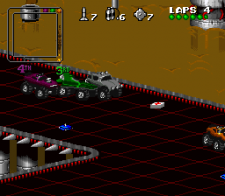 Even though I haven’t played a Blizzard game since Warcraft III, I still respect it as a company and can appreciate the games it makes. Even though I hate on World of Warcraft, I can’t hate on Blizzard. That is…until it starts doing anything remotely like Activision. Take some time out of your day to learn even more about the history of Blizzard and laugh at some of the more ridiculous things the employees came up with along the way.