When I imagine the places where games take shape, I see cramped office spaces, bad lighting and trash cans full of candy bar wrappers and empty energy drinks. Sarah Northway, creator of the Flash zombie apocalypse sim Rebuild, tends to think outside the box, or better yet outside the country. After the success of her husband Colin’s game Fantastic Contraption, the Northways decided to sell everything, leave their jobs and write games full time while traveling the globe. With nothing but laptops and their love for games, these two developers have visited Turkey, The Czech Republic, Italy, Malta, Scotland, France, Honduras, and Costa Rica all the while blogging about their travels and working on their next big hit. 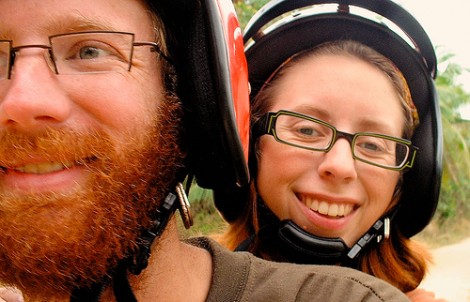 In between programming Sarah and her man take a quick jaunt through a freaking jungle!

Being a huge fan of Rebuild (let’s just say my intense dedication to rebuilding my survivor’s society prevented me from leaving my couch for an entire weekend) I decided to have a chat with Sarah and find out where the idea came from, what we can expect from Rebuild 2 and most importantly what it’s like to have the perfect job.

Horrible Night (Ethan): I’m always curious to find out how people got into gaming, but everyone asks that so instead I’ll ask you this: what would the world be like if gaming never existed?

Sarah Northway: How could I have gotten through adolescence without video games?? I used to stay up every night playing Civilization, Sim City, Might and Magic. I’m talking all my free time between the ages of 10 and 15, which is like 5,000, maybe 10,000 hours. If I’d spent it studying I could be a genius astrophysicist, or a dot com millionaire, or a famous sci-fi author. But realistically… I probably would have spent that time hanging out at the mall and wouldn’t have much to show for it now. 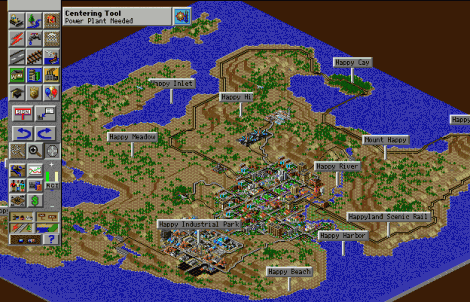 Sim City was great, but it would have benefited from a zombie threat

HN: I will assume that you and your husband are gamers yourselves, and if so what games do you play and do you play together or do you even have time with all the traveling, creating and general badassery that I imagine your life is full of?

SN: Since I stopped working for other people, I don’t feel the need to binge on games anymore, like the time I called in sick all week to play Oblivion. Instead I’m buying more indie and casual games, and Colin and I play strategy games together like Civ 5 and recently Fate of the World.

HN: Do you have a desire to settle down and work for one of the big gaming companies or is the independent scene more your style? Why?

SN: I have an aversion to crunching and corporate culture so I’ve never been interested in big companies like EA or Ubisoft. But I had a great time working for Three Rings Design who make MMOs like Puzzle Pirates and Spiral Knights, and I’d do that again if the travel bug wears off. I liked having so much creative freedom, the flexible schedules, and I was proud to have a part in such innovative games.

HN: I discovered your work through Rebuild on Armor Games but are there other projects you’ve worked on and if so where can we find them?

SN: Not a lot that I’ve finished and published (this is a good lesson for game makers: finish things!), but I’ve made some toys and things for the virtual world Whirled, including a Flash card game called Laws and Disorder.

HN: For people who have not played Rebuild, can you describe the idea behind the game?

SN: I sometimes refer to it as “Zombie Sim City”, but that sounds cooler than it really is. Rebuild is a strategy game where you reclaim a city piece by piece from the zombies that have overrun it. You manage the city at a high level, sending survivors off to scavenge for food or kill zombies or build walls, and every building does something different (farms, schools, hospitals, etc). 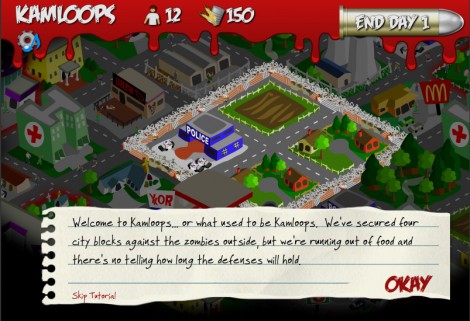 Things start off pretty dire in Rebuild...don't expect them to improve very quickly

HN: What was the development process like for Rebuild? Did you have help and if not would you want it for future iterations of the series or other titles?

SN: I wrote a 2-day version of the game as a proof of concept then spent three months expanding it, adding story and art and balancing the numbers. I did everything myself except the stock music, but I’m kind of crap at art so that took an incredibly long time. I’m going to get help from an artist for the sequel.

HN: Zombies are definitely in vogue right now, but if they weren’t, what monster do you think could replace them in Rebuild?

SN: Any kind of post-apocalyptic setting could work, so it could be nuclear winter and marauding cannibals like in that movie The Road. Zombies are good for games because they are dumb and endless, so you don’t need a sophisticated AI to control their behavior and you don’t have to explain their motivation. Hive-minded bug aliens would work too but they lack the romantic horror and awesome movie selection of the walking dead. 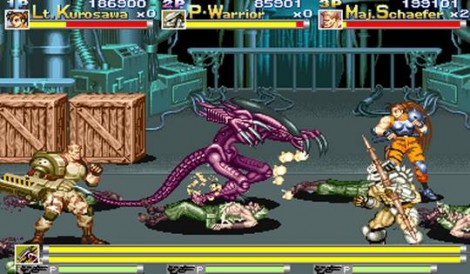 HN: Rebuild and The Walking Dead have a similar background narrative in the sense that the zombies are only one part of a larger survival equation (internal conflicts, food, infrastructure, etc) as opposed to being the main focus. Was that intentional as a means of separating this game from others or did game play mechanics just flow in that direction?

SN: I’m more a fan of post-apocalyptic survival than of zombies in particular, so that was at the heart of the game concept. I also love stories of social microcosms like Lord of the Flies and wanted to give you the feeling of trying to hold civilization together amid chaos. The game pretty much popped into my head fully formed, it seemed so simple I wondered if someone had done it already.

HN: When society crumbles under the weight of the zombie apocalypse, what is your strategy for survival?

SN: Find an office high up in the commercial district with stockpiled food & water, board it up and just hide out quietly for the first month. Then watch for signs of organized activity, find whoever has the guns and barricades and join up with them. The problem is, I’d have no useful skills, so I’d either have to learn one fast (trauma surgery for dummies) or lie and say I’m a power plant engineer and just hope it never comes up.

HN: You mentioned Rebuild 2 on your website and it seems like you’re very interested in fan reception and their ideas for the sequel. What is the best idea you received from feedback, what was the worst and what was the strangest? 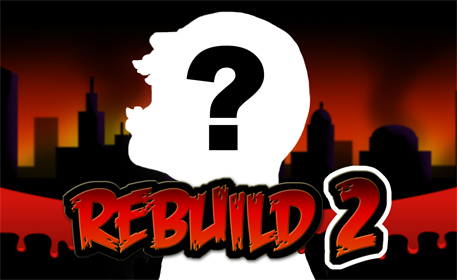 Got ideas? Maybe they'll end up in the sequel.

SN: The most useful ideas are the simple ones, like suggestions for new buildings (prison, factory, supermarket, airport). The single worst and also strangest suggestion was a 5 page re-imagining of Rebuild as a massively multiplayer real time first person tactical shooter. In your dreams guy (and mine too).

HN: Could you maybe put in a secret character named Ethan Moses in your next game and if so will you make sure he has a sweet American flag headband?

SN: Mohawk? Mutton chops? Maybe he’ll be a deserter from the Last Judgement biker gang. I’ll see what I can do.

HN: Can we expect a sequel that’s similar to the first or do you want to expand the game play or even change it all together?

SN: It’s going to be pretty similar to the original, just better art and more of the ideas I wanted to put into the first game but didn’t have time for.

HN: Is the Rebuild series your only focus at this point or are there other games you’re wanting to create?

SN: I wrote a second game between finishing Rebuild and starting on Rebuild 2. It’s a digging/anagramming hybrid called Word Up Dog (yes, you play a dog who speaks in hip-hop lingo). It should be coming out on Armor Games and Kongregate in May. I’m not expecting it to take the Flash world by storm (it is a word game after all) but it was fun to write and refreshing to have a break from the horror of the zombiepocalypse. 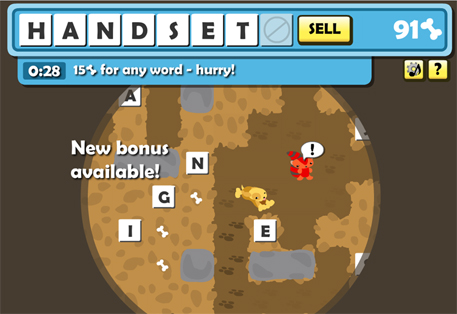 Word Up Dog or Word Up Dawg?

HN: Do you have any plans for games finding their way onto Xbox Live, PS3 or another paid service?

SN: Not for the sequel, and probably not ever unless I find a partner with XBLA/PSN/Steam experience. More likely I might port it to mobile platforms like iPhone/iPad and Android, or find some way to monetize a Flash version.

HN: I appreciate you taking the time for this interview. Aside for polarizing political or religious shout outs, is there anything awesome you’d like to say as a closer? (Feel free to check the box next to “Flick your cigarette into a pile of gasoline barrels while putting on shades and slowly walking away. Doves are optional)

SN: I’m so not that cool. More like, “glances furtively around the room, stuffs eight packages of ramen noodles and three cans of peaches into her bag, then scurries out”. Thanks for the interview, this was fun to do!

If you’re a fan of zombies, sim games or are just overly cautious about worst case scenario preparation try out Sarah’s game Rebuild on Armor Games

4 Comments → Can Develop, Does Travel: An Interview with Rebuild Creator Sarah Northway