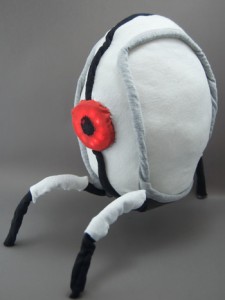 Since it had been years since I had last played Portal, I had forgotten about the little touches that make that game so damn entertaining. A big part of those little touches was the personality given to the lovable turrets in the testing facility. They seem so innocent when they are shooting you, that you almost feel bad to put them down, but of course just as guilt sets in they remind you that they aren’t mad at you for what you’ve done. Thanks, turret.

So how do you make a turrent even more lovable? Jonathan Guberman took on this task and converted the memorable character to plushie form. Of course, he went ahead and included all of those adorable quips. You can protect my house any day, lil lady.