Games have grown up and they’ve gotten complex, they’ve drawn us in, they’ve made us react emotionally and let us relate to characters, occasionally as well as any J.M. Barrie or C.S. Lewis created…but some of those games just don’t belong in the hands of kids, so the problem arose – what to do? 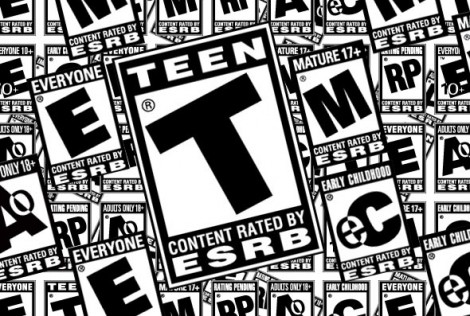 Better than our brothers

There’s an undercurrent out there among the non-gamers of the world that video games are the express realm of children and teenagers and, as such, the existence of anything approaching mature content is inappropriate and shouldn’t exist. I’d happily call those people idiots, but that would be an insult to the idiots of the world. Video games have become an art form, a storytelling medium, psychological experiment, social scene and leisure activity across age groups. Regardless how happy the would-be censors of the world are about it, the ship has sailed on keeping video games a kids-only realm. Unfortunately, when a medium “grows up,” it gets more responsibility, just like a person. It happened with movies and it happened with music and finally it happened to video games – because there are things out there that aren’t appropriate for children, the video game industry was told by Congress that if it didn’t want to be regulated, it had two options: go back to one-size-fits-all vanilla where all games were appropriate for everyone, or regulate itself. Thus was born the Entertainment Software Ratings Board (ESRB) that gives us our “E for Everyone” and “M for Mature Audiences” ratings on our games and writes up synopses on why games are rated the way they are.  Retailers instructed their employees that they were to follow the age-related guidelines regarding the sale of video games. Still, the industry as a whole has faced some pretty harsh criticism for some of the games it has produced even following the ESRB’s creation and almost all of it has been under the banner, “Think of the chiiiildren,” a banner that we fly…without the paternalistic and patronizing attitude seen from some would-be censors.

Overseeing and tasked with the protection of U.S. consumers is The Federal Trade Commission (FTC). Part of its duties include issuing a report to Congress on an annual basis to let it know how well the compromise is working in keeping adult-geared material out of the hands of kids. Unlike, say, the IRS, the FTC gets all of its data in a really, really sneaky way: it sends in undercover 13-to-16 year olds to try to get retailers to sell them media they’re not supposed to get their delicate, underaged little hands on: R-rated movies, R-rated DVD’s, “Explicit” CDs and M-rated games. The FTC’s been keeping data on the self-regulated game ratings’ efficacy since 2000. The results for 2010 are in and, responsible gamers who want a world where both Resistance 2 and Kirby exist in beautiful, age appropriate harmony? The news is good. 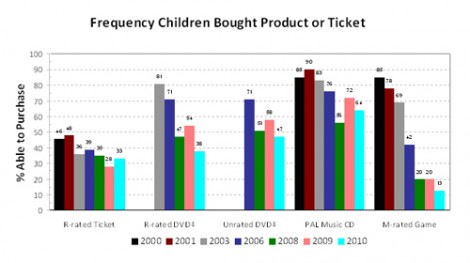 In 2000, 95% of the undercover “agents” were able to buy M-rated games. In 2009, the number was 20% and in 2010, responsible game sales took the gold with a 13% rate – lower than movie theaters (33%), DVDs (38%) and music CDs (64%). You can find the entire breakdown here, but notable were Target (8%) and Wal-Mart (20%) at either end of the spectrum. The summary data may not be as interesting to everyone, but they point out something important to us here at Horrible Night – the self-regulation of the industry is working, the hyperbole surrounding kids’ exposure to age-inappropriate material is nothing but a series of Phillippics and, maybe most importantly, retailers are doing their part to make sure that adult-oriented games only end up in adult hands.

The system is working

Despite the fact that the ESRB runs a pretty great website (for a ratings board, anyway) that is a great resource for parents, we all know that:

…so it’s pretty great to see that the retailers are taking up the slack and doing such a good job (no, not you, Wal-Mart) keeping parents of 6 year-olds everywhere from explaining to school principals how their children learned the word, “Dicktits.” It’s up to each family to decide what’s appropriate for their children whether its in books or music or movies or games and I think that the ESRB does a better job of allowing parents to make that assessment by providing them with clear guidance and detailed information on the ratings. Still, it’s a great defense to criticism (and just darn nice to see) that the Target Electronics Desk, GameStop and Best Buy clerks across the country (who are probably largely gamers themselves) seem to be taking the responsibility of only selling age-appropriate games to those of the appropriate age… although now I wonder how it is someone let JDevL buy a Kirby game. Talk about age-inappropriate.