When Portal was released as part of the Orange Box compilation in 2007, the average gamer didn’t quite know what to expect. Sure, everyone had read the previews and early reviews of the game, but would a first person shooter/puzzle game conglomeration actually be fun? After a brief flirtation with the Mac version when new Steam subscribers using OS-X got it for free, I finally bought it on Xbox Live Arcade, I can now answer that question: Yes, Portal is fun…but more importantly, it is a great game worthy of the praise it has received and will keep on receiving. 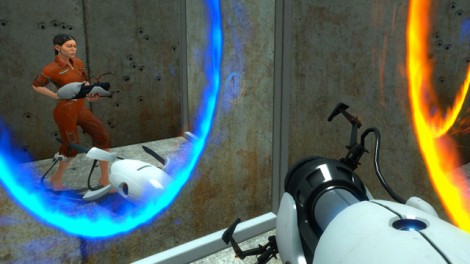 In many instances, going back to play a 4 year-old game would mean struggling through old video game tropes that the industry has long since moved past. That was absolutely not the case when I fired up Portal. Rarely do I go back to an older game that I’ve never played and find very little wrong with it. We’ve been discussing Eternal Darkness here on the site recently, which I’d like to go back and play…but I’m afraid that the game play would ruin the rest of the experience for me. Granted, that is a game from the last generation of consoles, but at the same time, my experience with Portal was never a disappointment.

Keep Trying Until You Run Out of Cake

In Portal you take on the role of Chell, a silent protagonist  being forced to traverse a series of obstacle-filled rooms that require intuitive thinking and the Aperture Science Handheld Portal Device (ASHPD or portal gun). Challenged by the often hilarious AI GLaDOS (Genetic Lifeform and Disk Operating System), Chell uses the gun to shoot portals on flat planes to successfully complete each challenge room. The portal gun allows Chell to shoot two interconnected portals: a blue and an orange one. For example, you shoot the blue portal on a far wall that you can’t reach by any other means and the orange one on the floor in front of you. When Chell “falls” through the floor, she will wind up coming out of the blue portal on that far wall.

Unless you are rookie to the first person shooter genre, there is a very little learning curve to Portal. 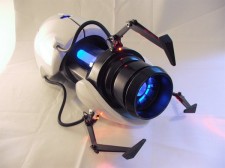 Yes, someone made this. It's a shame it doesn't work.

In fact, Portal might be a good place to get your feet wet in the FPS genre. As you start in the test chambers, you gain valuable skills that will help you later on in the game. What is nice about Portal is that you have no real restrictions on how long you take to finish each level. If you are struggling to find the solution, take your time and take some chances! There are multiple ways you can use the portal gun to succeed. Finding out what works best for you and honing that method is part of the fun of the game. Pretty soon, you’ll able to challenge the fastest speedrun times out there.

By tying the game into the Half-Life universe (the Black Mesa Research Facility is a competitor to Aperture Science), the small development team at Valve was able to use many of the same art assets in Portal, which is one of the reasons why it was released in the Orange Box (a Half-Life compilation). Despite the game being 4 years old, the graphics still hold up. It’s not the prettiest game in the world, but it doesn’t have to be. On the Xbox 360 the frame rate is constant and that’s one of the most important aspects of a first person shooter.

Throughout my time with the game, I sometimes found the continuous shooting of portals confusing…but I do not blame Portal for that. It was my own fault that I couldn’t remember which portal I had used to reach my destination. While at times, tracking which portal was where could be frustrating and made me feel stuck, the puzzles were more intuitive than another great puzzle game, Braid. My only complaint (and that complaint is very, very minor.  Minuscule, really) is that the game is short, but that has been the complaint of all of Portal‘s most ardent supporters as well. It’s not that I don’t think there isn’t much value to the experience or that I should have more game for the price I paid, though. It definitely comes down to greed/the fact that I wanted to play more Portal. A lot more. Now that Portal 2 is out I have the chance, but I guess I should wait four years until I finally play it. Yeah, that’s not going to happen.

To put it simply: Portal holds its own even in the face of the technological advancements the video game industry has made in the 4 years since its release. That is an amazing achievement. Rarely do I want to play, let alone finish, games that came out 4 years ago. If you have been away from video games for a while or you’re just an idiot like me and haven’t played Portal, this is a game you need to play. It’s not super difficult and the controls are tight and simple. I prefer to play with a game pad, but Portal is also available on PC and Mac if a keyboard and mouse are more your style. Everybody should play this game. If that doesn’t convince you, then maybe a college course featuring the game will. Portal is one of the greatest games I have ever played and I hate myself a little for not playing it before now.