Monster Hunter Tri is the latest game in the RPG/MMO adventure series by Capcom that has quite literally taken over Japan. You are a hunter who sets out to gather resources, explore the world, and take down the biggest monsters that you can find. You, alone or with online with a group of hunters, will encounter unique monsters across many landscapes. The game pushes you to learn the habits of each monster so that you bring the right strategy and equipment to bring them down. This is the first of the series to be released on the Wii, and Capcom’s biggest effort yet to make Monster Hunter a significant in the west and Europe. The game is subscription based in Japan, but we will be getting additional content for free as it is released. 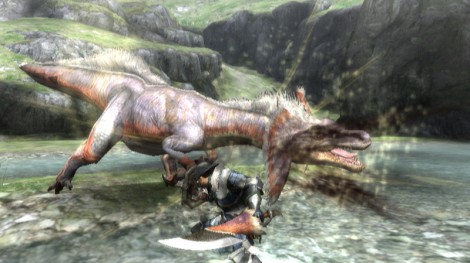 After doing a lot of research on Monster Hunter and deciding to give it a try, I knew my biggest barrier of entry to any established RPG series would be just feeling comfortable in the world. After a nonsensical intro movie, I talked to a few NPCs and got my bearings. I’m the only hunter in the village and they recently had an earthquake, so it’s my job to go out into the world to gather resources for the village. These gathering missions serve as the tutorial missions and walk you through your individual skills while unveiling one core gameplay feature at a time. After you get through the intro missions, official guild quests starting coming in from all over. The guild quests have you performing specific kill, gather, or capture tasks within a time limit . Quests take place in a variety of locations and with each new quest you have a chance of encountering a brand new monster. At any point, you can return to the opening area to casually hunt and gather, or redo guild quests to raise money, resources, or equipment for your character. 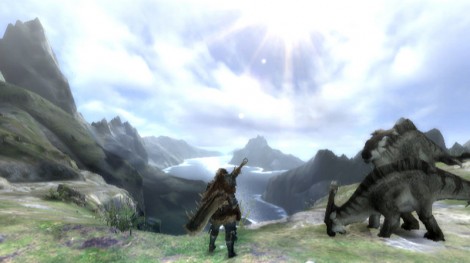 You said this was on the Wii?

What addictions are made of

Monster Hunter Tri comes with some very addicting qualities that I have fallen victim to in the past, namely the rewarding sense of exploration and the building of gear for your character. The exploration of the separate lands feels very much like stepping back into World of Warcraft for the first time. There is this giant world at your disposal where every new area will appeal to your sense of discovery. Most players are going to be driven to explore new areas in hopes of the exhilaration that comes with running into a gigantic monster that you have not seen before. The game is not afraid to throw these beasts at you early without giving you knowledge of how to fight them. I suggest running from these first encounters, if merely to see the look of fear in your characters face/run. However, after the first half-of-a-dozen monster reveals, you quickly buy into the gotta-kill-em-all mentality that permeates this game. The gear doesn’t drop like traditional MMO’s or the Diablo series, but the loot lust is still quite thick in this one. Gear can be bought at shops and enhanced or forged with the many resources that you gather during your hunts. You gather resources from various plants, bone piles, mineral deposits, and from the carcasses of your kills. Resources are combined in endless ways to create everything from ammo and potions to traps and decorations. What you choose to make will determine the ways you hunt, until you run into a large monster that forces you to use your resources to hunt in a completely different way.

The first thing that strikes you when you start Monster Hunter Tri is that the graphics are extremely well done, for a Wii game. Capcom’s work is impressive (even to Nintendo) and it’s easily one of the best looking games on the console.  The monster sounds and environments work well together to pull you into the adventure, and it’s fun to try and dissect the monster noises to hear how the engineers pulled them together (was that a seal?). It makes you wonder what this game could have looked like on the Xbox 360 or PS3. Hopefully, Capcom’s strategy to go after the larger user base of the Wii pays off, because this really is a stand out effort for them.

Swim the other way

The one gripe that I’ve read about, but haven’t had much of an issue with, is the controls. Your hunter controls similarly to the 3D Legend of Zelda games except for the fact that there is no targeting/locking-on to enemies. It does take a bit to get used to, but I found I was learning so many other features at the beginning of the game that I adapted to the controls during the training missions just like everything else. The underwater combat felt natural by the time you are thrown into it, and no one likes underwater sequences. I do have to recommend getting the Wii Classic Controller Pro as the WiiMote seems to have an even steeper learning curve.

I’ve made a huge mistake

I tried to stay away from Monster Hunter Tri as best I could, but I was just too curious. I had the feeling that the game was going to feel like a mix of WoW and Zelda, and facing that fact is harder to deal with than I originally thought. Just mere days after giving in to purchasing the game, and I can safely say that I am worried about being able to focus on any new releases for a while. So… anyone want to try multiplayer with me?

Reflex Status – I’ve spent about 8 hours in the single player portion of this game, and there is absolutely no end in site. I will be coming back to this for a while, but my purchase has already been justified.