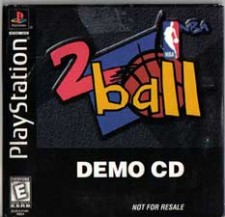 You might have read my post about the awesome free demo that was handed out at the 1998 All-Star game. 2Ball never turned out to be a successful event during All-Star Weekend. In fact the demo probably made more for the NBA in terms of licensing than the actual event did.

Some ingenious entrepreneur, trying to capitalize on the recent trend of selling rare and otherwise unexceptional games for a huge sum of money, put the game on eBay. Well, it sold. For $710 freaking dollars!

Here’s some of the stuff that person could have bought with that $710 (not including tax):

As you can see that $710 could have gotten someone a lot more than a horrible demo handed out at an NBA All-Star Game 12 years ago. Now all he has to do is flip it and buy this.