When I was younger, there was a house outside of town that my dad took me to see. It was this old run down house, but you could tell that it was beautiful in its day. As I got older and into high school, my friends all talked about the house and how it was haunted. There was some story made up about a few murders taking place there, but it was mostly just urban legend. Some of my friends even went into the house, but that was something I was never going to do thanks to the lessons I learned from The 7th Guest.

The Lessons of The 7th Guest

Do not buy a doll from this man.

Never buy a doll from a man named Stauf

I learned something today. I was walking through town and saw this new toy store called Stauf’s had just opened up. My cousin just had a baby so I was thinking I should take a look inside and see if there was anything worth getting. The owner walked up to me and asked me to take a look at his dolls. He had meticulously carved each one and was trying to build a name for himself with the quality of dolls he created. Not being a particularly big fan of dolls, I still gave him a chance and bought one. Because I’m lazy, I forgot to send the doll right away, but shortly after bringing it home, I came down with a virus. Lucky for me I am strong of will and I survived. Though the dolls he did sell, those children had a different fate. Thank goodness I didn’t send the doll off to my cousin. Thanks, The 7th Guest. 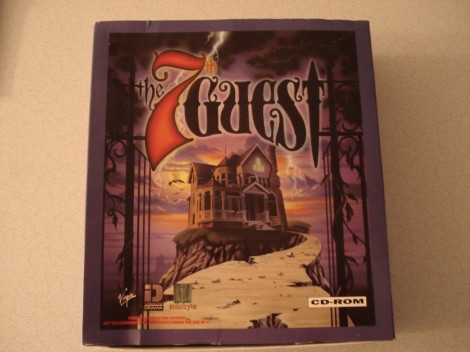 I still have the box to help me make better decisions.

Always decline the invitation to stay at a creepy mansion

I learned something today. I went down to check the mail and I got something in a fancy envelope addressed to me. Because I rarely get anything addressed to me in fancy envelopes I was intrigued. I got my trusty letter opener and carefully lifted the wax it was sealed with. It read, “Dearest Sir, You are cordially invited to stay at my mansion Friday, May 13th. You should arrive by 7 p.m. with the other 6 guests. There will be plenty of food and beverages.” As enthralled as I was to be able to party in a mansion with 6 other people, I quickly tore up the invitation and threw it in the garbage. You see, it takes 7 souls to complete a pact with an evil supernatural entity. I have enough problems in my life without becoming someone else’s sacrifice. Thanks, The 7th Guest.

If tombstones show up on a cake, don’t eat it

Not the most appetizing thing.

I learned something today. It was a co-worker’s birthday and they brought in some cake to share with the rest of the staff. Cake is something I’m really fond of and I’m usually prepared to dive right in. However, this cake was different. I took my break before everyone else so I was the first to get a crack at the cake. As I walked into the room, tombstones of different shapes and sizes appeared to grow right out of the icing. Needles to say, I bolted. I was not about to solve a damn puzzle just for a piece of cake again. That, and the fact that tombstones always seem to chip my teeth. Thanks, The 7th Guest.

If you see ghosts, run

I learned something today. Even though I declined the invitation above, I did go to another haunted house recently. Obviously, I didn’t stay the night because I’m too scared to do something crazy like that. But while I was in this house I walked into a bedroom and saw a pair of ghosts participating in the act of love. The male ghost said he was worried about his wife catching them, because she was sleeping in another room of the house. The female ghost reached up and pulled his head close to hers for a passionate kiss. As interested as I was in watching some ghost porn play out right before my eyes, I took off running. Being in the same room as adulterous ghosts can only lead to discovering a truth about yourself you may not want to know. Thanks, The 7th Guest. 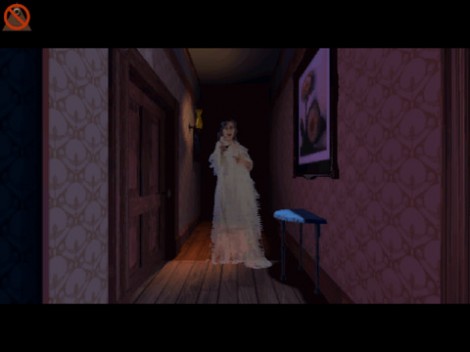 Beckoning ghosts are hard to say no to. That's why I run.

As much as I like watching those ghost hunting shows on television, I don’t have the testicular fortitude to pursue it in real life. If I did, I’d probably just find out that I was once a part of a sinister plot of absolute evil and stuck in a never ending loop trying to discover the actual events that led me to this point in my life. Thanks, video games.