What happens when you distill a fantasy game down to its very bones? You are left with a hero, a conflict, a quest, an enemy, and a will to move forward. Now what if you take those elements and add a gorgeous pixel art style, an amazingly immersive soundtrack, and an extremely minimalist story that gives you exactly what you need and nothing you don’t? If you combine these elements you end up with the amazing synesthetic experience that is Superbrothers: Sword & Sworcery EP. 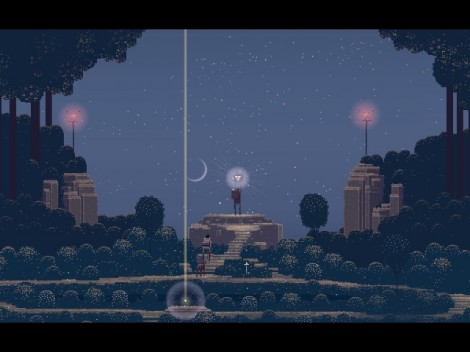 Many times when a game is classified as an “art” game, it’s hard to know what to expect. Will it be a pretty veneer over a non-existent story? Will it be a deep journey that’s a pain to look at for more than five minutes without having a seizure? Maybe there’s not really a game to it at all, maybe it’s more of a music visualizer, or even an slightly interactive book. None of those worries apply here. S:S&S EP is all game, and is a trip for all of your senses. Well, maybe not taste, as your iPad has all that… finger grease all over it. But seriously, all grubby fingered references aside, let’s get into what makes this game shine.

As Superbrothers describes it, Sword and Sworcery is “The Archetypical Videogame Adventure.” You are The Scythian, a powerful female warrior on a journey to avenge your people. In search of the mythical Megatome, and a bizarro representation/parody of the Hyrulian Triforce you will encounter loyal companions like a girl called Girl, a lumberjack named Logfella, as well as your trusty steed, Dogfella. You will use sight, sound, and touch, to navigate, explore, and manipulate this beautiful fantasy realm of earthly and celestial mysteries. 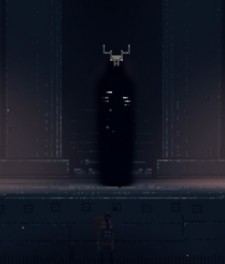 The first thing you’ll undoubtedly notice about S:S&S EP is the incredibly stylized graphics of the game. The style of the game is almost difficult to describe, as even though it’s designed in a pixelized fashion, it feels incredibly high-def, with every pixel placed with the care of a renaissance artist. Particles and glows are emitted from various flora and fauna, reflections are remarkably precise, and the phase of the Moon in the sky changes with the actual Moon in real life. All of these attributes combine to make this world feel truly fantastic and alive. Craig (Superbrothers) Adams (a.k.a. @the1console) not only designed this beautiful environment of fantasy and dreams, but filled it with creatures to spark your imagination and drive you deeper into the experience. There are rabbits, stags, three-eyed wolfey things, grizzled boors with an affinity for breakin’ it down (you’ll see…), and large floating skull monsters of doom to haunt your dreams.

Aside from the creatures that live in the game, the characters themselves are just as memorable. While few in number and in pixels, you end up caring for them all a great deal before you reach the end of your quest. The character artwork in S:S&S EP does for the player what a great description of a character in a well-written book does; it gives you the shell of the idea, but lets you fill in the details with whatever your brain can imagine.

Basically, any single frame of this game could be framed and hung with care on any wall of my house. 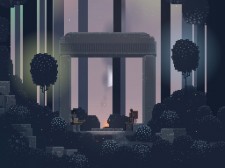 Is that Jim Guthrie?

When a game includes EP in the title, it’s pretty obvious that the music and sound design of the game is going to be paramount to the full experience. Let me say right now that to really experience this game you absolutely have to play it with headphones on. The soul-moving sounds of Canadian musician Jim Guthrie’s soundtrack will draw you into the forest and put you in the mindset of the Scythian. There are also at least a few “Holy Shit!” moments in this game when you realize exactly how much sound is involved in some of the varied puzzles through the game. Also, because once you’ve played S:S&S EP you won’t be able to get the music out of your head, you can now purchase Jim Guthrie’s Sword & Sworcery LP: The Ballad of the Space Babies soundtrack/companion album. I’m actually listening to the album right now as I write this article and it’s hard to believe that a large amount of the music for the game was created with MTV’s Music Generator on an old PSOne (yes, I’m totally serious about that, yes I had that game when I was in seventh grade, and yes it was totally awesome).

This game finally has the correct answer for how an adventure game with touch controls should work. The basic controls are extremely easy to pick up as it’s a double tap on the location you want to go, or just hold your finger down on the ground and your character will walk to it. For battles you rotate the device to a vertical orientation and buttons for your sword and shield appear. Other controls are basically just interacting with the environment in a number of surprising ways that I’ll let you experience for yourself. We’re past the days where all games require crazy controls and steep learning curves. Now, our bodies are becoming controllers and with that shift, control schemes need to become intuitive, and just, make sense. You should be able to pick up a well crafted game and just know what to do, yet still be surprised with the subtleties of how much control you are afforded. S:S&S EP is now officially my benchmark on this new paradigm of controls.

Another interesting experiment in this game is the addition of a “tweet this” button with every piece of amazing dialogue in the game. I found myself spamming all of my followers because the writing is just that good. The writing is humorous, serious, and sarcastic in a way that I really appreciate.

While I could go on for days on each of these individual pieces, the magic is how it all comes together. When you play this game everything just melds together into an immersive, fun, adventure that you won’t want to put down. I can easily give this game 5 out of 5 which I don’t do very often. It did exactly what I like a great game to do; to take me out of reality for and let me be the hero of a great adventure while indulging my senses without overpowering them. If you own an iPad, go buy this game right now as it’s worth much more than the price of admission. If you have an iPhone or iPod touch, be happy in knowing that a version of S:S&S EP will be out for you very soon. And if you have any way of listening to music at all, go get the companion album and hear the Songs of #Sworcery.

**UPDATE!!** – S:S&S EP is now available for iPhone and iPod Touch as well! There is both a “micro” version only for the phone and touch, and if you already bought the iPad version, just update it and you’ll get the universal version that will run on both your iPad and smaller iOS device! 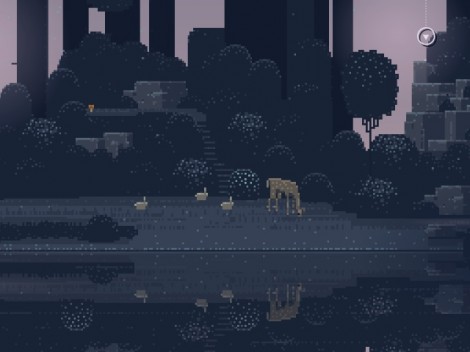 It IS the rabbit!

2 Comments → Superbrothers: Sword & Sworcery EP Review: It is a Time of Miracles