Remember that awesome Mortal Kombat video we all salivated over a few months ago? The original thought was that it was created as a hype machine for the next Mortal Kombat but that was an incorrect assumption. However, the outpouring of support and exclamations of awesomeness that followed, led Warner Brothers to commission the miniseries with a Dark Knight sensibility about it.

I am extremely excited for this series. Nothing has been done quite like this series and for it to use a video game as inspiration is something I’d like to see more of. Especially if this turns out as good as the trailer looks. 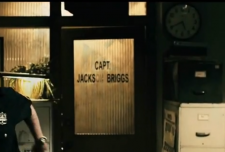 I see what you did there.

We might see a shift in focus in that stupid “transmedia” branding we’ve been hearing about. If this is a success, studios will no longer have to mortgage their future on a big budget action movie based on “insert popular video game franchise.” If they can monetize these videos without being ridiculously greedy, they might be on to something here.

Mortal Kombat: Legacy should hit the internet on April 12 via Machinima.