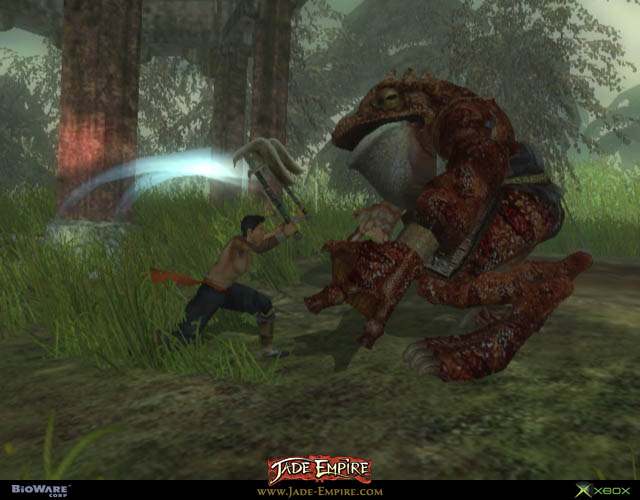 I’ve spent a really disgusting amount of time using your games as an example of how to properly develop a game and an even more absurd amount of time in video game related discussions lauding your work. I don’t want to admit how many hours I’ve plowed into your games or how terrified I was at the concept of picking up Dragon Age II before Mass Effect 3 comes out because our readers and listeners are probably sick of hearing “I’m GiffTor and I looooove BioWare,” by now, but after playing The Arrival DLC for Mass Effect 2, it dawned on me – you’re not perfect. Even now, it pains me to say it, but just taking a step away from my geek-crush in hopes of maintaining journalistic integrity helped me to realize that you’re scarred and yellow eyed just like a Dark Jedi hiding the ravages of channeling the dark side of the Force. Your mind tricks won’t work on me anymore – you are the droids I’ve been looking for!

Inventory Management is SO Middle Kingdom

One thing I’ve never hesitated to praise you about, BioWare, is your dedication to improving your games whether it’s within the game’s life cycle or between one and the next. The thing is, it’s been the better part of a decade since you released Knights of the Old Republic and designing an inventory system that works well and actually provides useful information still seems to be beyond your grasp. You make RPGs that have enough action in them to keep them from sliding into hard-core territory but still maintain an depth plot, tons of side quests and some great customization options. 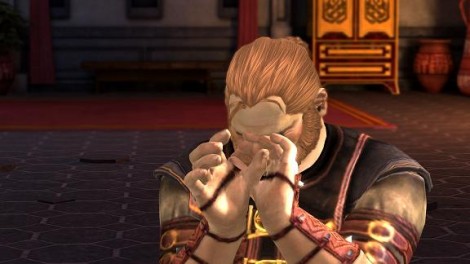 Your games are award winning and popular, so you know you’ve hit the sweet spot, but one trademark of an RPG is that there are items that your character(s) can employ for different effects. You don’t turn out loot-fest item-porn games, but nonetheless, all of your games have given your players the ability to pick and choose between weapons, attire and other stat-boosting gear. The thing of it is, though, that even when you vacillate drunkenly between the limited loot-set of Mass Effect 2 or the blaster-and-crystal frenzy of Knights of the Old Republic, the information that your inventory systems convey to me is about as useful as an unshielded exhaust port on a moon-sized space station. Oooh! It’s a heavy shotgun that fires a single slug instead of multiple pellets! Sweet. Would you mind telling me how it compares to my four other shotguns instead of just telling me that it’s weak against shields?

If your games are supposed to be about choice, let me make an informed decision when I’m picking between a plasma shotgun and a one-of-a-kind slug-thrower. You say that you did that in Mass Effect but thought it was too complicated? You got rid of deep-weapon customization in favor of resource-gathering in Dragon Age II and Mass Effect 2. I see. That’s great, but being able to make 327,966 different faces (same body type) for Commander Shepard while not being able to decide if I want to stack upgrades on my sniper rifle which will render it useless for 30 seconds but pretty much turn it into a rocket launcher seems to be a strange restriction to me. Call of Duty lets gamers do more customization to their rifles than the deep, rich action RPG experience you claim to produce. Bad BioWare! Go to your room and think about the choices you’ve made.

Leadership comes from the front 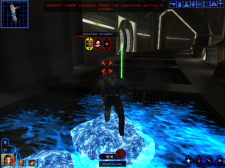 Frenzy? Strike? It's all SOOOOO complicated. Wait. Am I standing on a plasma field? *FZZZZZZZZZZT*

All of your games are supposed to be about “choice.” It’s probably a good thing that your first one was Knights of the Old Republic since George Lucas gave you the mold: light, dark…and if you pick “gray,” you’re screwed. It doesn’t matter whether you call it the “High Path” and the “Low Path” or if it’s being a “Renegade” or a “Paragon,” if it’s a BioWare game, it’s got some sort of ethics-meter that’s going to have an impact on how NPCs interact with you and maybe, just maybe (SARCASTIC SPOILER ALERT) how the game turns out. Before we move on to how this entire system is a sham, let me burst one of your bubbles, BioWare: the idea? Even if we don’t track it back to Dr. Indiana Jones and Han Solo himself, I have to wonder…have you played Deus Ex? Did Eidos make fun of you for taking their idea and not doing as good a job of it as they did? Ten years after it came out? Just checking. Because I would be embarrassed if I were in your shoes.

Now, let’s discuss how hierarchies work. There’s this person at the top of a TO&E called a leader or commander. They come up with the ideas and the vision and sometimes the plan and down below them is the team helps them make it happen. Their tone and attitude can heavily affect the team’s attitude and create an institutional ethos. Two teams with two different leaders may both be equally successful despite the fact that one leader/team is laid back and seems to pull everything together at the last minute and the other is by the book and very, very serious.

I’m hoping you’re taking notes because this entire phenomenon seems foreign to you – whether I’m playing as an ass-hat or Prince-friggin’-charming, my team has the same dialog to NPCs and each other regardless of the institutional ethic I’ve built up. In 2003 on the original XBox, there wouldn’t have been any reason to complain about the fact that my team had canned dialog that didn’t change based upon my actions, but, gee, it’s 2011 and when my Hawke is a bloodthirsty bastard, it’d be nice if the rest of my compatriots adopted the same berserker ways instead of, oh, I dunno, wearing delicate lingerie? If you want to know how to do this well, go back to 2004 and ask Obsidian Entertainment – they paid attention to your gaffe and fixed it in Knights of the Old Republic 2, even if they did drop the ball with Alpha Protocol.

I will grant you intergalactic physical pleasure, but you will never see my face.

Nevermind. Seriously. I can’t do it anymore. Either I’m too much of a fanboy to remain objective or your games really are that good. Sure, you’ve got some pacing problems and your DLC isn’t always as A+ as your main titles, but you’re the anal-retentive type-A guys who constantly tweak their games to make them work better for your fans. Everything I’ve read about the upcoming Mass Effect 3 seems to be saying that you’ve already thought of all of my gripes, you think you’ve found a sweet spot between hard-core RPG and squad-based action/shooter…and I believe you.  You may follow the adventure-story formula characters a little closely (can we get one more wookiee–who’s–not–a-wookiee, please?) but that means you can spend time making sure the rest of the game is awesome. You’re my Huckleberry and there’s nothing I can do about it.

PS – I wasn’t kidding, even a little, about the inventory system. The closest you’ve come to good was in Mass Effect and even that wasn’t all that smooth.

PPS – Also: please call up Bungie or maybe even Criterion and ask them how to make driving your vehicles in-game more enjoyable than letting a piece of bamboo slowly force its way through your abdominal cavity as it grows towards the sun like it is in yours.

2 Comments → Mail This: Bio-Worn Out