If you’re like me, you are getting more and more excited about independent development of video games. With Xbox Live Arcade and the PlayStation Network, there are now major outlets for developers to get back to small team development. That is exactly what happened when ex-EA people got together to form Supergiant Games and create the first game in its catalog, Bastion.

In Bastion, you start as a seemingly silent protagonist known only as “The Kid” as he wakes up in a world that has been completely changed by the Calamity. The Calamity was an event prior to the game where the world was split into separate, floating islands. As you begin to control The Kid, the terrain will float up, rebuilding itself in front of you as you begin to walk about. However, not everywhere is safe as some of the ground will crumble beneath your feet as well.

The main goal of the game, and where Bastion gets its name, is the creation of The Bastion. The Bastion was a place people of The Kid’s city decided they would go when something catastrophic happened. The responsibility of its creation lies with The Kid and serves as a hub world during the game. Throughout the game and each of its levels, you’ll find buildings and other collectibles that will help in the creation of The Bastion and expansion of its land mass. Once these buildings are placed, they will provide the Kid with certain services including: weapon crafting, drink brewing, and skill-and-weapon swapping. This style of world hub reminds me a lot of the Dark Cloud series and Legend of Mana, so fans of those games might be really interested in what Bastion has to offer. 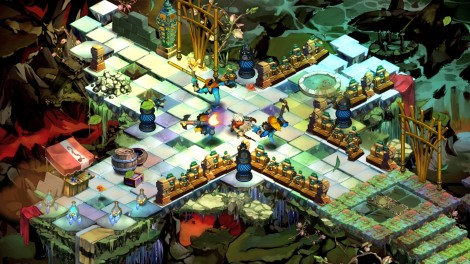 If nothing else, Bastion looks beautiful.

The most interesting thing about Bastion has to be the inclusion of a dynamic narrator. The narrator will describe each action you do as you do it and change based on the player’s reaction or lack thereof. For example, you find an item. In normal games, you might get a piece of text telling you what the item is. In Bastion, the narrator might say “The Kid finds an alloy that will strengthen his hammer.” A little bit more descriptive than a text bubble saying “Titanium Acquired.”

If you’ve played Diablo and more recently Torchlight, you can get an idea of what Bastion will play like. It is an action RPG set on an isometric plane, so Bastion definitely is ripe for comparison to those games. Where Bastion differs from Diablo and Torchlight is that the focus is more on the action and less on the RPG. There are definitely standard RPG tropes like leveling up, but the action is where Bastion shines. 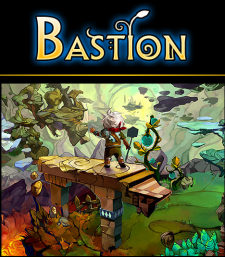 The Kid points the way.

Weapons of all classes and eras will be included, like hammers, guns and bows and arrows. These weapons allow for ranged as well as melee attacks. The ability to roll will allow you to dodge oncoming attacks but can also lead into attacks. The damage the Kid does while rolling or on the move will be less than if standing still and striking but should be useful when surrounded by multiple enemies.

Overall, I am extremely excited about Bastion and the future of Supergiant Games. By all indicators, this will be one of the standout releases of Xbox’s Summer of Arcade promotion and should go onto stamp Supergiant Games into our top indie developer lists.

Developed by Supergiant Games and published by WB Games, Bastion will be released this summer on Xbox Live Arcade.