Way back when, there was a student tech demo project at the DigiPen Institute of Technology that turned into a game.  This game (later) got packed with The Orange Box, which is something that you just NEED to own if you play video games…at all.  The game was called Portal and you didn’t kill anyone (human) and you didn’t carry a gun, yet it appealed to FPS junkies.  It had a quirky, geeky sense of humor with robots and advanced (sci-fi) technology but got positive attention from the Madden crowd.  It had a dystopic feel and a dark plot but it was okay to play with 9 year-old kids.  The single player campaign was short but had a great deal of replayability and the loudest complaint from its fans was, “More!”  It had one of the evillest (sic) bosses ever (the Genetic Lifeform And Disk Operating System or GLADoS), an end-credit song that went (effectively) viral and taught its acolytes that the cake was, in fact, a lie.  And now, Valve, a seminal developer with a penchant for perfection and an ever-growing fan base, has brought it back and the collective anticipatory drooling of gamers across the spectrum is nearly audible (if not particularly sanitary). 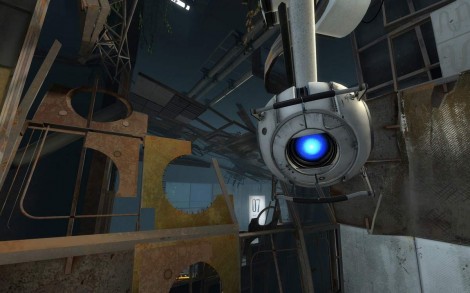 The silent protagonist/human lab rat from Portal, Chell, returns to find GLADoS not only alive, but rebuilding Aperture Science and its twisted puzzle rooms, all the while taking a creepily diplomatic tone with Chell (“We’re a lot alike, you and I. You tested me, I tested you. You killed me, I… oh no, wait… I guess I haven’t killed you yet. Food for thought.”)

Valve could have made Portal 2 with no new advances to the gameplay other than “more,” and its fans probably wouldn’t have complained, but Valve decided to give its consumers their cake and let them eat it too: the Portal gun can now stretch, push, pull and rotate objects and Chell will have propulsion (speed) and repulsion (trampoline) gels to call on as she makes her way from room to room.

In addition to the new tools available to Chell, Portal 2 includes a separate co-op game starring Atlas and P-Body, two Laurel & Hardy-esque robots working their way through much more complex (and lethal) puzzles than their human counterpart.  If the higher difficulty level weren’t enough, each player hears GLADoS whispering in their audio sensors as she tries to sow division between the partnered androids.  Gamers who are experienced with Portal might be concerned about the difficulty of coming up with a plan of attack while playing co-op online, but once again Valve shows why it’s, well…Valve.  Built into the co-op experience is a function allowing players to highlight different areas of interest to their partners, including bringing up a splitscreen window to share one player’s view at the push of a button.

Opening the valve on cross-platform gaming

If it weren’t enough to turn out a AAA title with distinct co-op and single-player campaigns and making sure that playing a co-op puzzle game with a first-person perspective didn’t turn into a shouting match between partners of, “There. No, THERE!  Look, put your damn portal…ugh! I’m dead.  You’re a moron,” Valve went ahead and pulled out all the stops: gamers who buy the PS3, Mac OS X or PC version of the game will be able to play cross-platform.  While PSN’s updates to the PS3 have been a source of frustration, the partial integration of Steamworks into the PS3 version might even function to ameliorate some of those complaints; players will be able to save to the Steam Cloud and swap between the three platforms.  While it doesn’t appear that XBox 360 will be joining the crowd this time around, the fact that Valve has managed to bridge the console/PC (and Mac) gaming-divide with Portal 2 isn’t just another feature to what appears to be a great game, it may be a feature that makes Portal 2 an important game for something beyond its plot, mechanics and graphics.  However, no Valve game would be complete without great graphics, polished mechanics and a plot driven by odd and humorous characters and Portal 2 continues the tradition. 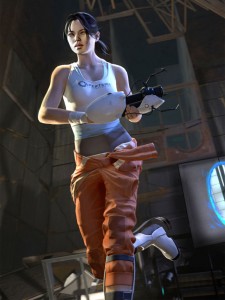 Although there’s no news on whether the Weighted Companion Cube makes a return to keep you company or break your heart, the trademark humor of Valve is definitely going to have a presence – Erik Wolpaw reprises from Portal, Chet Faliszek from Left for Dead 2 and Jay Pinkerton from National Lampoon join him in writing the plot and dialog.  Stephen Merchant (of the U.K. version of The Office and sometimes-writer of the U.S. version)  and J.K. Simmons (The Closer, Jonah Jameson in Spiderman) lend their voice talents as the quirky personality sphere and the disturbed founder of Aperture Science, Cave Johnson, respectively.

After roughly two and a half decades of gaming, there very few developers out there that can start my heart racing and get the release dates of their newest games marked on my office calendar without me having at least some pre-purchase experience with the game…and Valve’s one of them.

Portal 2 is set for release on April 21, 2011 for all platforms and will (obviously) be available from Steam as well.