Everyone is curious as to when we will get details on the next Grand Theft Auto games. Most of the rumors claim that GTA will return to San Andreas, which makes me quite happy. Grand Theft Auto: San Andreas is, in my humble opinion, the best game in the series. The depth of this title is amazing.

It would be an understatement to say that Rockstar is a developer with a lot of personality. This is the first title in the Grand Theft Auto series that truly harnessed that personality. For starters, the locations have their own distinct and appropriate feel. Los Santos feels like it is LA in the 90’s. There are several gangs fighting amongst each other over what color of the rainbow is prettier (or maybe it’s drugs and money, but who’s keeping track?) As you drive through LS you really can tell if you are in a good or bad neighborhood, and the rival gangs will be sure to let you know about it. The story surrounding LS contains criminal mischief ranging from: home invasions to street racing to gang wars. The California countryside is filled with plenty of free spirited individuals. Most of these people are filled with a good dose of crazy or paranoia, but what else would you expect? San Fierro is a wonderful interpretation of San Francisco that contains a very strong Asian crime influence, cable cars, and even mimics some of the very distinct neighborhoods in San Francisco. The final location within this title is Las Venturas (Las Vegas) and the desert. Of course, this location is a hit as well. The Hoover Dam, casinos, and even Area 51 find their way into San Andreas. Nothing says glam like stealing a fancy car and cruising down the strip. 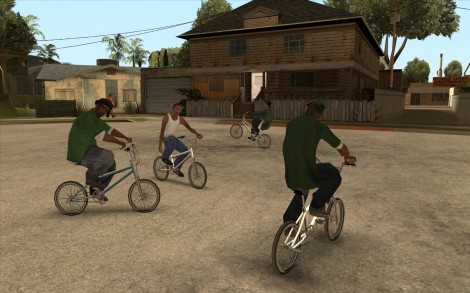 Biking through the hood is theraputic

Somehow Rockstar took all of these very different, stand alone areas and connected them with a wonderful story. If you have not played this game, just know that SA is huge. The story of the game takes many twists and turns as you make your way across the vast game world. I could sit here and attempt to explain the story, but if you know GTA games you will know that a story explanation would be this entire article. Yet, there is a very specific tone within this major story. Carl ‘CJ’ Johnson’s story, at the end of the day, is about escape. The game starts with CJ returning to a life he escaped. He returns only because of his need to help his family, but some of them betray him. CJ must scramble to save his blood family, and is forced to leave Los Santos against his will. Along the way, CJ has to deal with drug farmers, the Triad, the Mafia and crooked cops and ends up turning into an errand boy for a large chunk of San Andreas. CJ eventually finds his way back to Los Santos by helping a rapper get his life back. Ironically, CJ stole that rapper’s life from him. Even Jerry Springer couldn’t find a story this complex. So far, CJ has been the most believable character within the GTA series. I can really buy into the story of a young man returning home and rejoining his old gang to then find himself in way over his head (most times against his own will). What made the story great is the fact that CJ never wanted to go back to Los Santos. He left that life and was forced to return.

San Andreas is not your average GTA title. The developers injected small RPG elements that are the icing on the cake for this game. When the game starts CJ is a scrawny guy who is poorly dressed with a bad hair cut. Of course, CJ is urged to hit the gym and and go buy some clothes sporting the gang’s colors. CJ also has the ability to improve many skills as the game progresses. CJ isn’t the best driver nor can he shoot a gun very well. There is even a point in the game that you must learn to fly. Through repetition, CJ will improve all of these skills. Most skills are easily tracked via a meter that can be pulled up during gameplay. Even CJ’s sex appeal is closely monitored. The best RPG portion of this game is the reputation meter. CJ can increase his reputation within the gang in various ways like working out and gaining muscle, wearing the right clothes, having a good haircut, and getting tattoos. He will also be asked to complete various tasks for the gang. The tasks range anywhere from drive-by shootings to stealing weapons shipments off of trains. Completing the tasks will add points to the reputation meter. It can be frustrating because, at times, a mission will reward only reputation and provide no cash. As CJ’s reputation grows, he is able to recruit members of the gang off the street to go with him on his missions. Having back up is very helpful in many missions due to their scale and difficulty. The reputation meter surprisingly adds to the story element. You can feel the respect from the non-playable characters as your meter increases. Reputation makes you truly feel bigger than San Andreas. 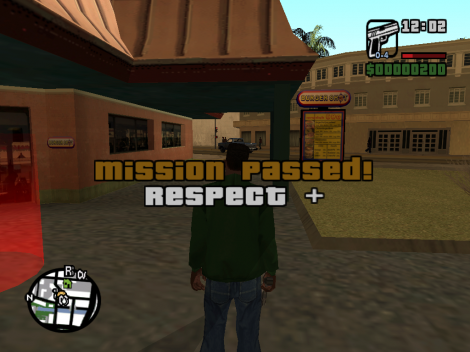 This game is brilliant. There isn’t much more I can say about it. When I think of Grand Theft Auto, I always run back to San Andreas. There is nothing more satisfying than cruising through Los Santos with a TEC-9 will listening to some old school 90’s rap. Don’t forget to hit the three wheel motion.