Recently, there has been a lot of talk in my hometown paper about a Constitutional amendment to ban gay marriage that is currently working itself through the Indiana statehouse. (Same-sex marriage is already illegal by statute in Indiana, by the way). I’ve been disgusted by the letters that community leaders have written in support of the legislature and it has made me a little less proud to be from the place where I was born. Basically, it boils down to blatant homophobia. Sure, these people would say that they love Gay, Lesbian, Bisexual and Transgendered (GLBT) people and, in fact, have “many friends” who would self-identify as GLBT, but we all know the real story behind such statements. These letter writers continually reference the Bible’s rule that marriage should be between a man and a woman. Yet, in the same book of the Bible that they often turn to for justification (Leviticus), the wearing of clothes made out of more than one fiber is also proscribed. Does this mean we should have government interference outlawing the cotton blends we wear every day?

How does this relate to video games? In this week’s Horrible Show we were inspired by fatuglyorslutty.com and centered our discussion on the misogynist guys who troll the multiplayer gaming lobbies. The concept behind Fat, Ugly, or Slutty is to out the guys who send lewd voice and text messages to the girl gamers of the world. The website gives girls a chance to get revenge on these idiots by plastering their gamer tag and message on the internet for all to see. Although girl gamers get a brunt of the abuse from these guys, racism and homophobia also rear their ugly heads in online gaming lobbies.

Hate comes in many flavors

Racism has been an ugly part of this country’s history since it was founded and sadly, its presence continues today. Even though it is less prevalent in public settings, the anonymity that online avatars provide makes it easier for closet racists to show their true feelings. Because of its popularity in the rap and hip/hop music genres, the word “nigga” has evolved a second meaning as a term of endearment to people, even outside that genre of music. I have heard people other than African Americans use this word in a non-negative way, but the idea of the word and its genesis is one of racism and has no place in the real world or online.

The same thing goes for being called “gay” or a “faggot.” Don’t get me wrong, I used to use the word “gay” to describe things I didn’t like or I thought were stupid. I used it for years, never meaning it to offend a homosexual person but never realizing the affect it might have when said around someone who was gay. I learned my lesson when I used it around a lesbian couple who were friends of a friend: they took offense to my usage and rightly called me out. It was just my ignorance that led me to use the word and now I cringe when I hear it being used elsewhere, especially online. 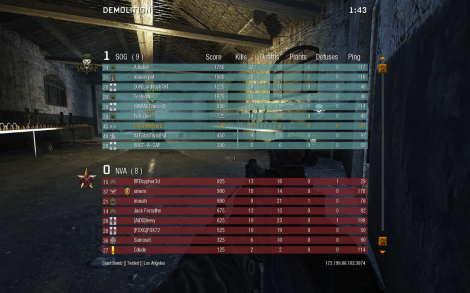 The beginning of the end.

At this point, it is just a fact that when you play Call of Duty, you will be called a racial or homophobic slur. I don’t know if it is just because of the lack of creativity in the insults or if they people who say them are just racist idiots, but after I’ve won a round of Modern Warfare it’s pretty common for me to be called a “nigger” or “faggot.” I didn’t realize that my superior ability on that specific map subjected me to such hate.

If you don’t speak up, you’re part of the problem

I know that developers don’t condone this sort of behavior and have to be appalled by the fact that it’s rampant within their games’ multiplayer environment, but being appalled isn’t enough:  they need to step up and make sure this type of hate doesn’t happen. Hey, developers, if you are opposed to this type of behavior, what are you going to do? First off, show that you are opposed to it. I have barely heard anything from any of you about the situation. Show you care by blocking these users and their IP addresses. If they complain and are underage, let their parents know. These are small steps to take to fix a huge problem.

If you imagine the audience that has been driven away from games like Call of Duty or Halo, you have to wonder: do developers and publishers not care about the issue because these games are already guaranteed to sell in the millions? I would think that selling more copies would be the goal of any game creator. An online game environment that is hate-filled is inherently incongruent to growth of a gaming audience. If I was a developer or publisher, I would be doing everything in my power to try and stamp out the unchecked bigotry populating online games. Sure, they might hear an initial backlash like Blizzard did when it proposed Real ID, but one of them has to take the first step, and stand up to make a difference. Even if the moral stance doesn’t inspire others to follow, increased sales to female or GLBT gamers who have previously avoided multiplayer-focused games because of their caustic environment is a pretty convincing argument.

I have always thought that the more gamers there are in the world, the better the world would be. I love having a forum to share my thoughts and ideas about video games, and  to be able to bring new people in and share experiences with them in this medium that means so much to me is one of the great joys I have. That’s why I don’t understand where the online trolls are coming from and what they’re trying to achieve. People who rag on “noobs” because they’re new to a game,  girls because… well, they’re girls, and homosexuals because of who they’re attracted to are discriminating for no good reason against people who fall into those ascribed groups. I’m sure the stereotype of a gamer living in his mom’s basement and never knowing the touch of a woman inflames those gamers, so you have to wonder why they’re continuing the cycle.

Discrimination based on sex, race or sexual orientation needs to be stopped, not only in the real world but in the online one as well. It is driving away new and old gamers alike and perpetuating the negative stereotype of  what it is to be a gamer. I’m not worried about my name being sullied because I act like a human being when it comes to those online interactions… yet I wait for the eventual backlash that will come from the non-industry media once they find out the prevalence of bigotry in online gaming. Before the gaming world gets to that point, those of us who care about the industry, whether we’re developers, publishers or just end-users, need to stand up and police these multiplayer games ourselves. It doesn’t seem like anyone else is going to do it.